Hunter and Jackson are TWO!

My sweet babies are officially toddlers and they continue to grow and learn so much.  I can't believe we've gone from these tiny preemie babies to big truck loving boys- boys that are so tall for their age.  In some ways, it feels like I've blinked and this happened and in other ways, I can't even imagine life without them.

Two years with twins has been one wild ride. 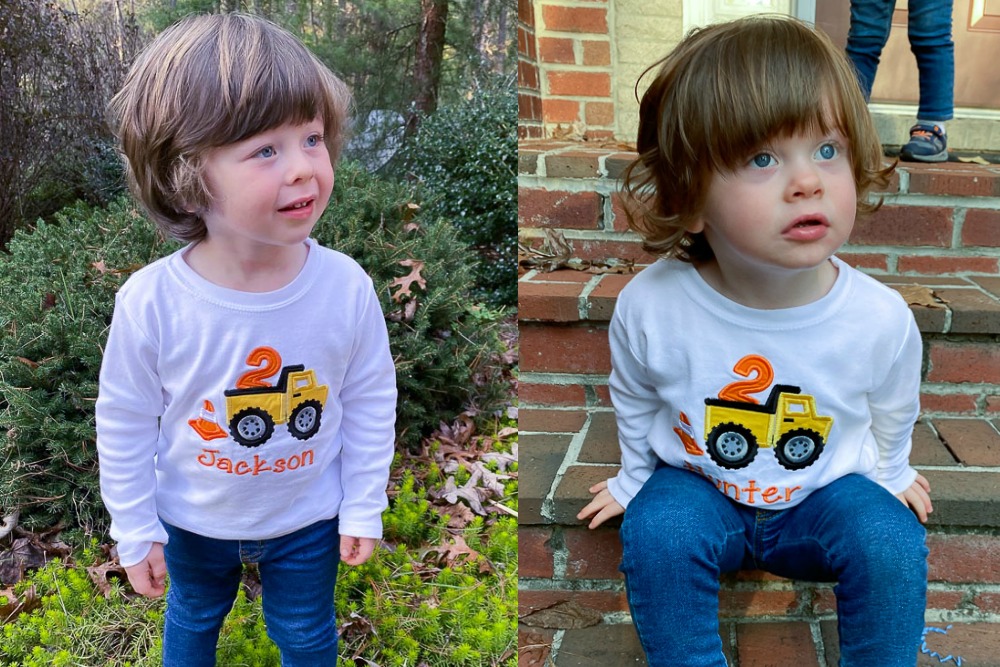 Since my last update, Hunter and Jackson have become a lot more verbal and are able to tell us what they need more often which has helped some with the fits and screaming making us all a bit happier.  They still sometimes have trouble verbalizing what they want or need and scream but it has gotten SO much better even in the past month.

They both string several words together in sentences now and I laugh daily at something they say.  They have the sweetest little voices that are a joy.

We continue to work through the challenges of raising kids in an unsettled world.  We've kept mainly to ourselves but were able to find some safe activities for the boys to get out of the house, which was exactly what we all needed.  I'm once again a bit heartbroken that I haven't been able to take the boys to traditional kids storytimes, classes, and playgroups but I'm grateful that they are too young to know that they are missing anything.

I like to recap the fun things they did over the past three months, so let's dive in!

August involved LOTS of water.  We played outside every weekend with some combination of the kiddie pool, water table, and sprinkler.  The first time they played in the sprinkler was hilarious. 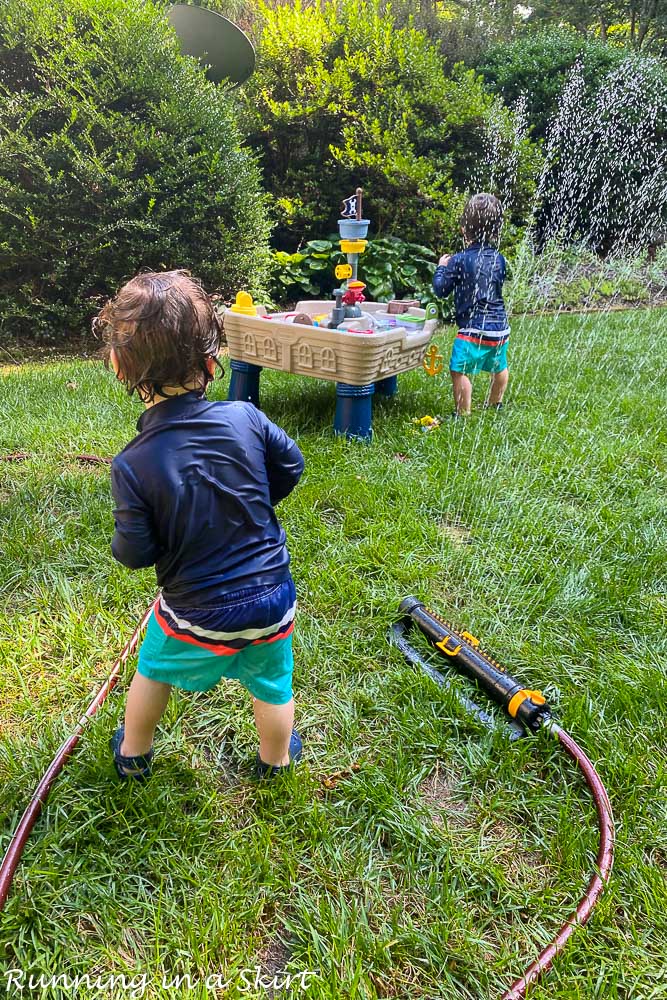 We also found a little spot along a local stream that didn't have any people near it.  We took the boys several times to play in it and it was a great activity to get out of the house. 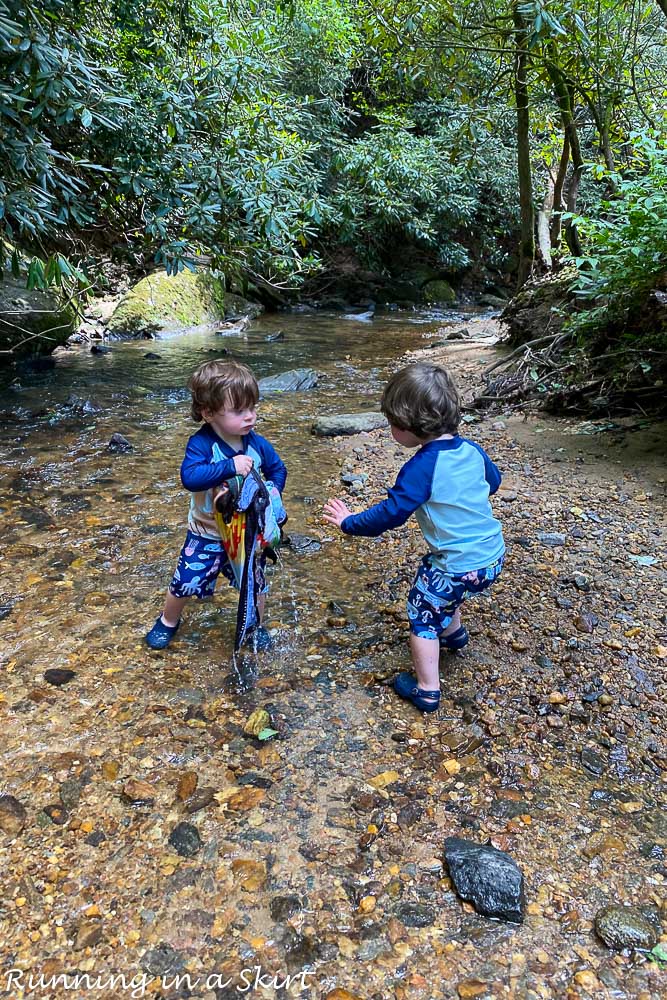 In August we also took the boys back to Hilton Head for a week at the beach.  This was actually the only trip I had planned back in January that actually happened, so it was so refreshing. 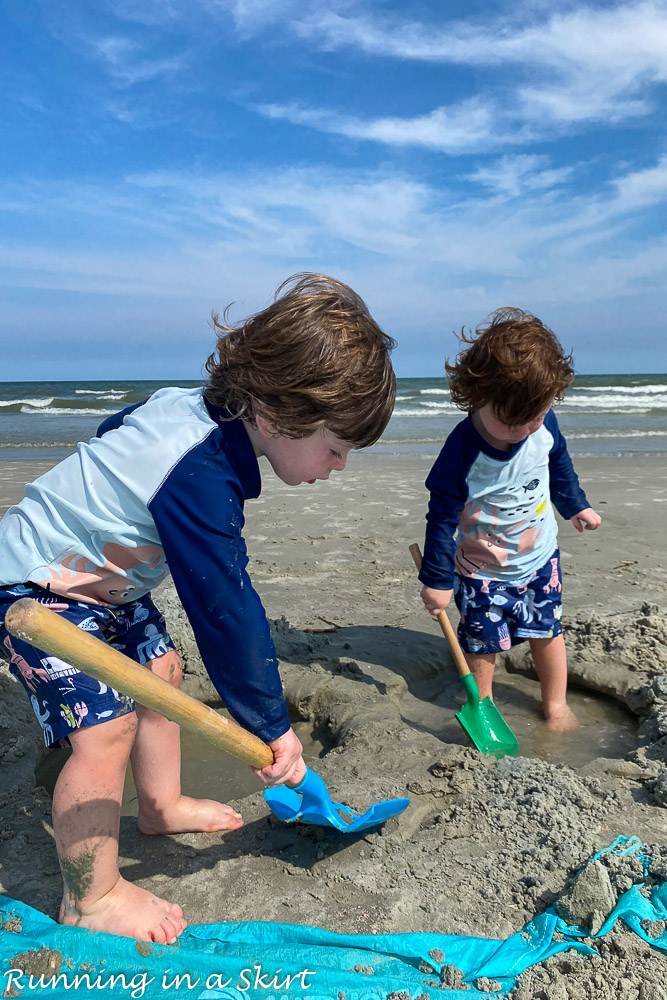 The boys had a blast and we all loved getting out of the house and having a change of scenery. 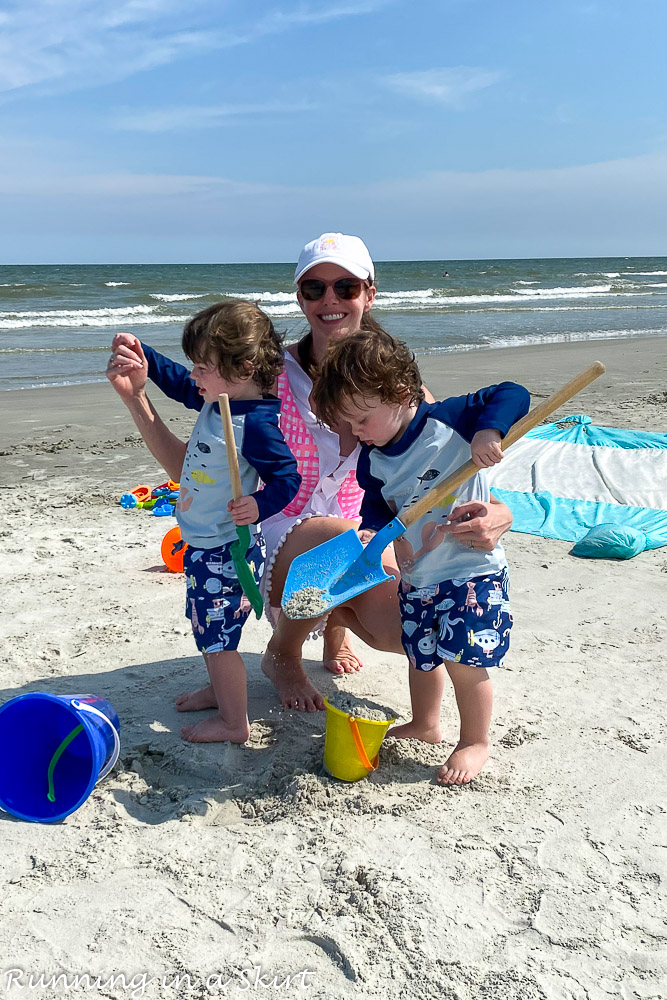 Back at home, we took the boys to the Biltmore to see the sunflowers. 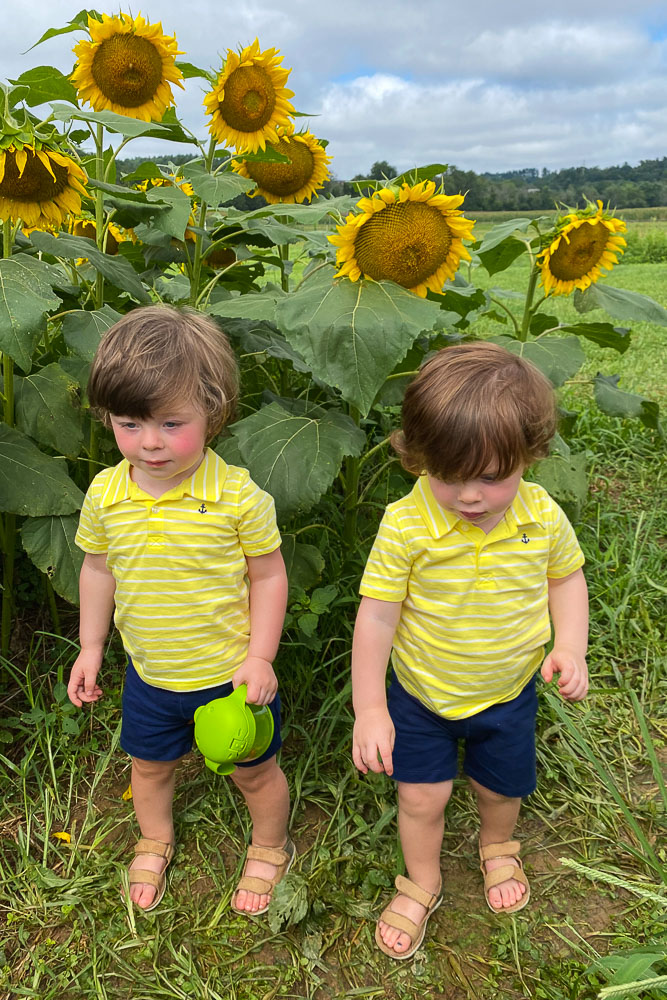 We stayed away from crowds and they still got to see all sorts of animals which was really fun for all of us.

And to continue with the water theme we also went to a nearby lake to feed ducks.  The boys were a bit obsessed with the seagulls at the beach and were equally enamored by the ducks. 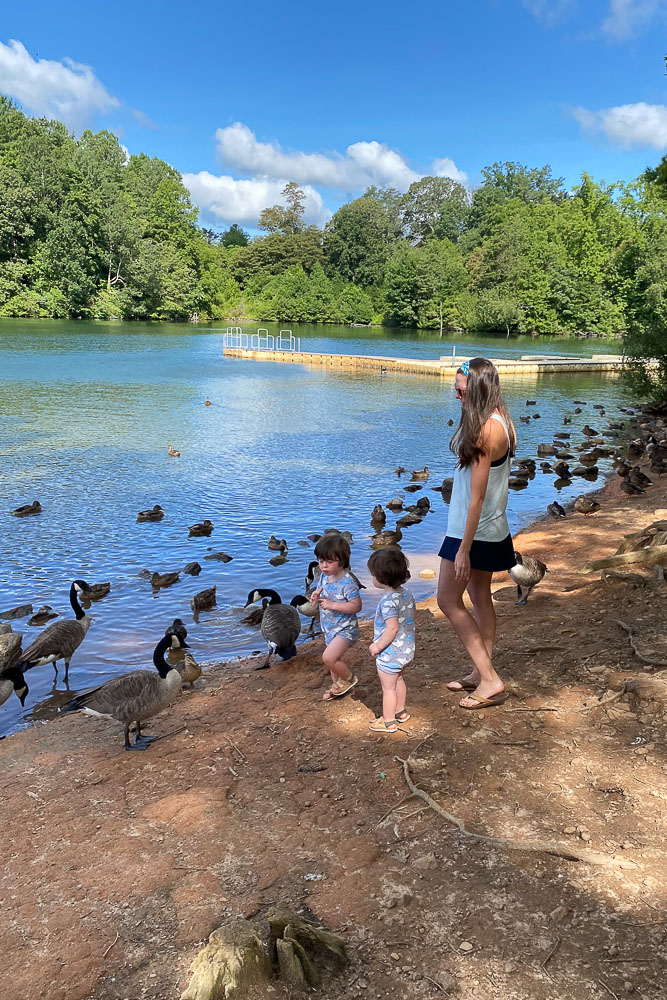 We rounded out the month by learning how to ride scooters! 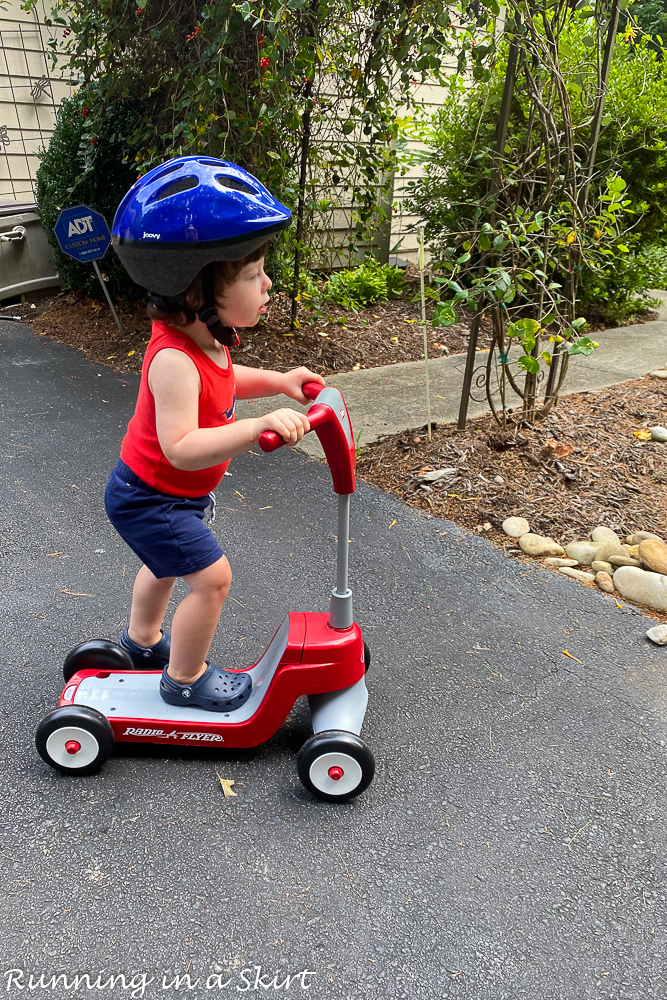 Both boys enjoyed it so much and surprised us with their skills. 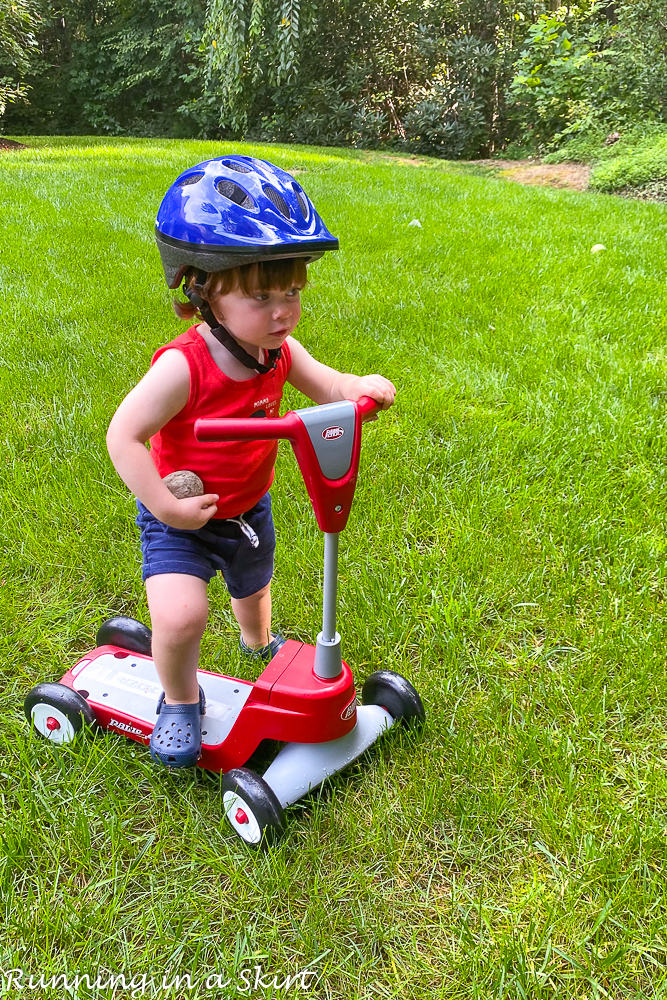 In September we took more trips to the lake to see ducks and started some walks around the park. 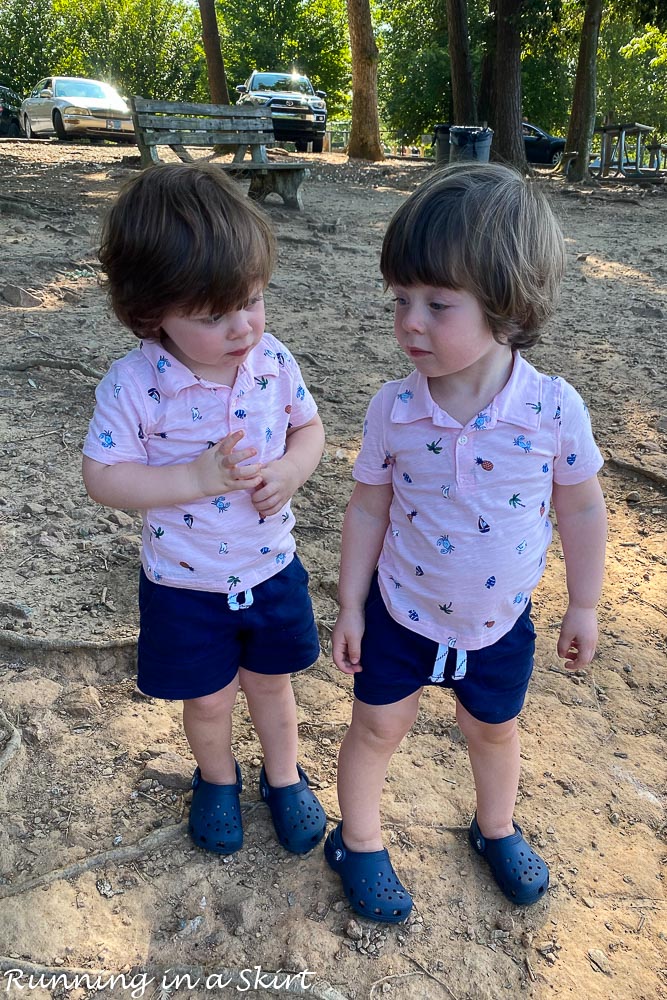 We also went back to a spot along the stream to throw rocks.  It wasn't warm enough to play in the water but rocks are plenty of fun for the twins. 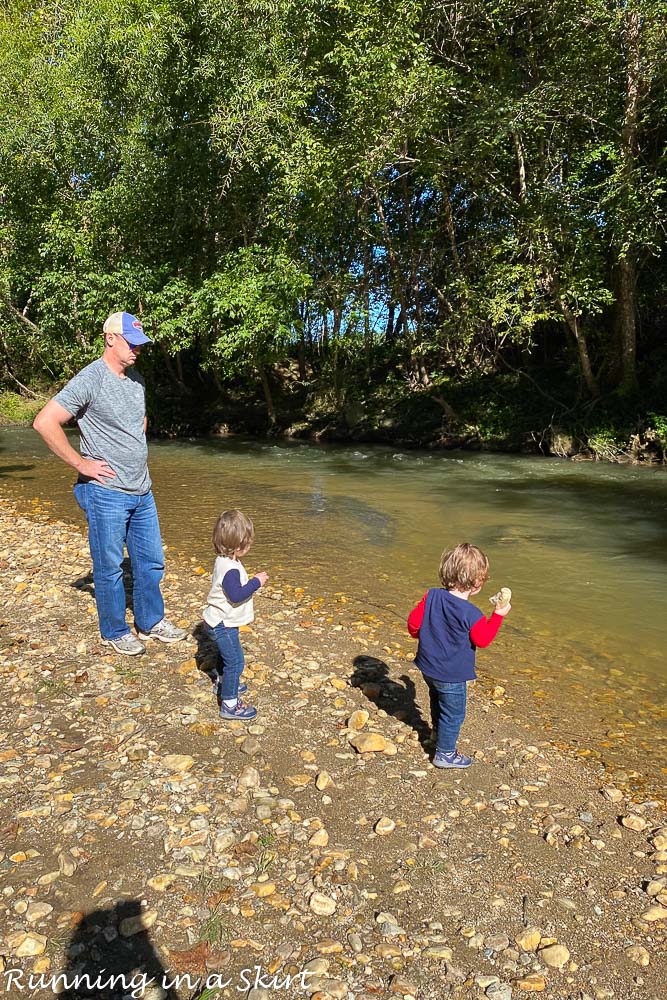 In mid-September, we snuck away for a quick weekend on Kiawah Island.  Our trip got canceled and then rescheduled due to a Hurricane but we were so glad to go. 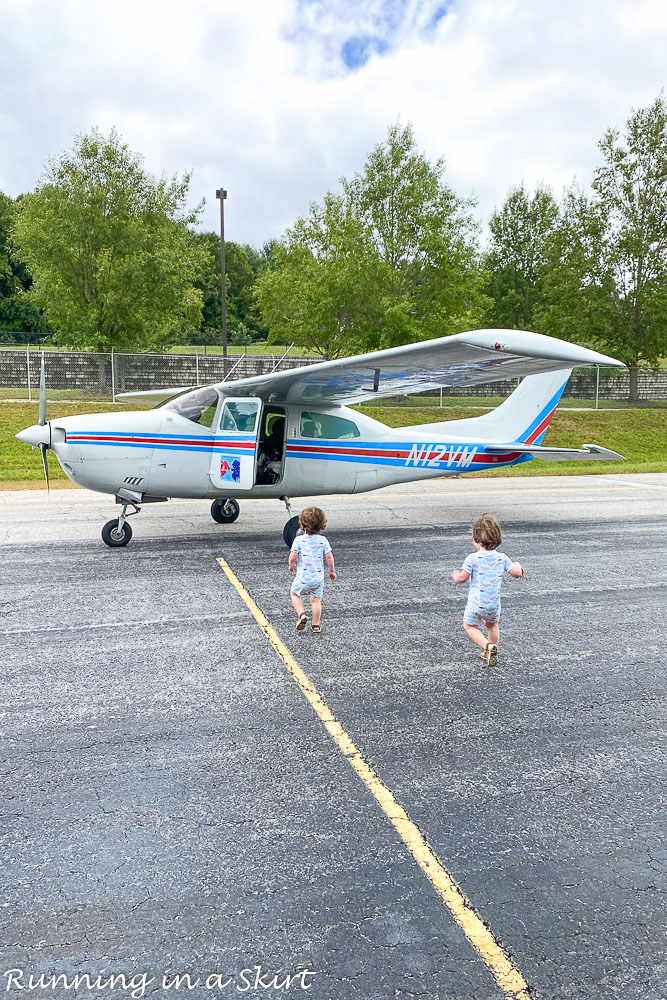 The boys really got the hang of running in and out of the waves on this trip. 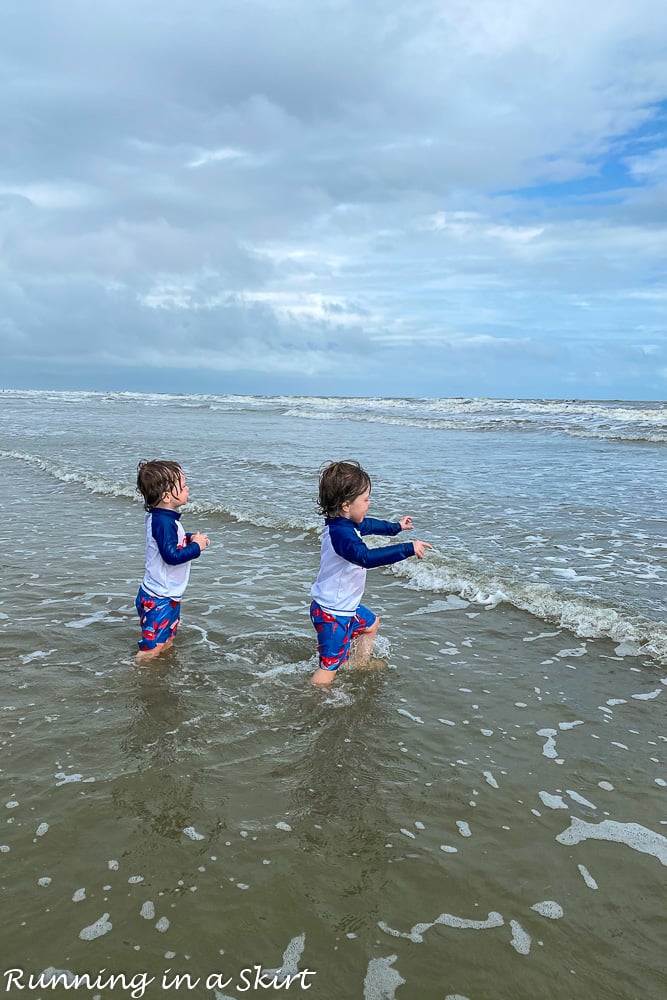 Back at home the boys got braver with their toys and started riding their giraffe toys down the hill in our yard.  It was also hilarious. 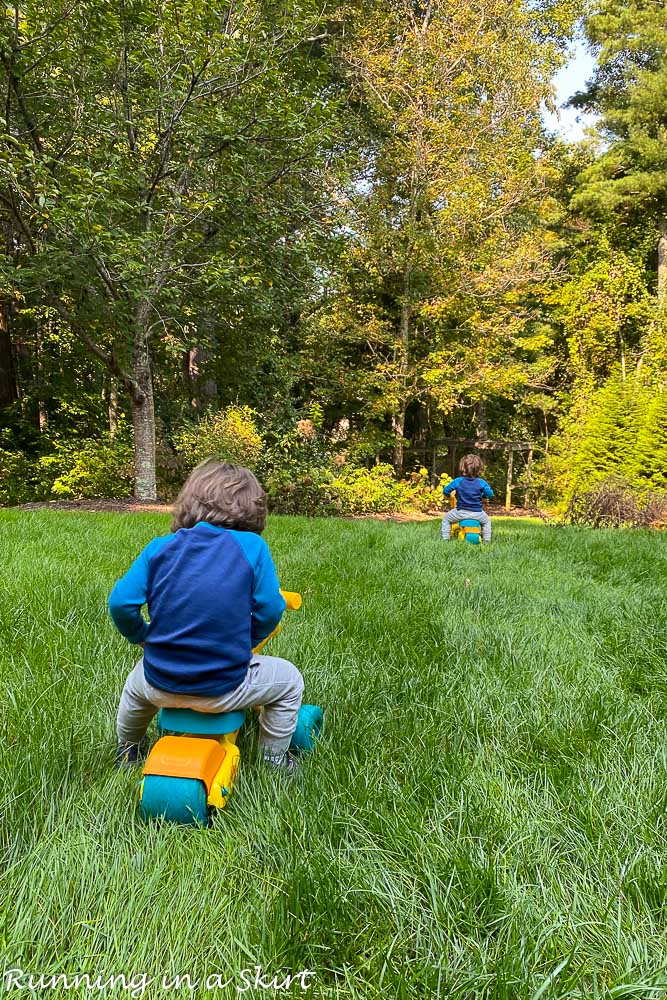 They also spent hours and hours mowing our driveway. 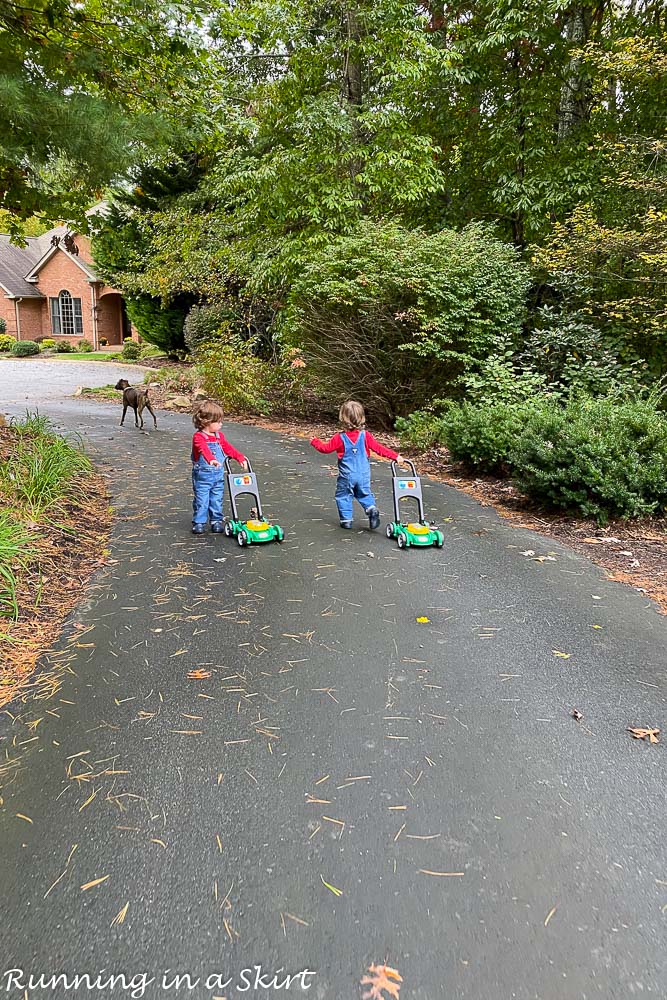 In October we made the slightly crazy decision to take another beach trip.  Like most people, we had several trips canceled in the spring, so we still had a bit of the travel bug.  I found a great deal on a condo in Amelia Island so we went and had an amazing time.

The beach is one place the boys can really play and they had huge stretches of sand all to themselves. 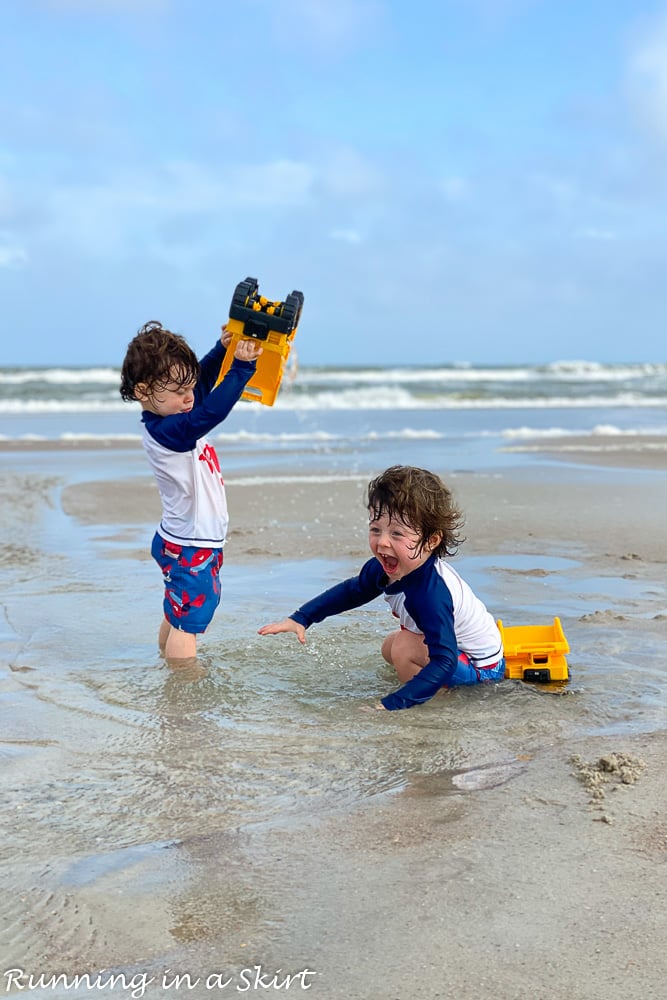 My Dad and Margaret even came over from Orlando to see us. 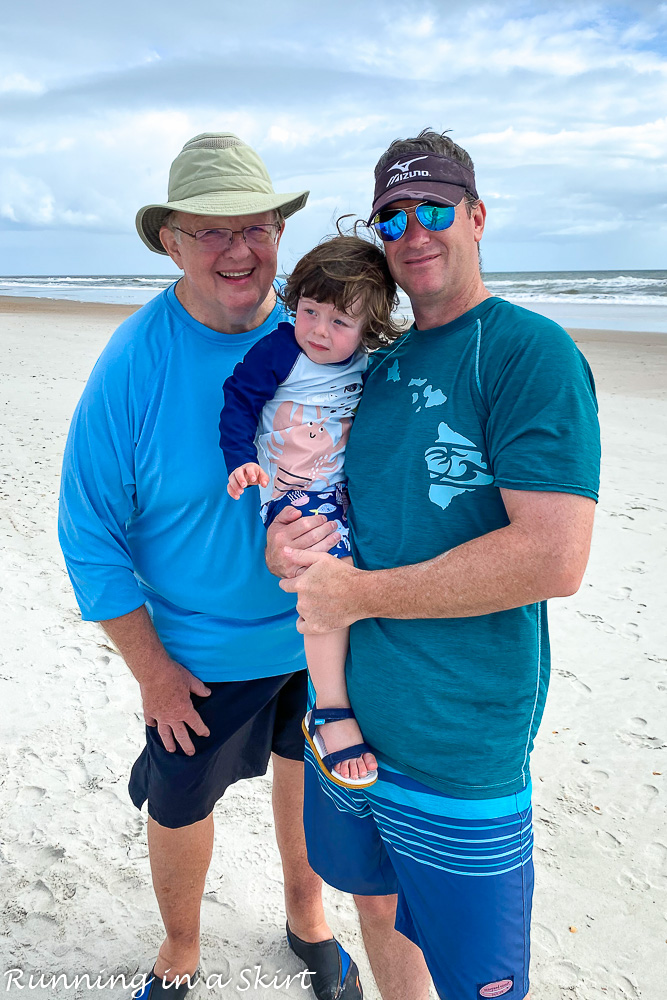 We got back from the beach and rolled right into Halloween with THE CUTEST monkeys.

I planned a fun day for them involving a pumpkin hunt and pumpkin painting.   It wasn't a traditional Halloween with Trick or Treating at all, but we made the most of it. 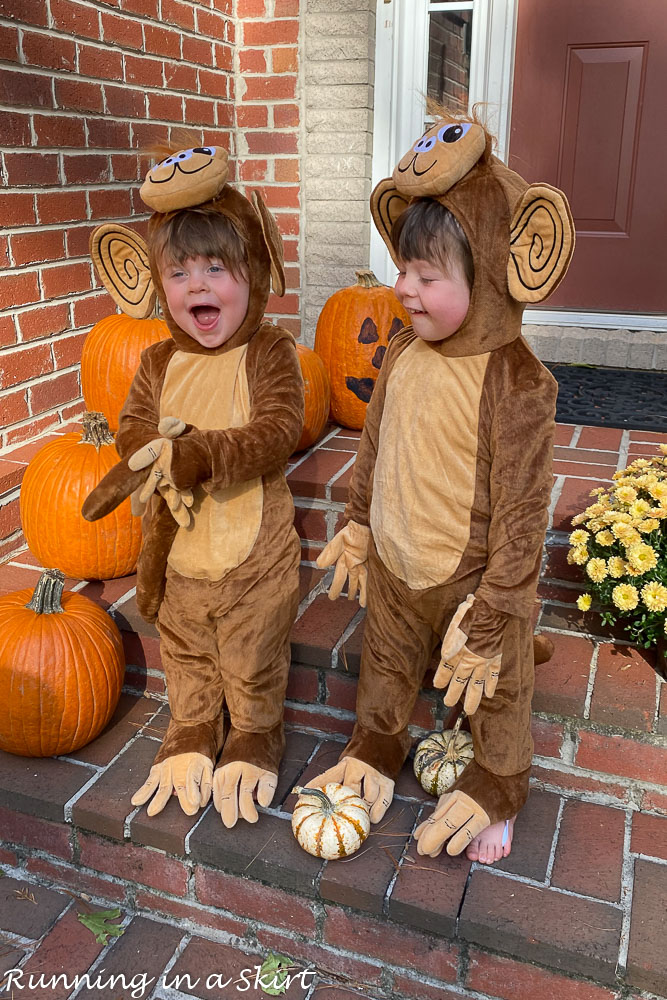 Another highlight of the month was seeing the boys love this wooden house my Grandfather made.  It's a family heirloom! 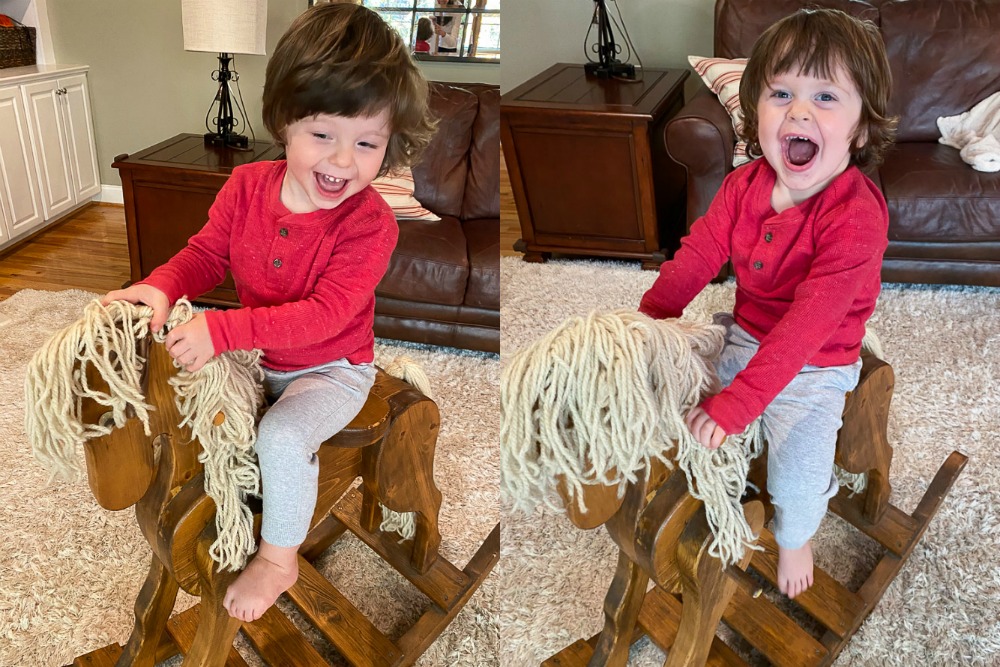 On November 14th the boys turned two and we celebrated with a fun weekend at home with the Grandparents.  The weekend had a TRUCK theme because the boys have become obsessed with all things trucks in the past few months.

We didn't have a traditional party but it was still fun to celebrate. 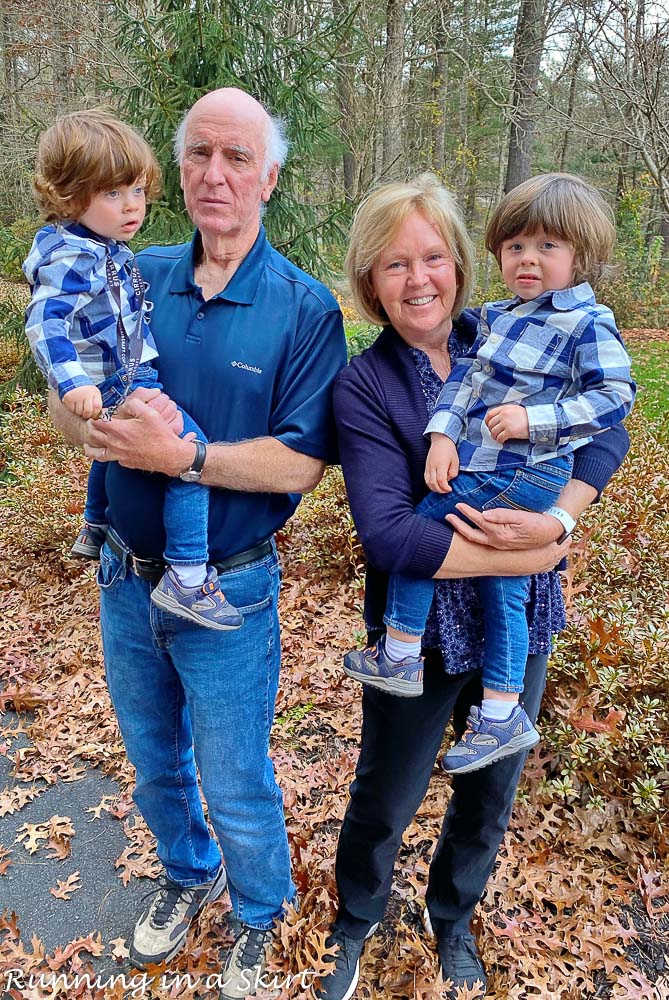 The boys got amazing toy trucks and loved everything about their truck themed day. 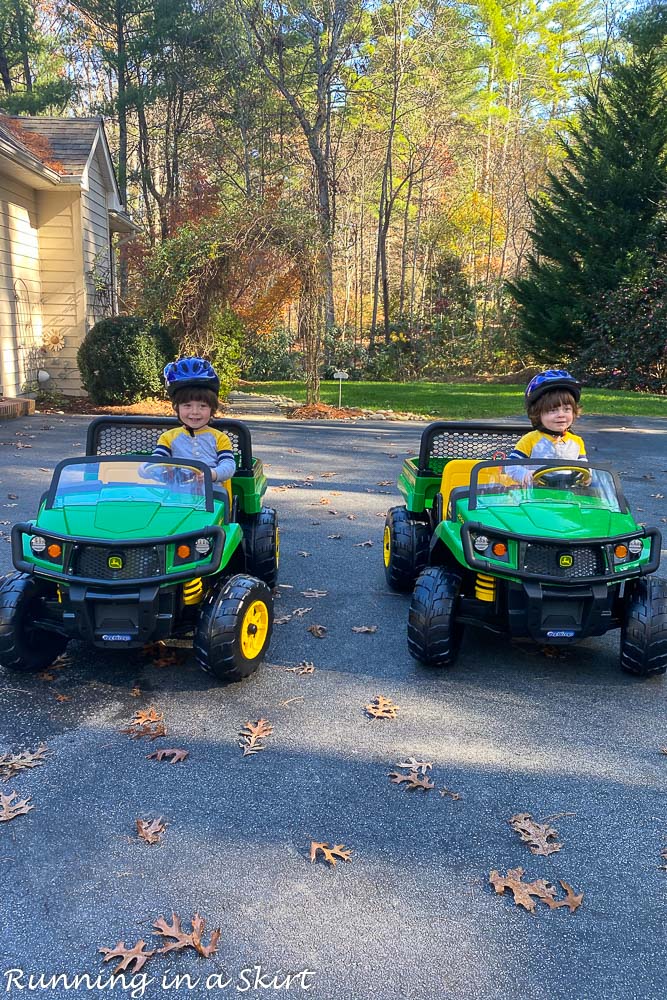 And just like that, they are TWO!  I'm so glad I have this online journal to remember how much they've grown and changed and all the good moments.

Hunter and Jackson have grown into two very different boys with distinct personalities so I wanted to also share a bit about them individually.

Jackson is a force.  He's strong, funny and when he's happy the whole world is happy.  He's still a ham with big grins that can light up your day. 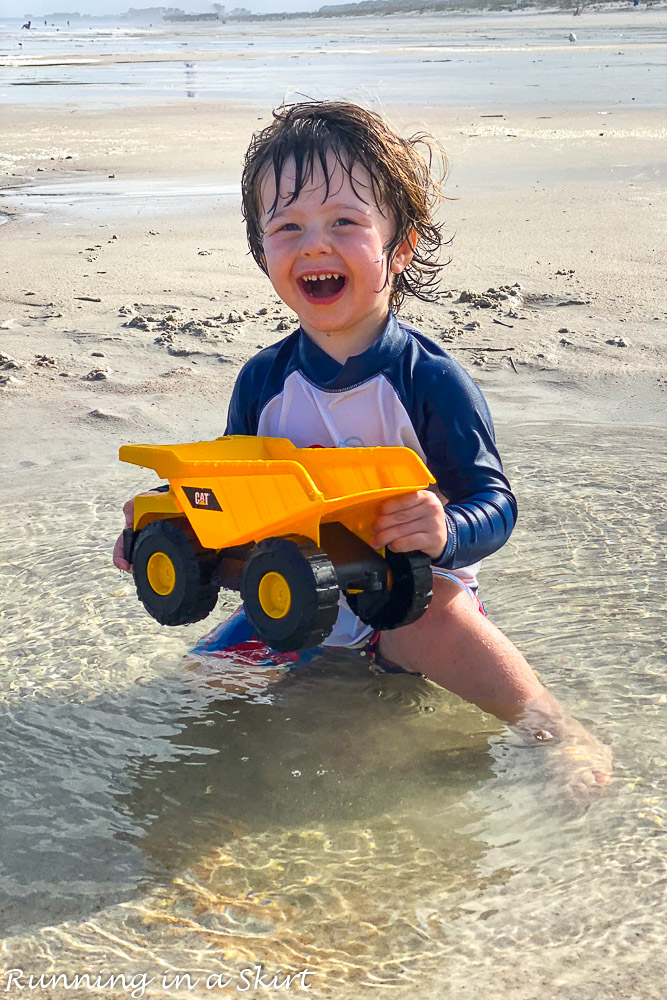 Like most toddlers though he can be a bit challenging when he's not getting exactly what he wants.  We are still working on sharing with Hunter.

Jackson likes things neat and orderly and will put toys back or adjust them if they aren't in the right spot.

He still has a thing for picking up or knocking over large things and carrying them. 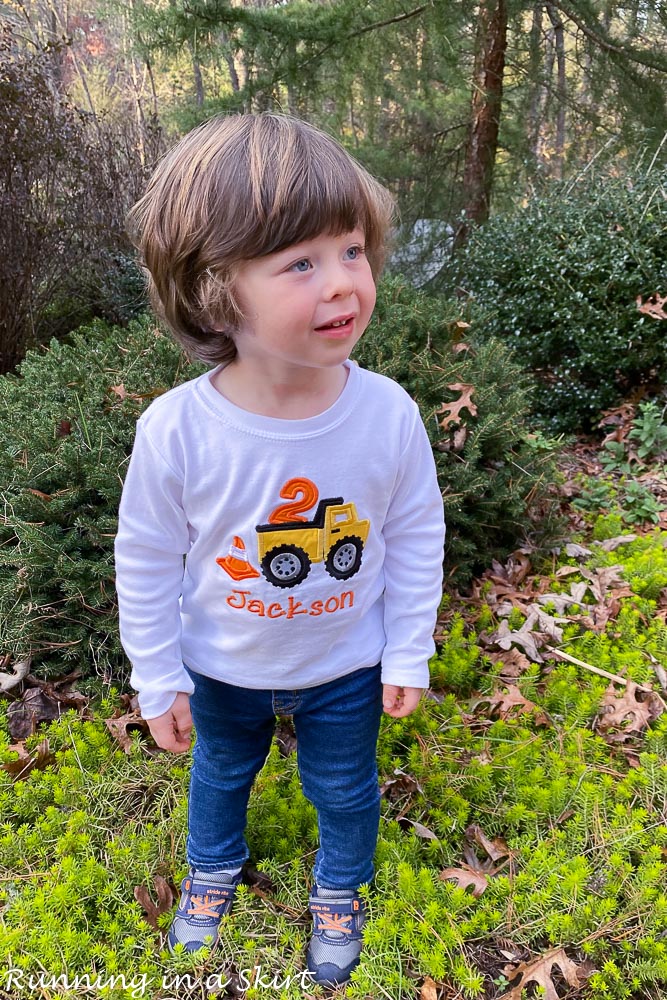 His napping is hit or miss.  He sometimes fights to go down and often sleeps much less than his Brother.  I'm pretty sure he thinks he doesn't need a nap... but Mama does. 🙂 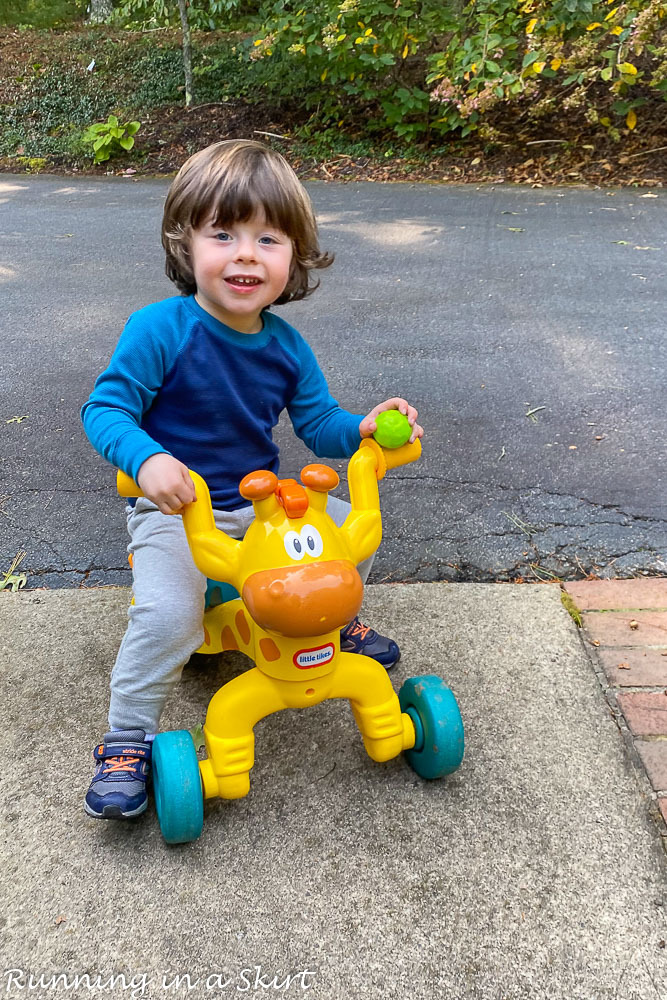 Jackson likes books and will repeat his favorite ones back to you.  He likes to "read" our MAMA! book and howl with our dog book.  It's the cutest thing you've ever seen.

He loves trucks, riding toys, his red car, and books. 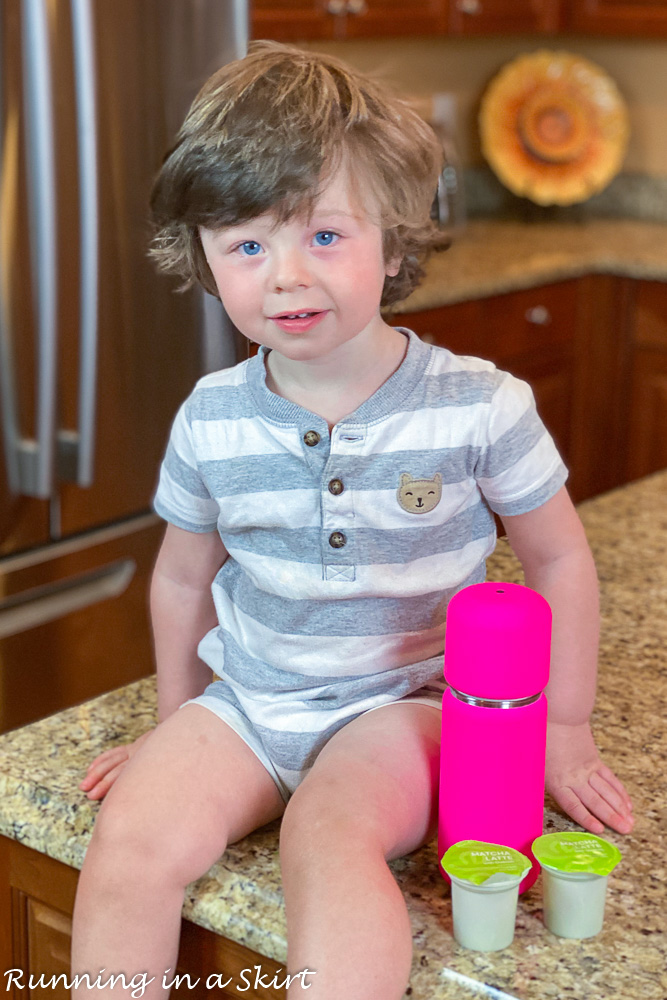 I adore my handsome two-year-old and count my blessings that I get to be his Mom.

Jackson is still a very big boy.  He's 38 tall and 32 pounds.  Right now he is noticeably taller than Hunter and very tall for his age.

Ohhh, Hunter.  There is nothing better than a good cuddle from Hunter.  He's my sensitive and gentler boy.  You have to work a bit harder to get a smile out of him but when you do you know it's real. 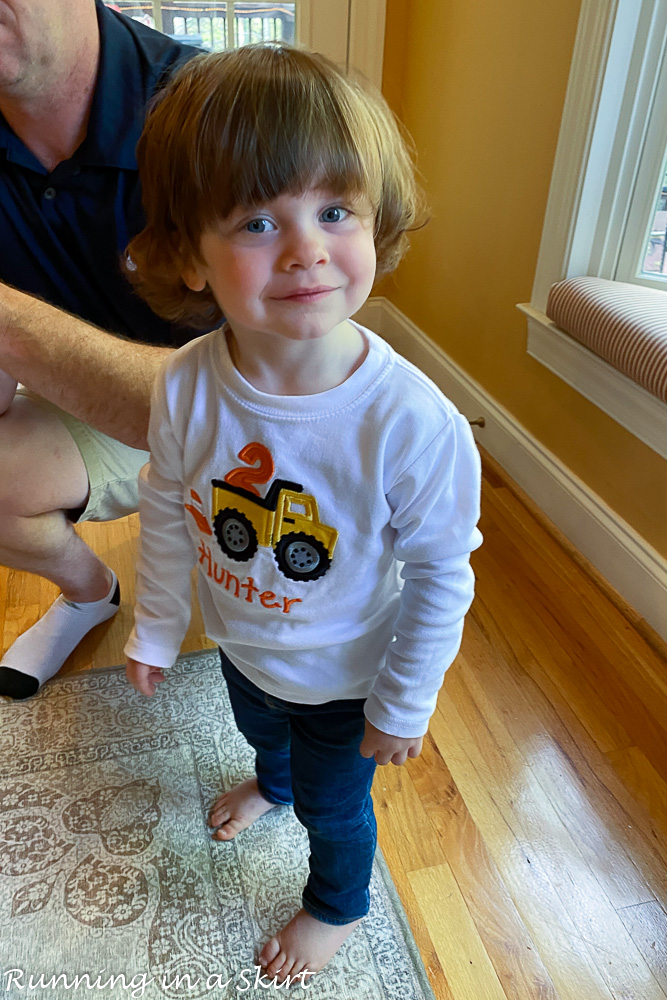 Hunter still likes to be held and cuddles but considering he's over 30 pounds he's not quite as needy as he used to be which makes my arms happy but my heart sad.

He also has toddler tantrums that we are working on.  He's a bit better at sharing.

Hunter is a chatterbox these days saying all sorts of words and sentences. 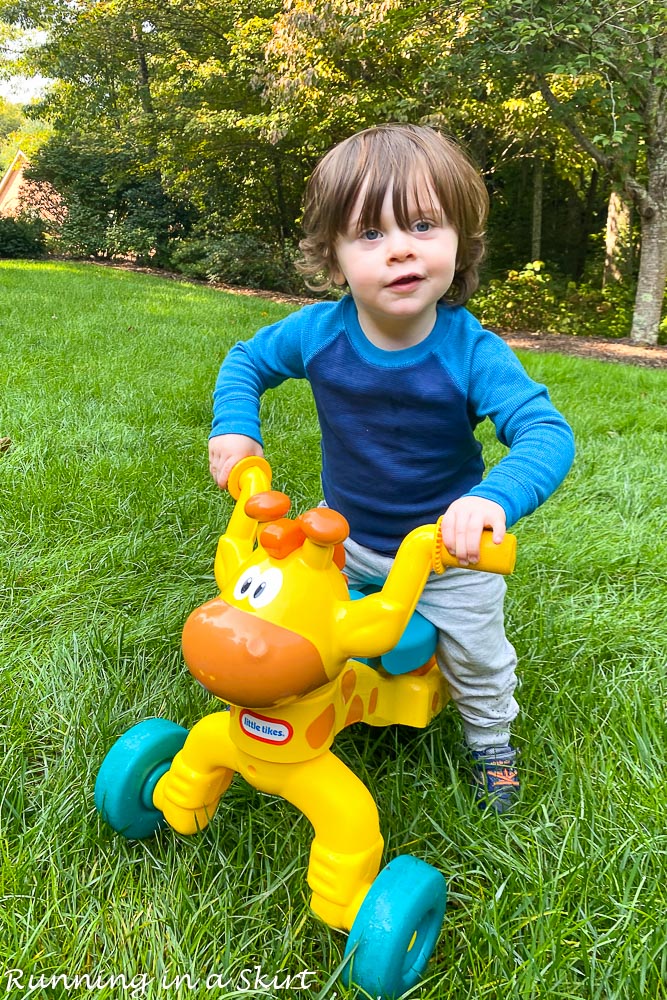 He loves to sit on your lap and read. 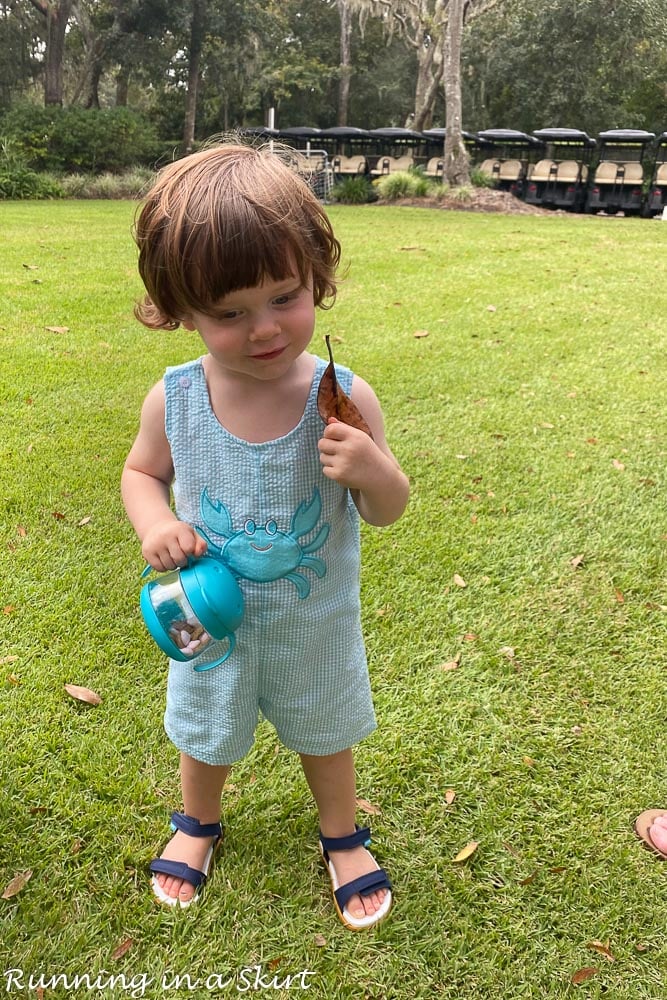 Hunter is a good napper.  He only gets his beloved binkie at nighttime and naptime so that keeps him very happy.  I have absolutely no idea how we are going to take it away from him.  It's his absolute favorite thing in the world.

Hunter is also a great eater and his favorite foods tend to fall in the sweeter category.  He's obsessed apple sauce pouches and fruit. 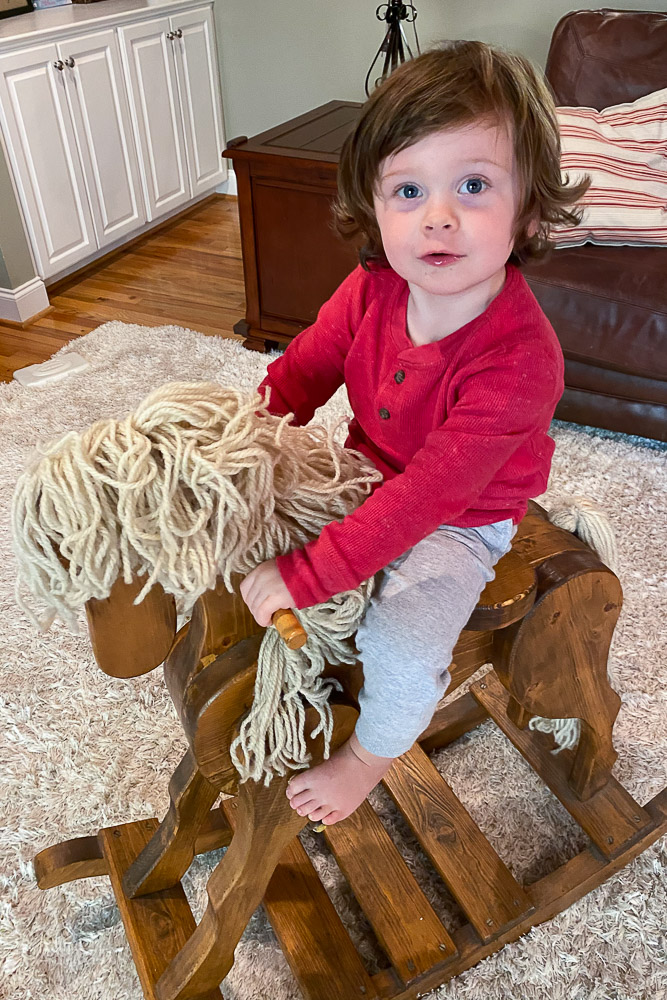 Hunter is a sweet, handsome boy and I'm so grateful I get to be his Mom.  I simply adore him.

Hunter is a big boy, but not quite as big as Jackson.  He weighs 31 pounds and is 36 inches tall.

We still live around a pretty strict schedule and I don't see that changing anytime soon.  I honestly feel like the schedule keeps us all sane!  It hasn’t changed since the last update but here it is. 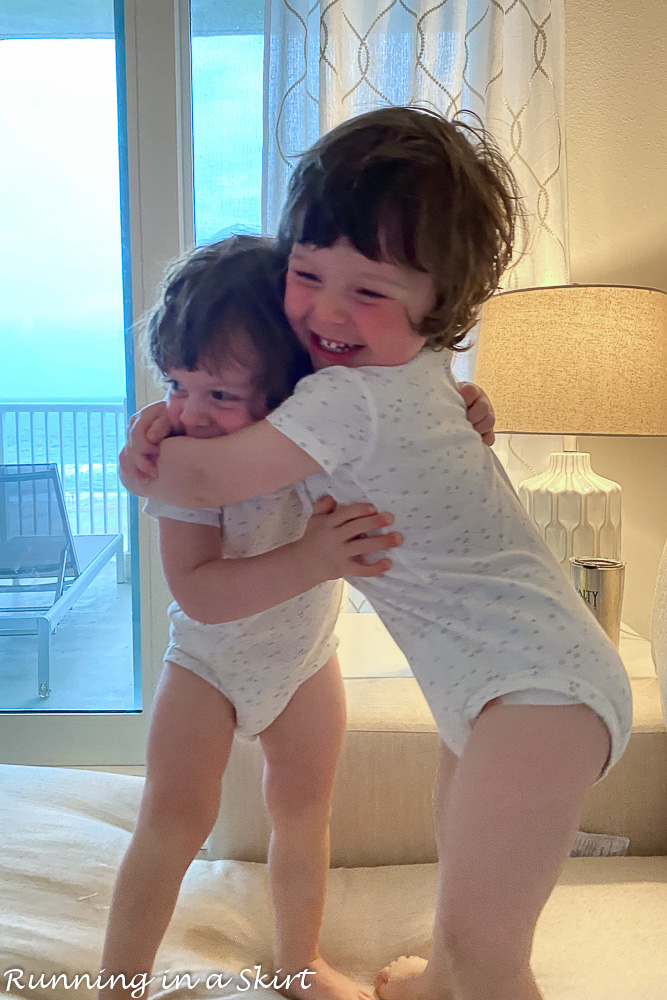 I could not have imagined that most of the boy's second year would be spent at home, but I'm so glad we've been able to keep them safe.  We are trying hard to focus on things we can do instead of what we can't.  Some days are easier than others.

The amount of change and development in the twins this year has been amazing.  We went from just muttering a few words to now having these remarkable humans that I can even have little conversations with.  I feel so blessed and lucky that I get to be the Mom of these twin boys who are so cute and special.  It is twice the work but it's also twice the love.  I'm so grateful that these cuties are mine.

That wraps it up for these updates!  I'll probably do one at 2 ½ and 3 but the season for the monthly ones is over.