I debated whether to continue writing these updates about the twins after their first birthday but at the end of the day, I've enjoyed writing them and going back to read them.  I wanted to have them and I hope you are enjoying watching them grow too! For their first year, I did the updates every two months but I decided to spread them out to three months for their second year.  This is their 13-15 month update! And yes, I'm a little late. This got pushed back to fit in the posts about the current crisis.  I figured a more light-hearted post could be good for everyone right now.

Hunter and Jackson keep growing and changing so quickly right before my eyes.  It's been the most incredible thing to watch as they slowly morph and change.  They are little sponges who are learning quickly and surprising me daily.  Sometimes I tell them to do something or go get something and they actually understand me which is incredible.  The boys have grown and become so much more like toddlers since their first birthday.  I'm loving this stage because they are so funny and wild but also so sad for those babies I'll never get back. 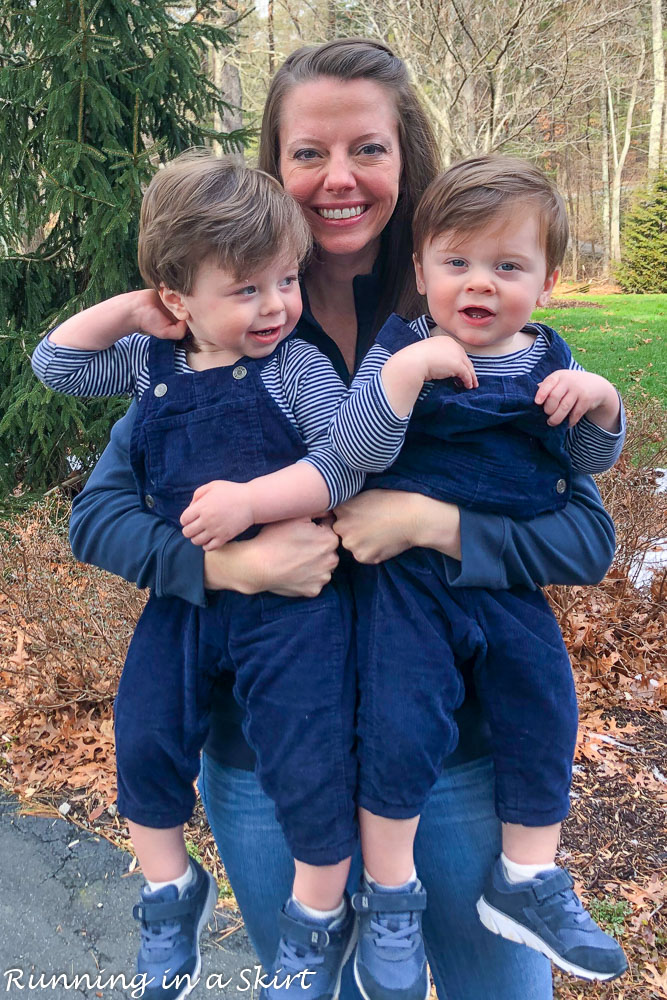 And here's a little glance back at them on their first birthday.  Isn't it crazy what a few months can do? 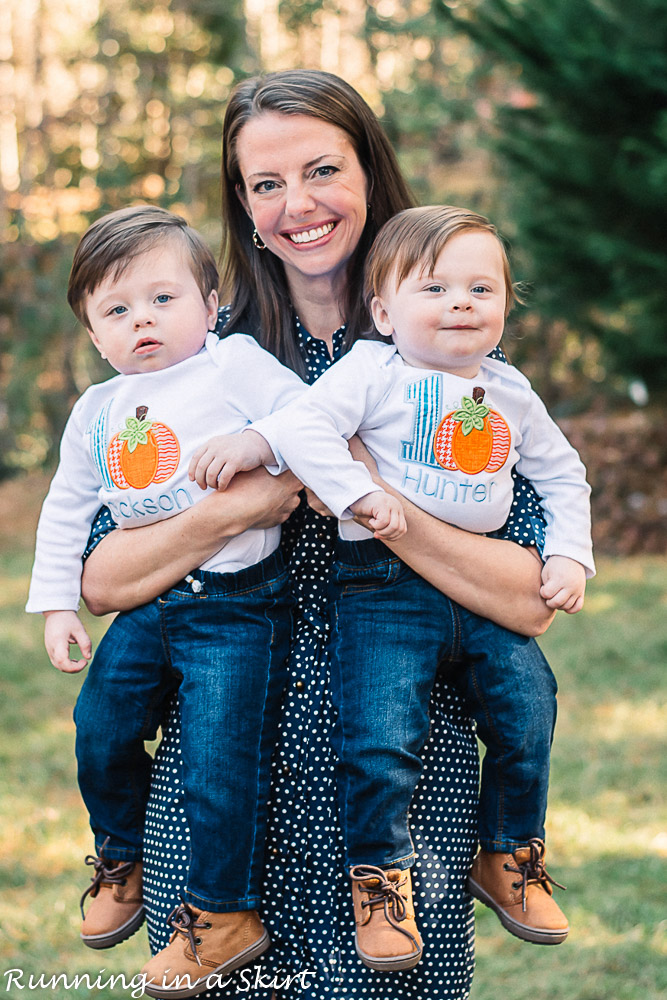 Once again there have been so many wonderful memories over the past few months.  I can't help but remind myself of them.

I'll kick off this update with Hunter and Jackson's first birthday party.  I couldn't help myself and went a little overboard with the planning and decor. 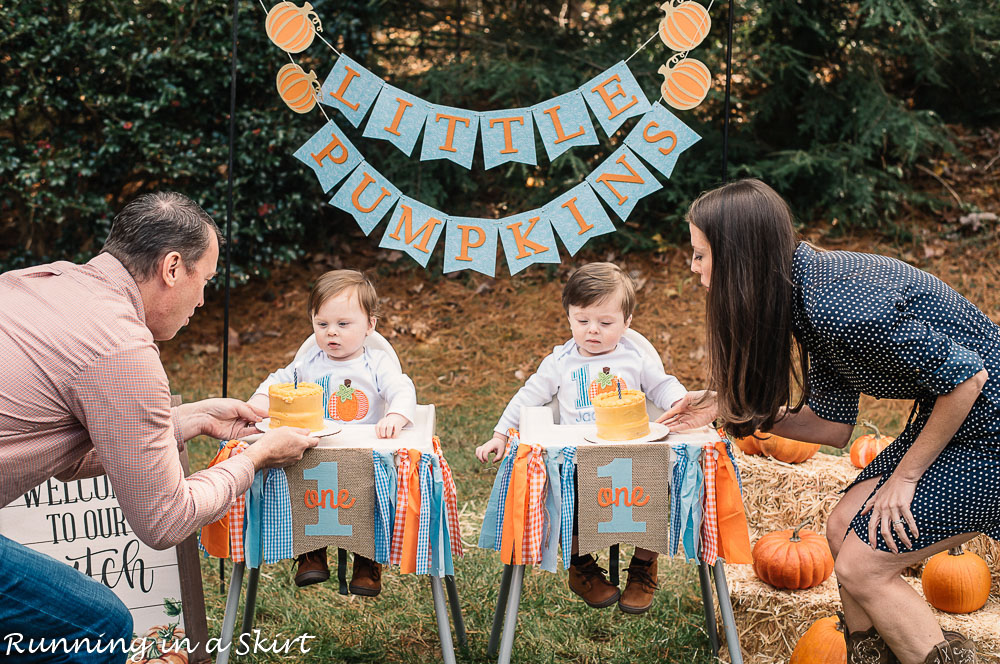 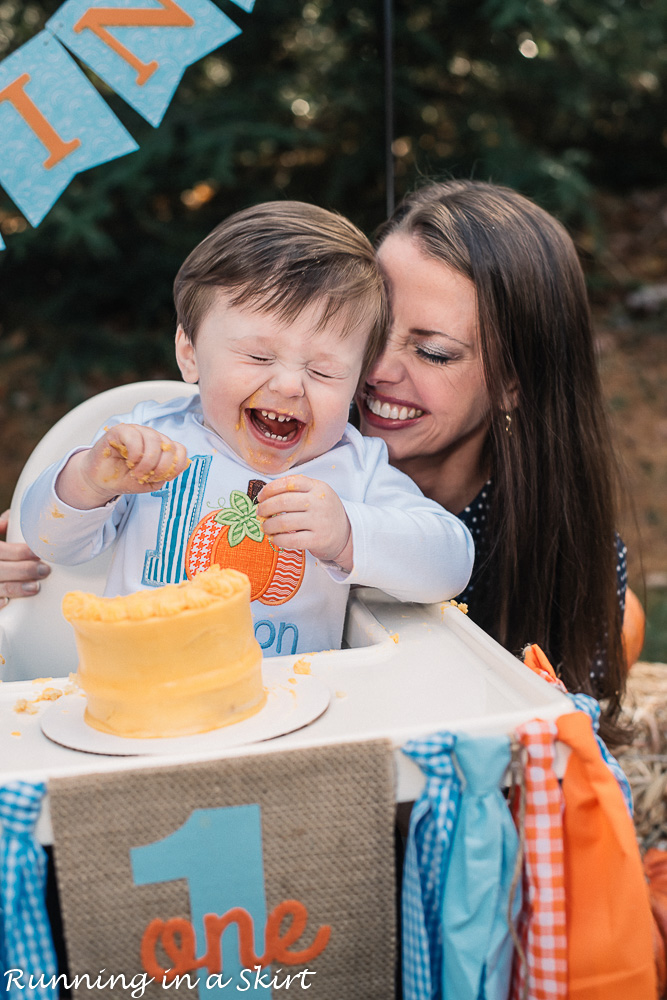 We also had them baptized the same weekend since our family was in town. 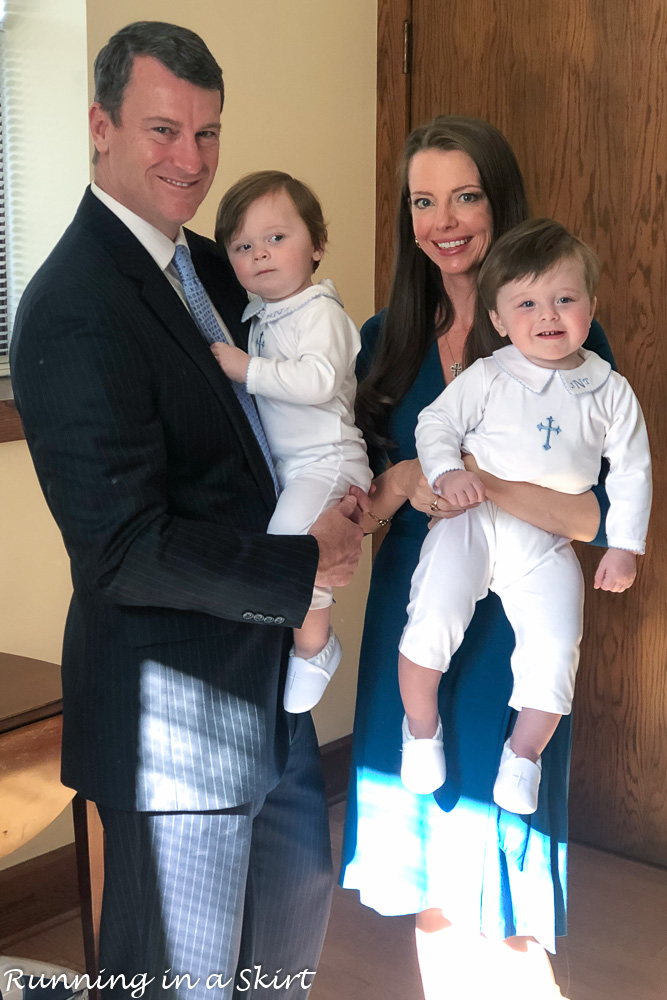 Our whole family got a terrible round of sickness right after the party weekend.  We had strep and the stomach flu in the house which was awful.  The boys had the stomach flu and we had a rough time.

Luckily the boys had these fun new birthday toys to play with!  They are troopers for sure. 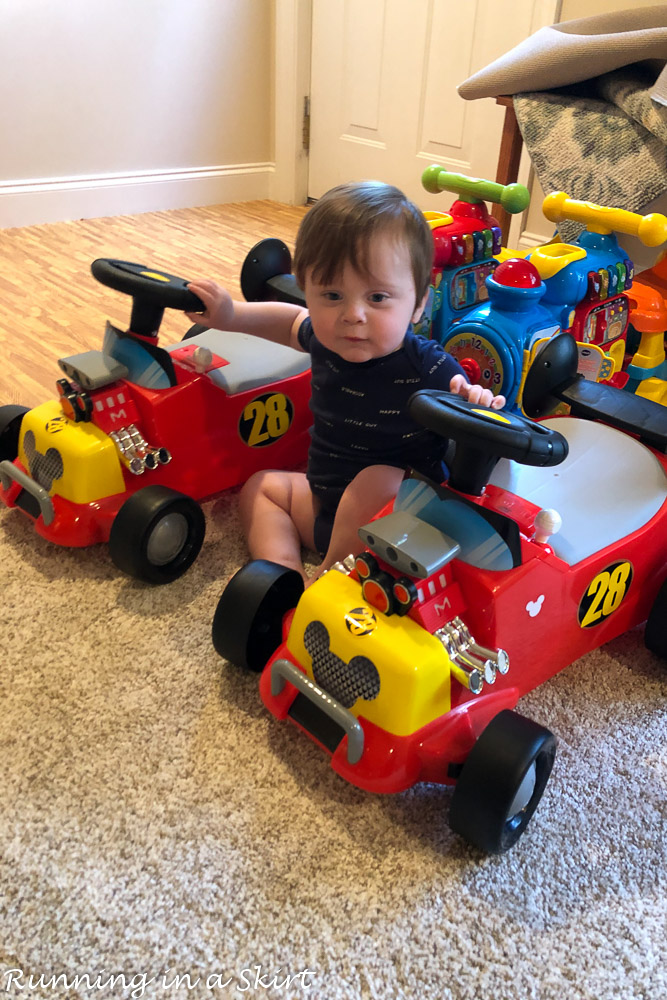 We bounced back a few weeks later and were able to travel to Hilton Head for Thanksgiving with my family. 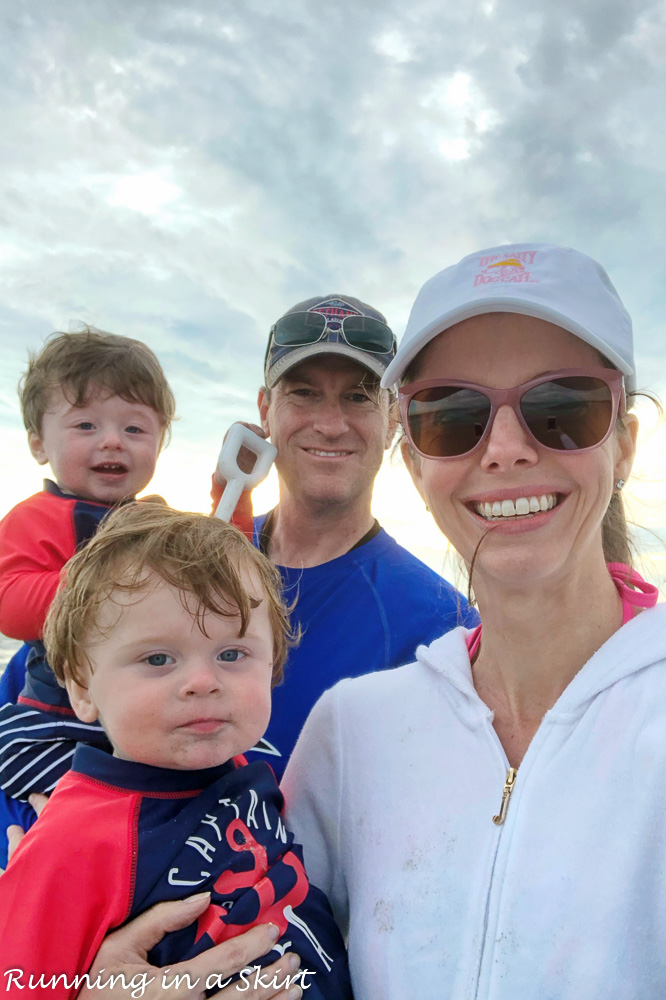 Even though it was a tad cool, the boys loved the beach and had such a great time.

This is the first beach trip where they BOTH could run around and it was so much fun to watch. 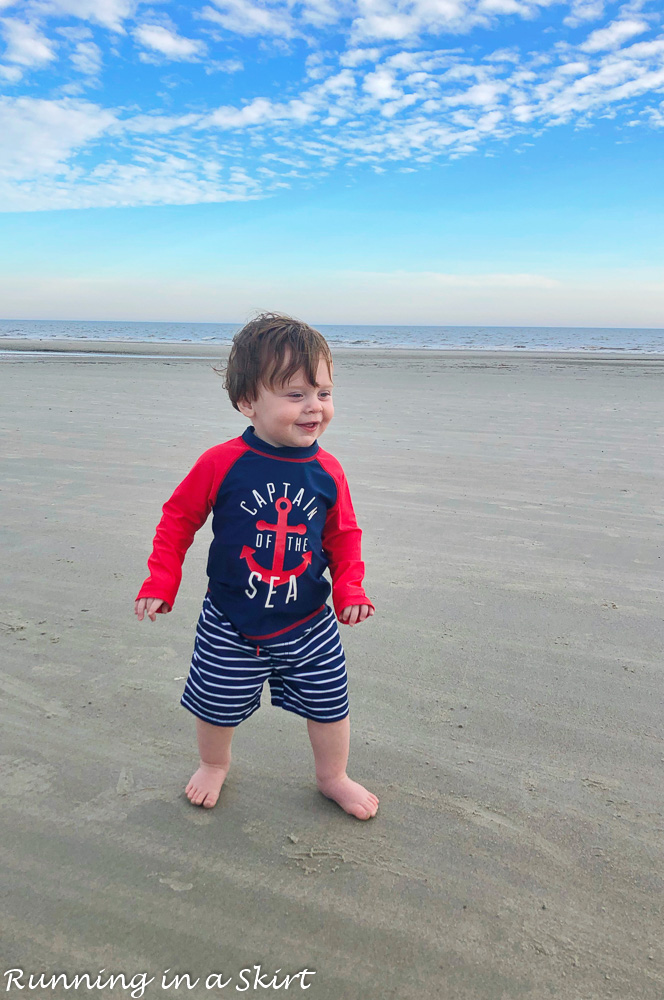 We even did our first family 5K... the Hilton Head Turkey Trot. 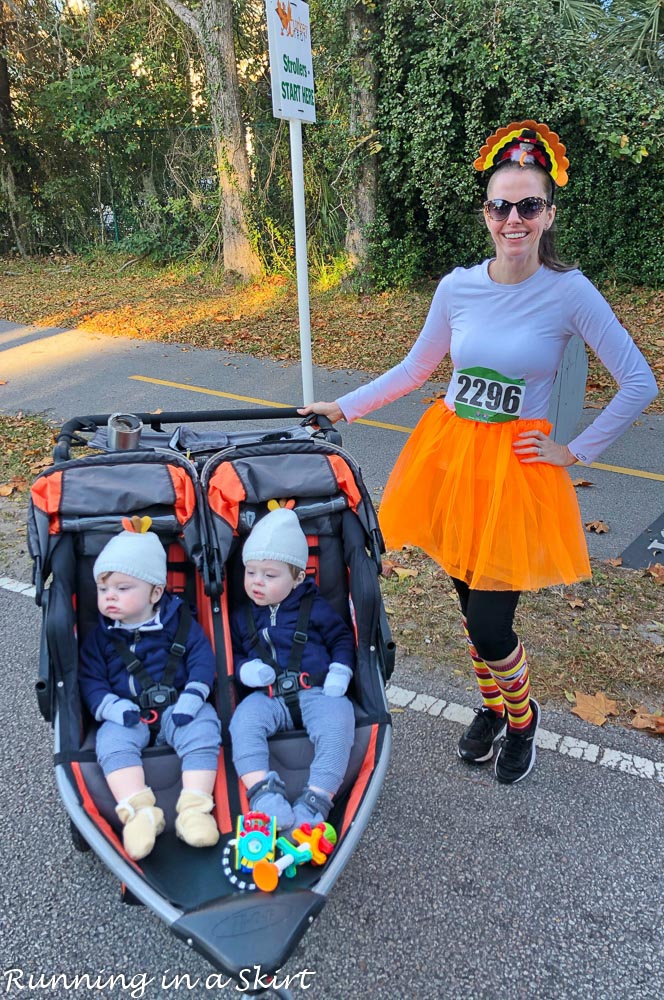 This is one of my favorite pictures of them! 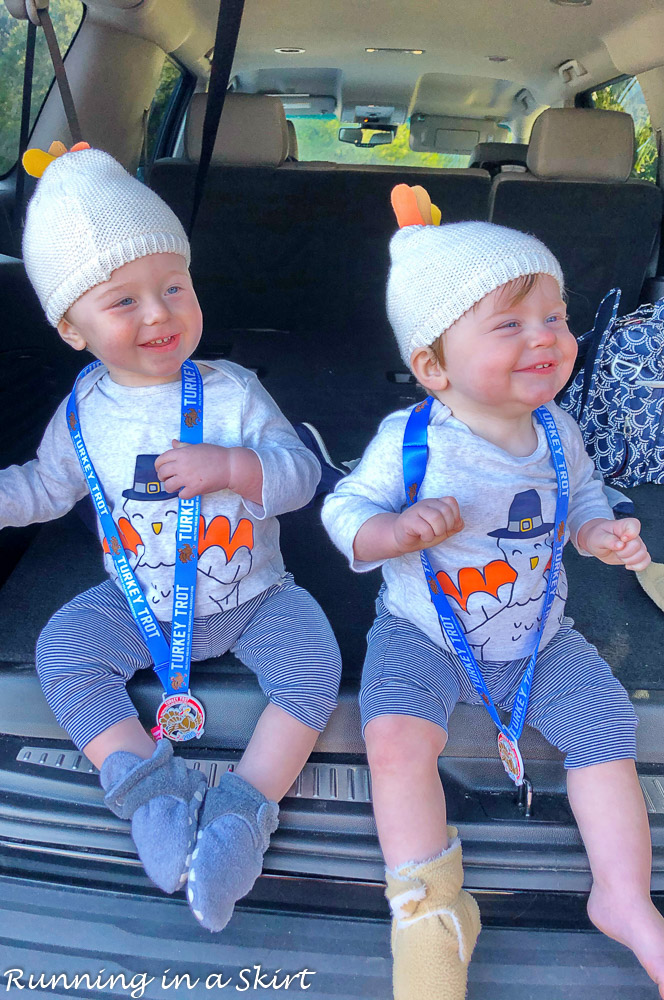 They also got to attend my Dad's wedding to Margaret. 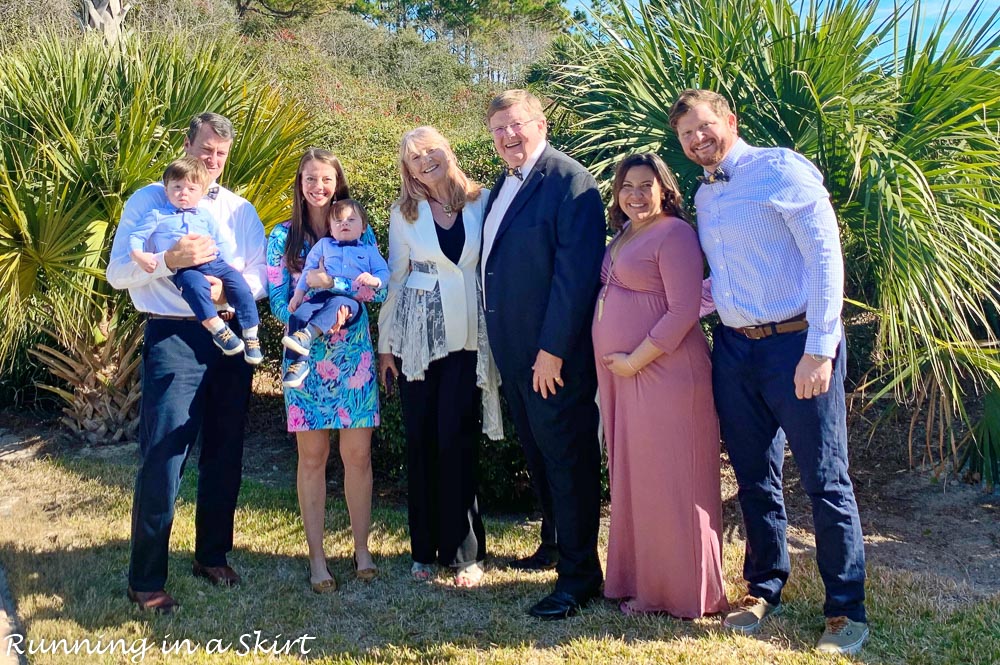 Unfortunately, the boys picked up ANOTHER bug and ended up getting sick on the trip AND making everyone very sick too!  It was another rough time and we barely got everyone home.  The boys were sick for most of their 13th and 14th months.

We hunkered down for a few weeks to make sure everyone was healthy but were able to get in one last Kindermusik class before the end of the year. 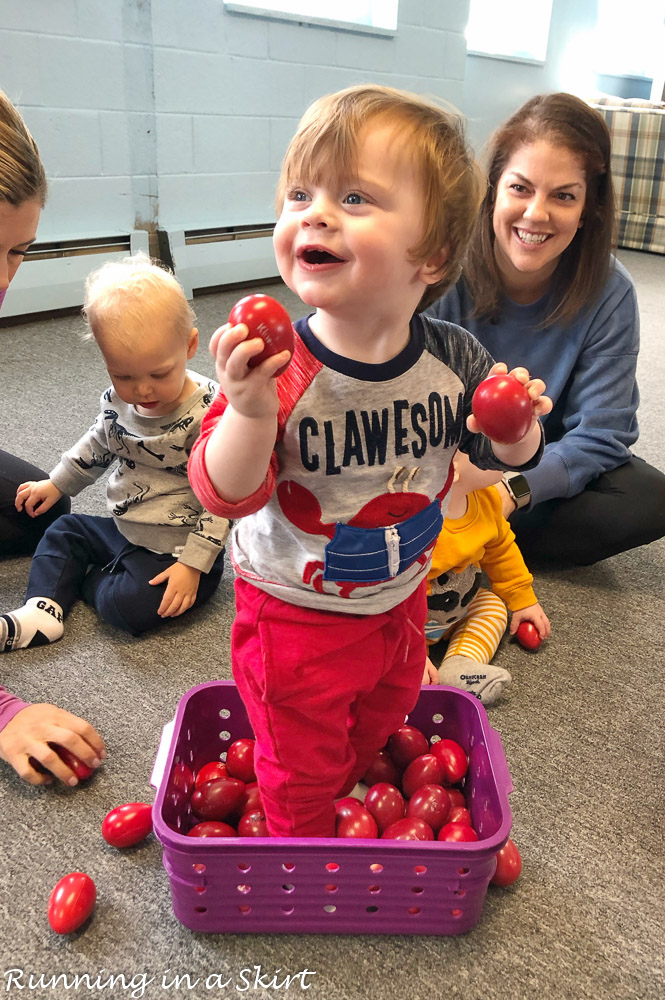 Both Hunter and Jackson loved these classes so much. 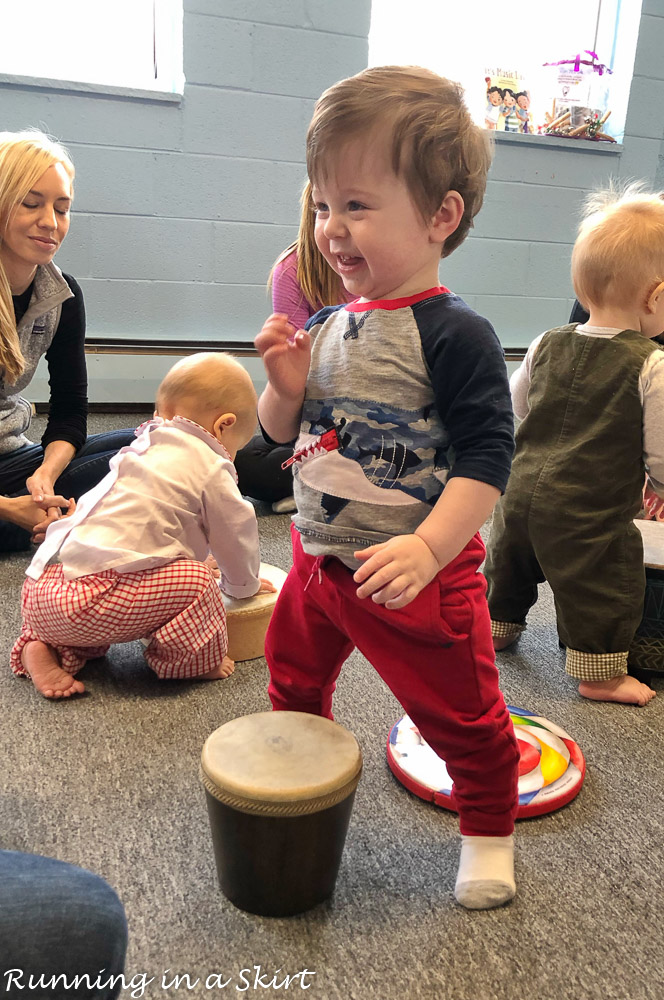 In December we spent a lot of time at home trying not to get sick but we did visit Santa at the Biltmore Estate. 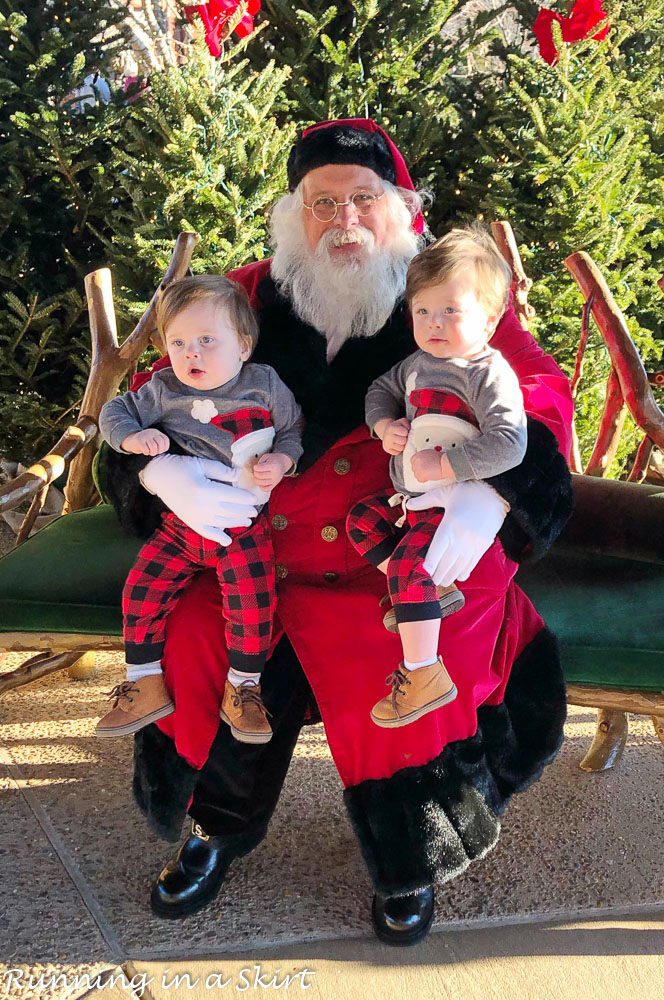 We also got the cutest Christmas card photos made! 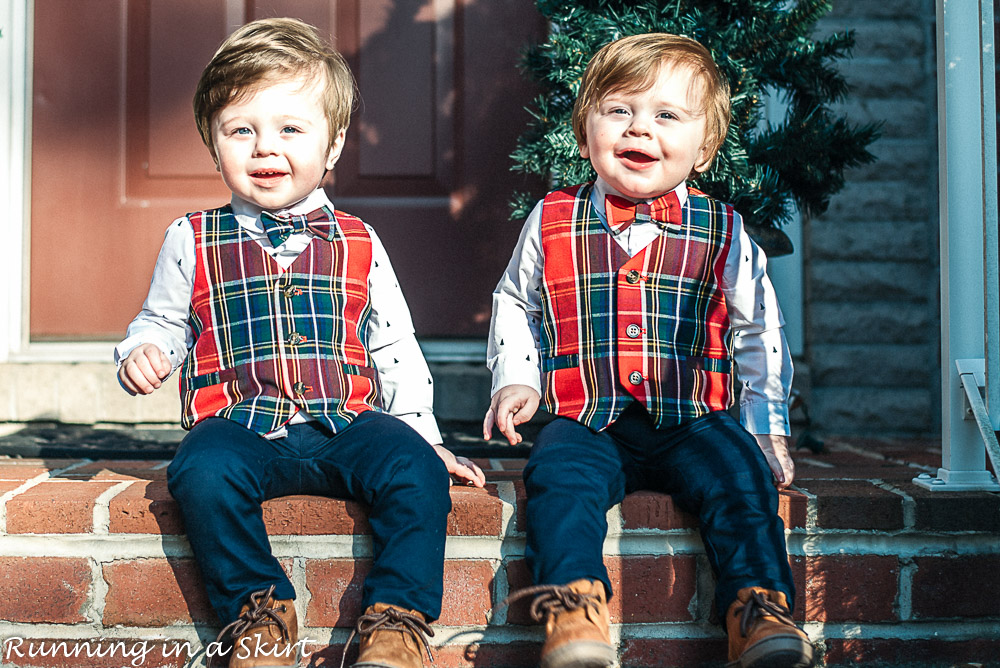 The boy's second Christmas was actually a really lovely day... despite not being able to get that cute family photo. 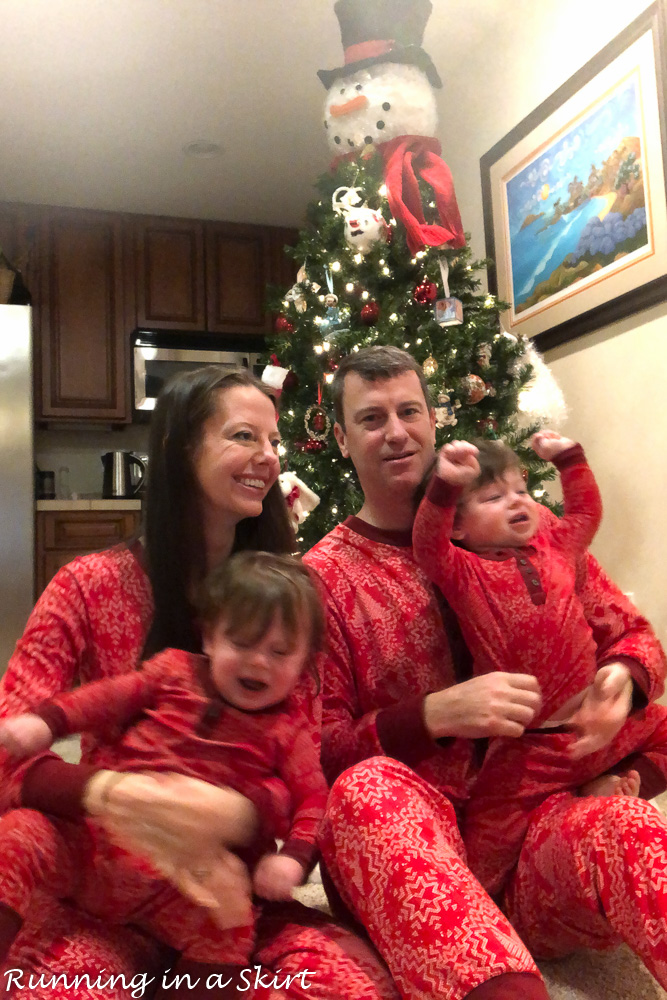 A lot of our family contributed to buy us a swing set in the spring but they LOVED these push cars from their Aunt Danielle. 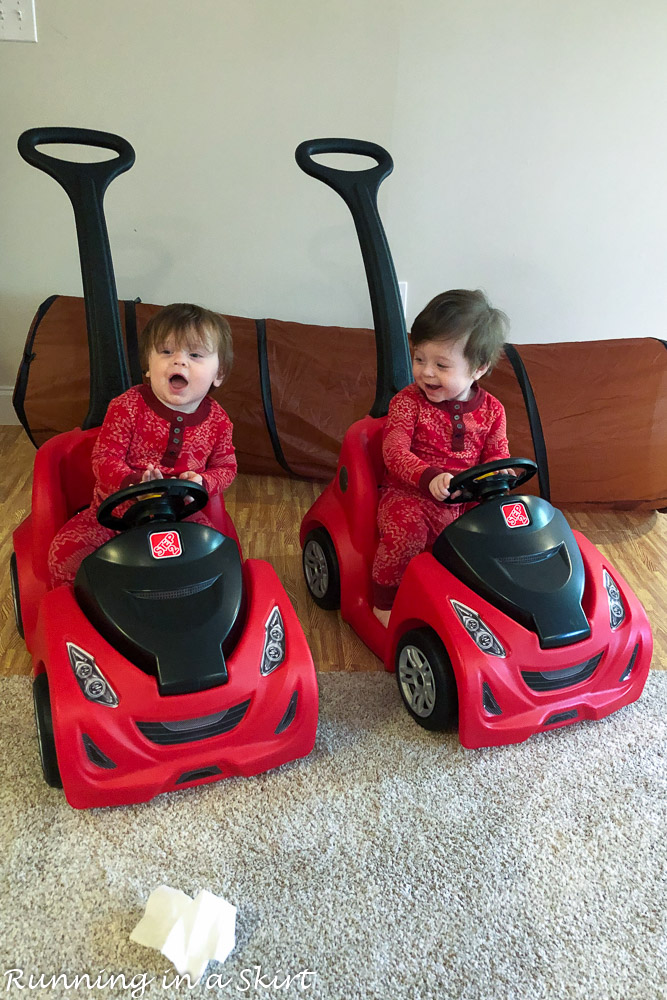 In January we were finally healthy again and went to Florida!  We spent a few days at my childhood home and the boys had fun in this rocking chair which both my Dad, Brother and I used. 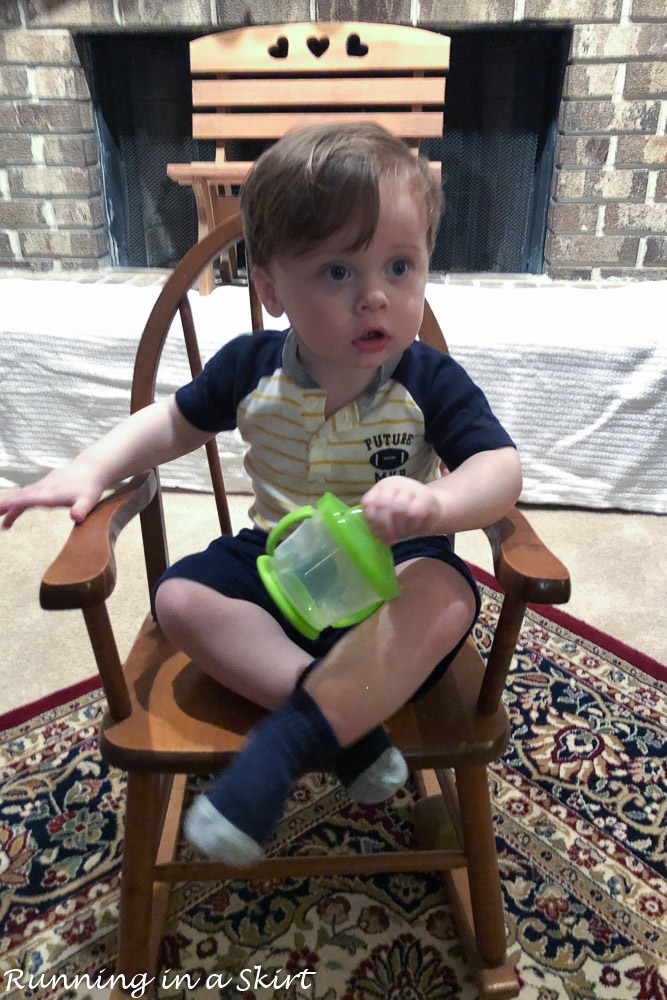 After spending a few days in Orlando we went to Sanibel Island for a week and had a magical time. 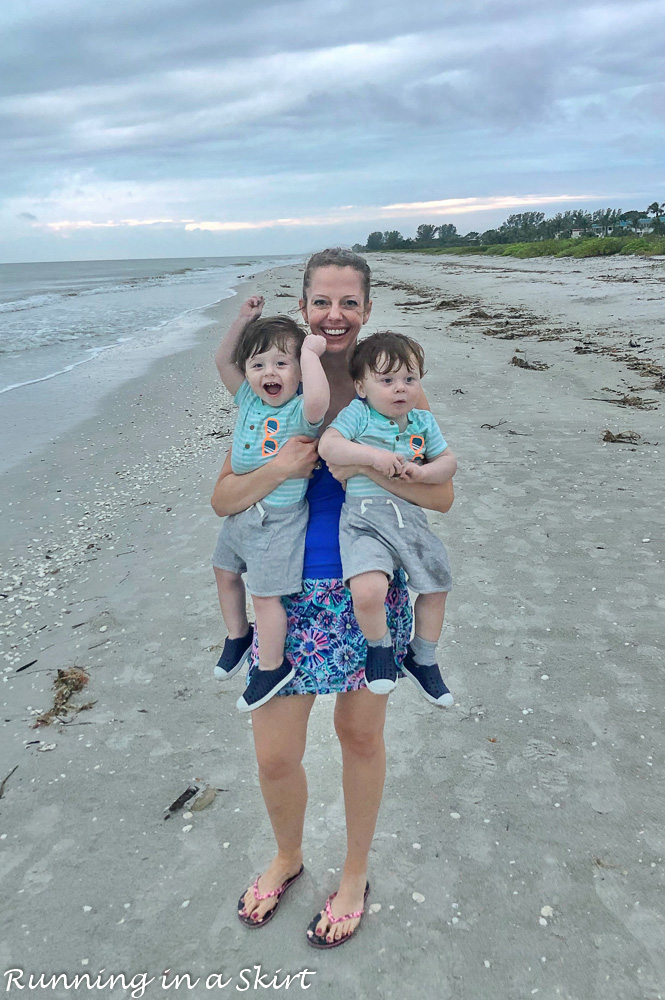 The boys ran in the sand, collected shells and became little beach bums. 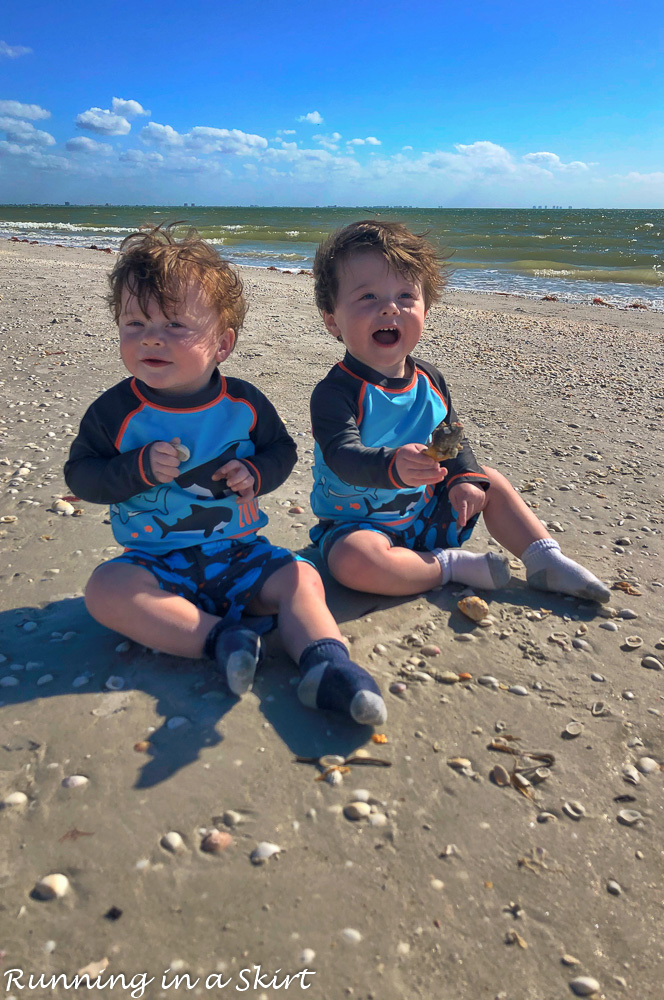 We even took them to see their first sunset. 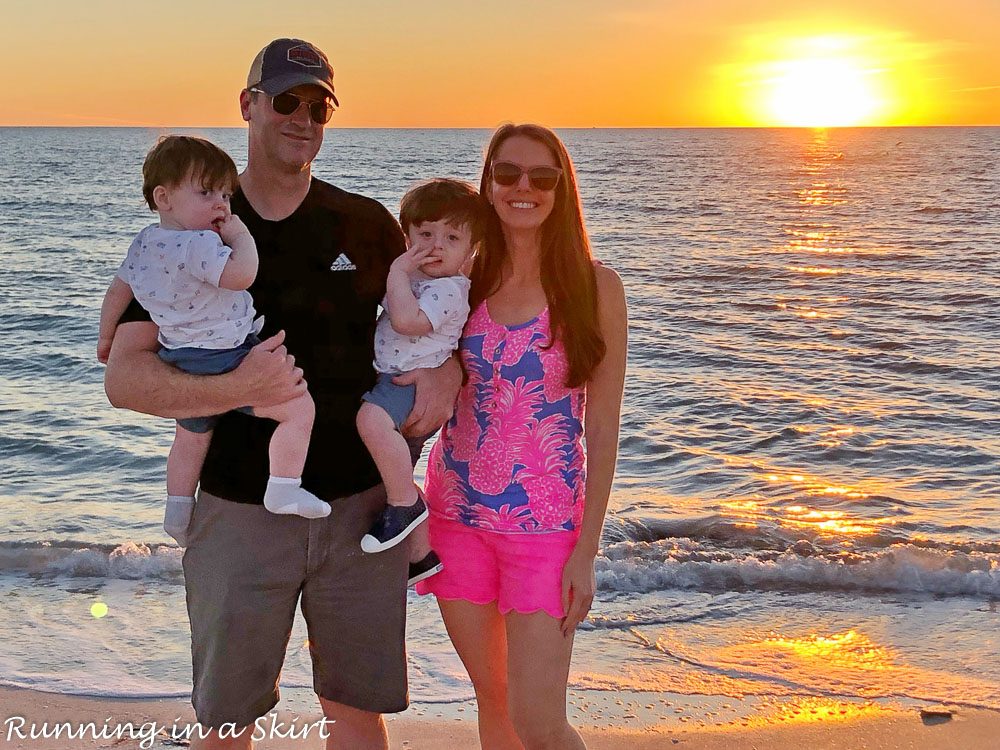 This trip marked their 16th, 17th, and 18th flight on our small plane. 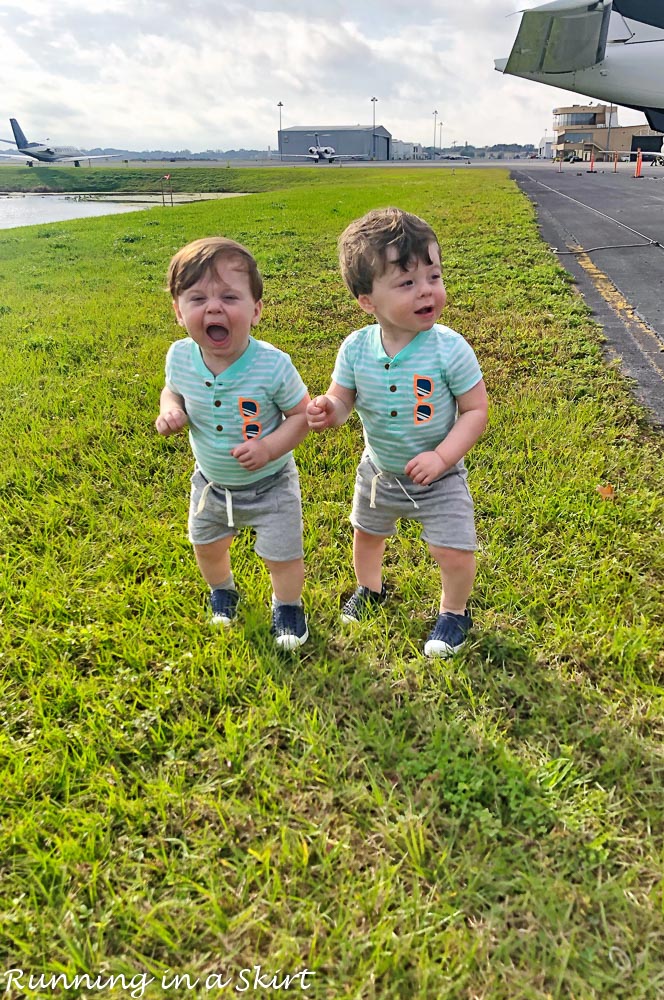 We got back home and settled back into real life, which included grocery store trips. 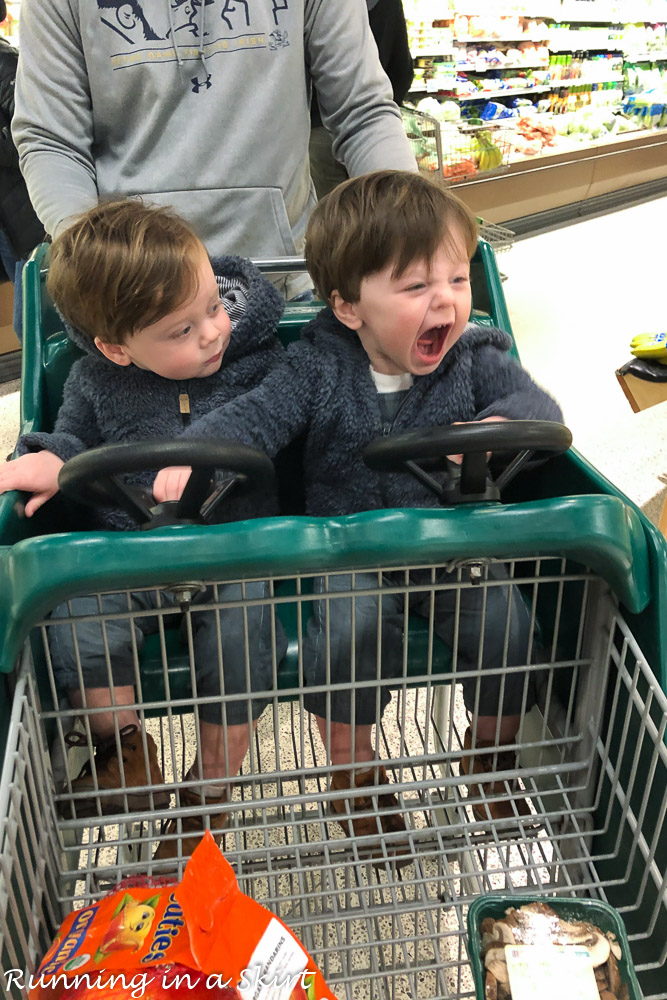 I also started serving the boys more of our meals and they have been loving it!  These blueberry pancakes have been their favorites so far. 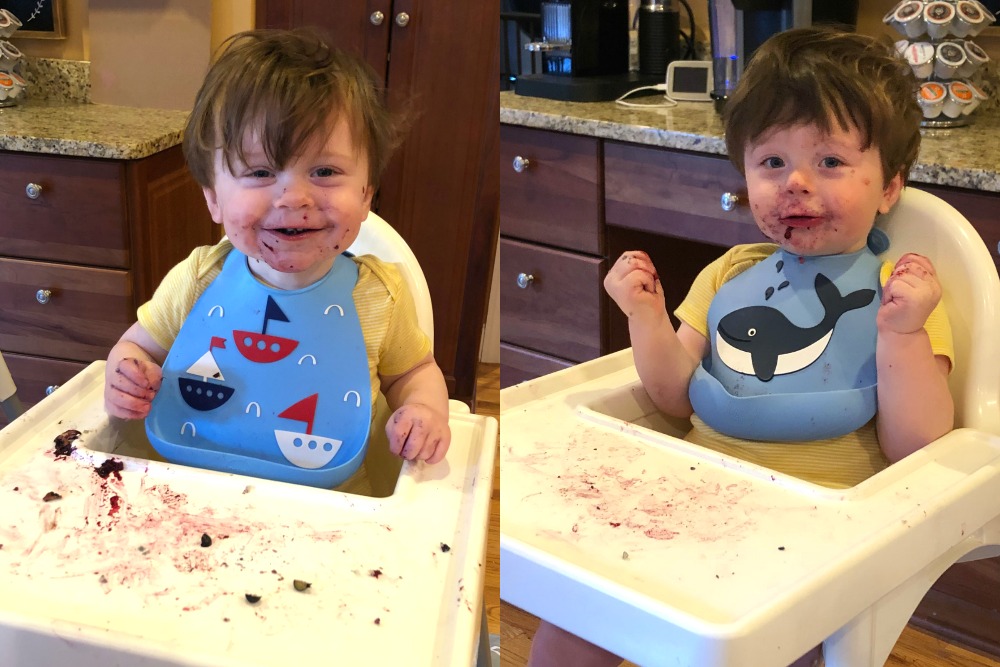 Another favorite has been playing with all the boxes that come in the house!  They are better than some toys! 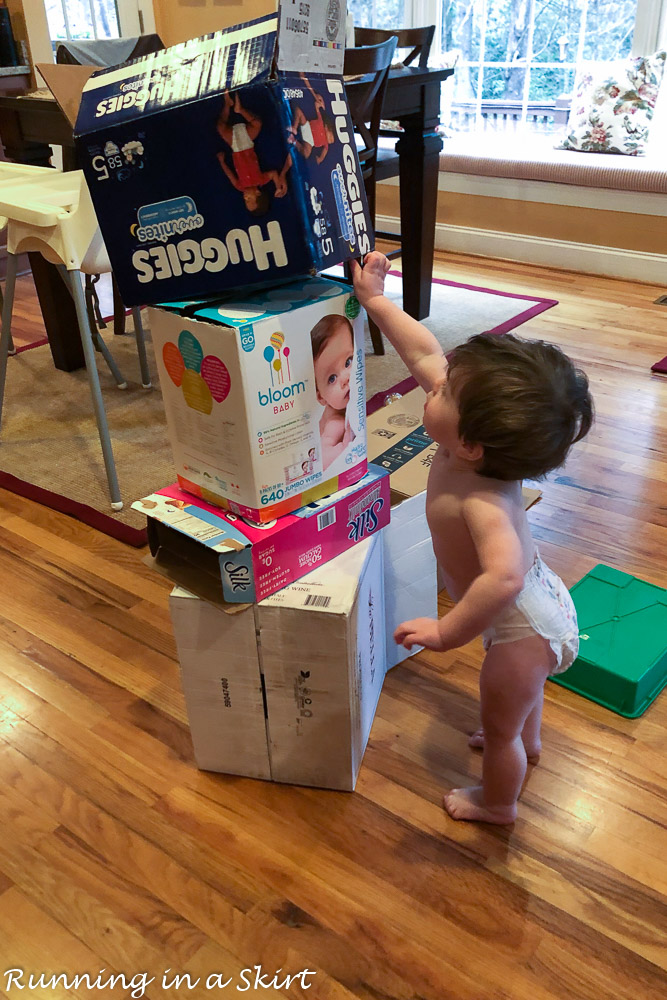 At 15 months the boys very briefly got to go outside in their first snow.  It wasn't much but at least we got the token photo.  It normally snows several times a year but we hadn't gotten decent snow since a couple of weeks after they were born and way too small to take outside. 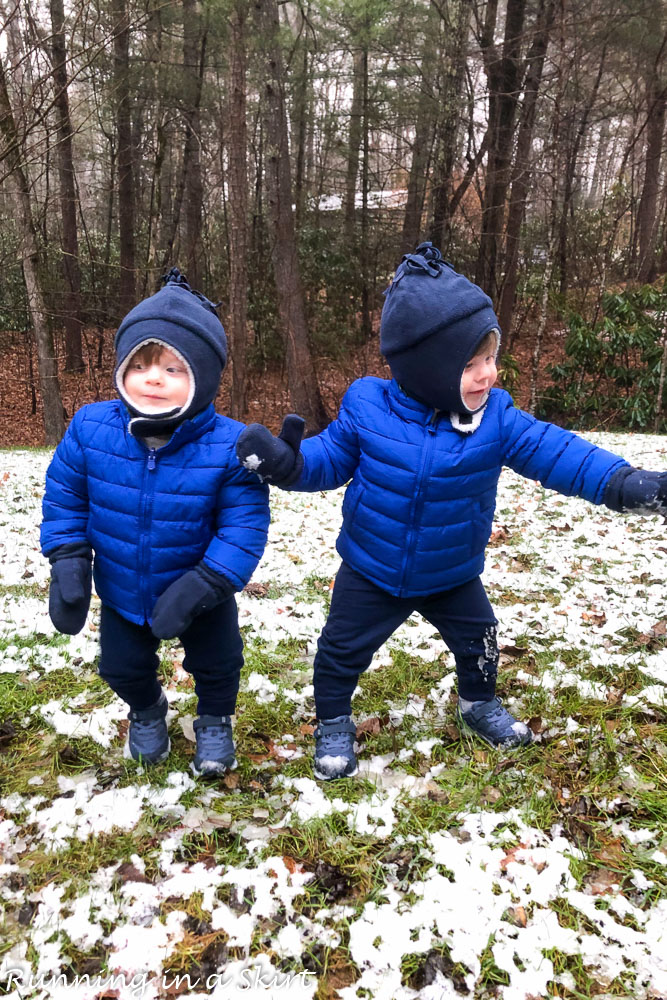 I'm still kind of in shock and awe at the changes and growth.  They are so much BIGGER than they were on their first birthday and they are doing so much more.  They have gotten bolder and have endless energy.  Keeping up with them is an exhausting job as they are constantly trying to find anything and everything that could be destroyed or hurt them.  They get around so well but don't quite understand that there are things that could hurt them yet which is hard.  It's a challenge but I'm learning creative ways to deal with it and hope that they will start to learn soon.

Even though they are undeniably wild and crazy but I wouldn't have it any other way. They are smart, learning quickly and have so much fun.  They make me laugh so much and life around them is never boring!

I know I group them together a lot but I wanted to also share a little more about them both individually.

Jackson is my HAM.  He is almost always laughing and smiling and can light up a room.  When Jackson is happy the world is wonderful. 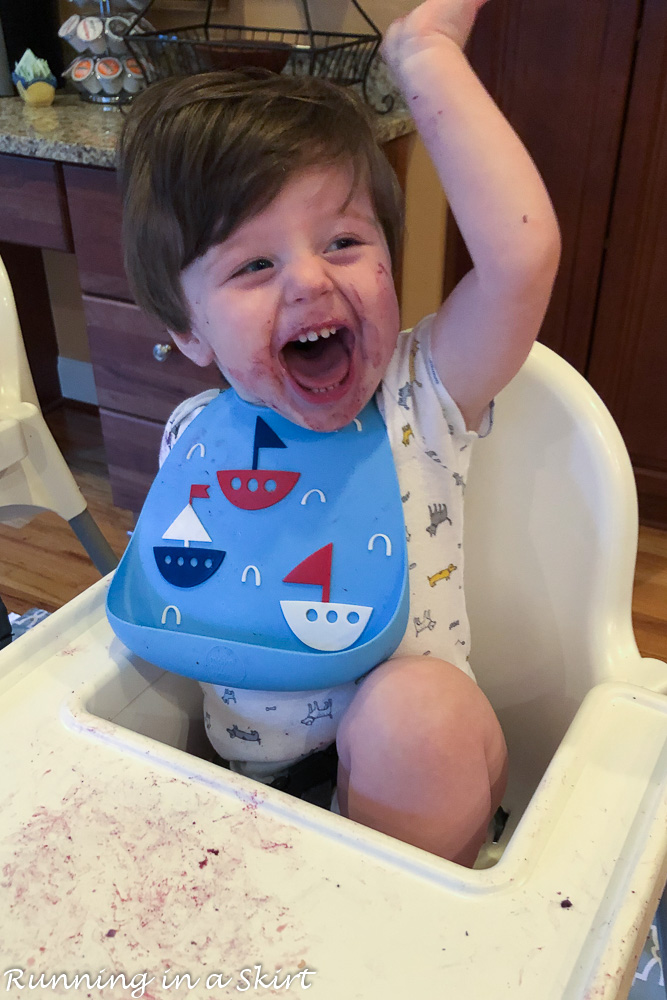 Over the past few months, he has started running everywhere like his brother and is physically very strong.  He is also turning into a chatterbox repeating all sorts of words I say back to me.  He's a sponge and has been learning so much.

Jackson loves push toys, stacking cups and basketball.  He also has this crazy thing about knocking stuff over.  He can also walk up to our toddler basketball hoop and dunk balls when you ask him too.

His favorite foods right now are fruits, eggs, hummus, and quesadillas.  He's a great eater and will try nearly anything I put in front of him. 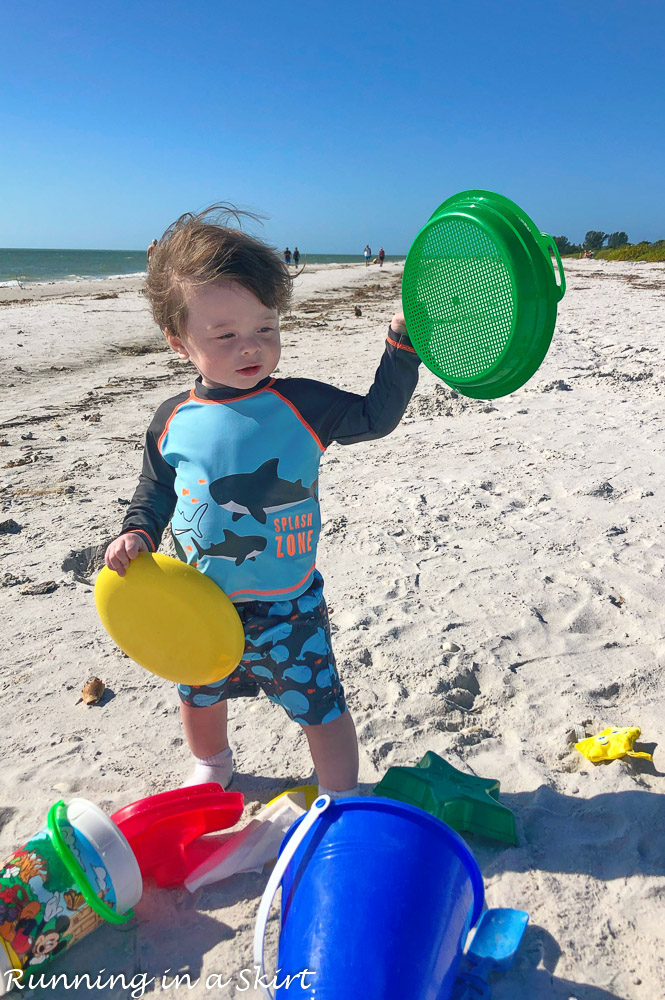 He's a special boy and I'm so glad he's mine.

Jackson is has taken off!  He's over 34 inches and weighs nearly 28 pounds.  He feels so heavy I swear he gets heavier daily.  He's off the charts on height and in the 85th percentile for weight.  He is quickly outgrowing his 18-month clothes and everything I"m buying for spring and summer is 24 months.

Hunter is my strong AND sensitive baby.  He's still physically super strong and runs everywhere but he also loves to be held and cuddle with me on the floor.  He's also super interested in books and will bring them to me to read AND sit through the entire thing.  He will melt your heart into a million pieces with his generous hugs. 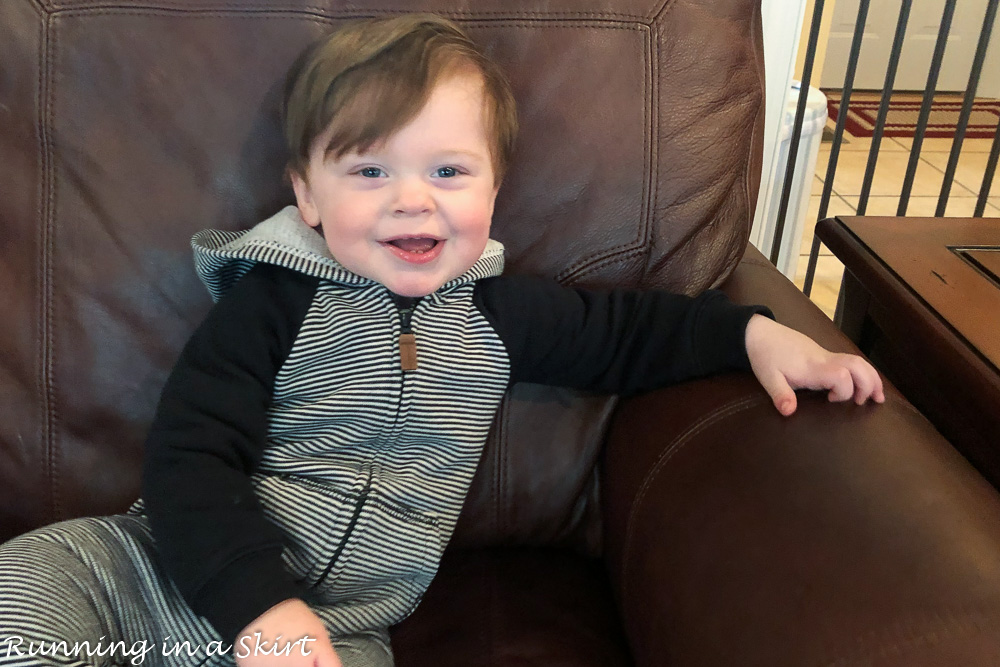 He's also funny and super interested in new things.  He makes the cutest "OHHH" face when he sees something he loves like this beach shovel. 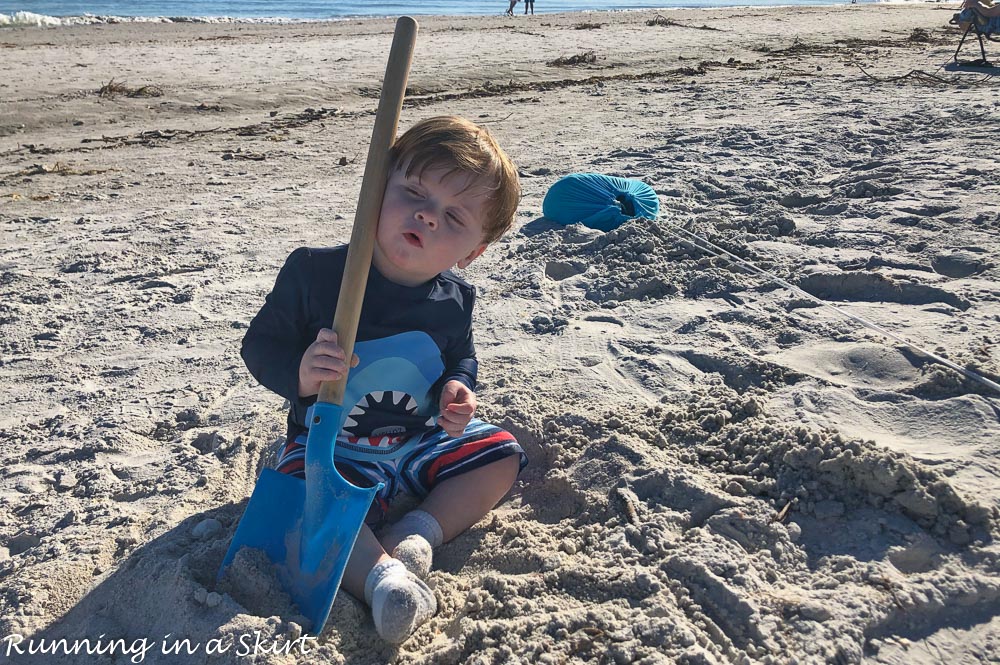 He is a slightly slower talker than his brother but has also been picking up all sorts of new words in the past few weeks.  Hunter loves books, soft stuffed animals, riding cars and sliding.  He's also quite a climber.

Hunter's favorite food by far is all fruit but especially berries.  I think he would eat an entire carton if I let him.  He also loves eggs, hummus, and quesadillas.  He isn't quite as adventurous as an eater as his brother and it will sometimes take giving him something a few times before he decides he likes it... but he usually ends up liking whatever I give him eventually.

Hunter is still very tall and big... although not quite as tall as Jackson.  He was 33 inches and 27 pounds at our last appointment. He is quickly outgrowing his 18-month clothes and everything I"m buying for spring and summer is 24 months.

Since their first birthday, we've been working towards getting rid of their bottles and giving them snacks and sippy cups instead.  It was a slow process but we now only have an evening bottle remaining and plan on figuring out how to get rid of that in the next few weeks.  We are also still taking two naps a day but Jackson has been fighting that.  Hunter still needs to need/want it so it's been hard to figure out how to handle that.  I selfishly would like to keep the first nap around as long as possible. 🙂

On a side note, I had mentioned my fears that the boys had a milk allergy and after slowly testing them they don't!

It's so cliche, but time with my cuties is really flying.  I miss them being babies but I am LOVING the sweet toddlers they are turning into.  I'm starting to see some signs of tantrums and such but I'm trying to take it all with a grain of salt. I've learned about the only way to stay sane raising twins is taking it one day... sometimes one hour... at a time.  So that's how we'll have to handle this next stage too.

The next update will be around 18 months and I can't imagine how much they will change between now and then!