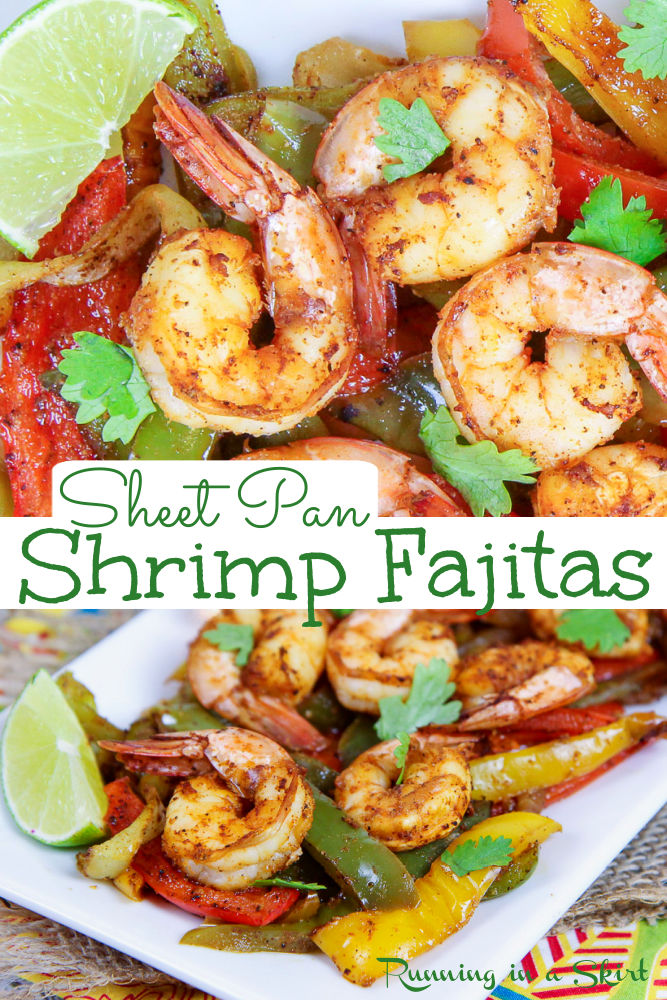 My Sheet Pan Shrimp Fajitas recipe is the perfect simple and healthy meal the whole family will love.  This easy Mexican dinner oven bakes juicy shrimp, savory bell peppers, and onion with the perfect Mexican Spice Mix.  Serve with your favorite fajitas toppings for a no clean up meal that rivals your favorite Mexican restaurant. 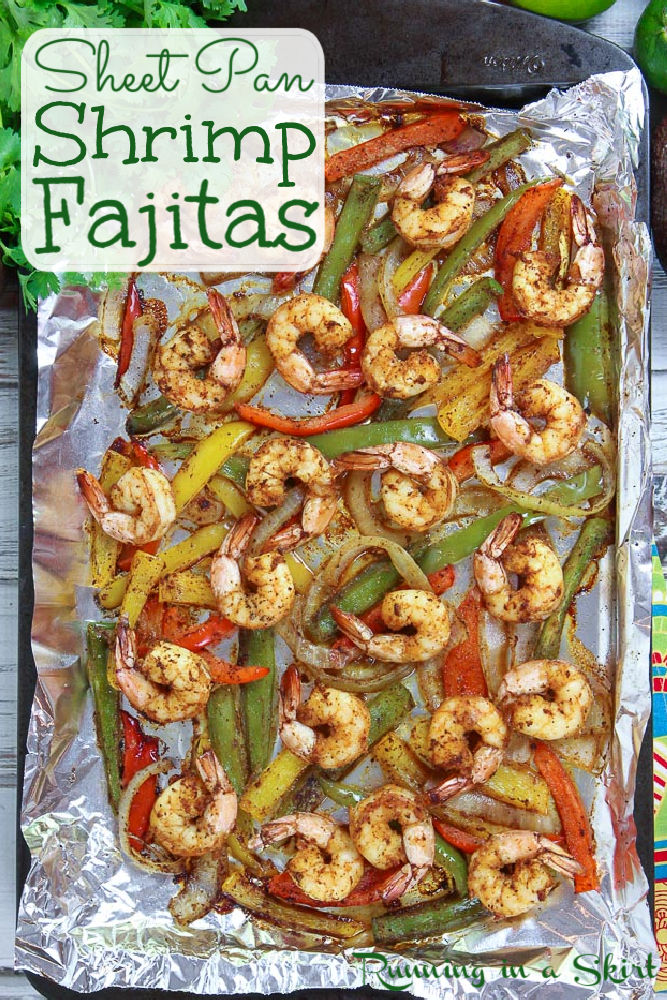 Sheet Pan Shrimp Fajitas are literally one of the easiest dinners you can make.  This simple recipe has no cleanup and tastes amazing, especially considering it comes together with a handful of ingredients in just 20 minutes and is made on a foil-lined baking sheet.  It's perfect when you need a fast dinner on weeknights.  The stars of this Mexican meal at home are tender shrimp and the perfect savory blend of bell peppers and onion... just like that sizzling pan you get at your favorite Mexican restaurant.  The key is my special homemade Mexican Spice Mix, which has all those tasty and familiar flavors.

The best part about my fajitas is that, unlike your favorite Mexican restaurant, my version isn't laced with a bunch of oil and fat.  It's much healthier!

You can also control the type of toppings and tortillas you use making this recipe customizable to almost any diet including pescatarian, gluten-free, keto, low carb, and even low calorie.  If you are gluten-free just pick gluten-free tortillas and you are good to go!  Dairy free? Leave off the cheese and sour cream!  This is a great recipe if you have family members on a different diet because everyone can assemble their fajitas in their own preferred way. 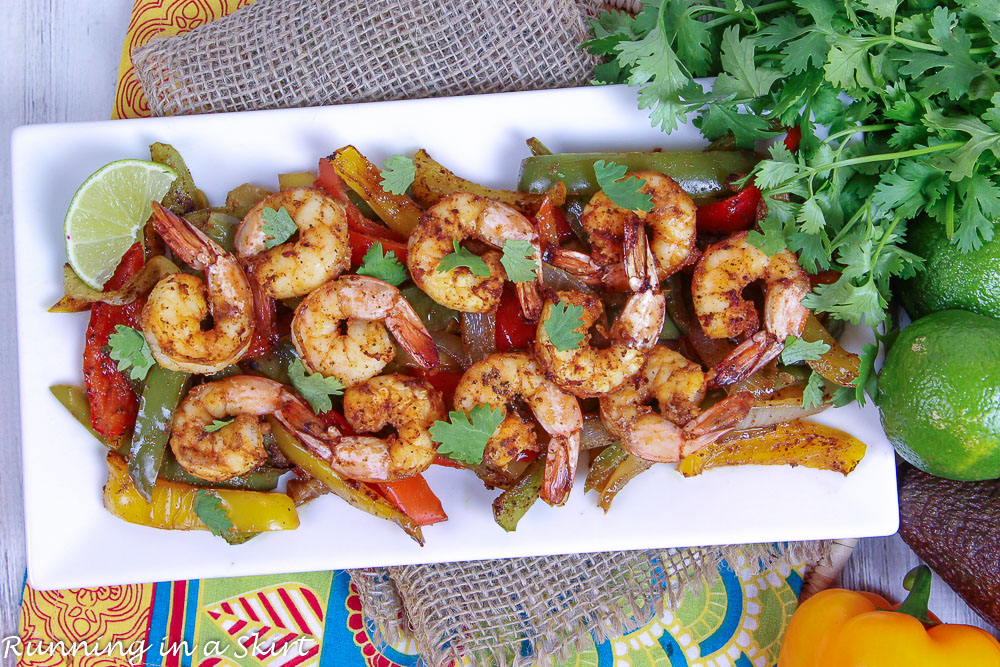 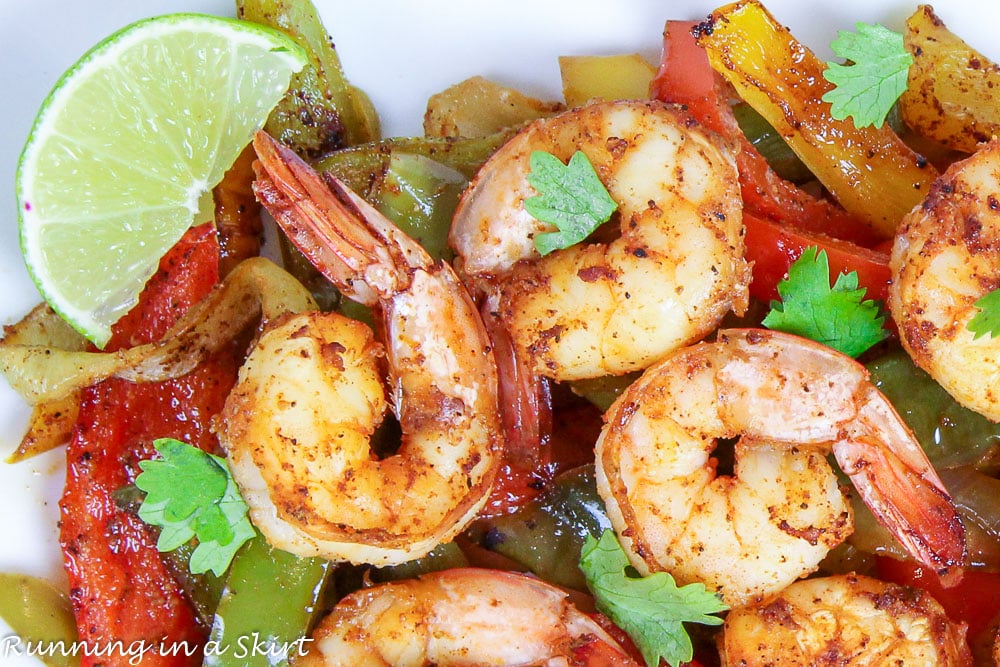 This is an overview of my Sheet Pan Shrimp Fajitas, keep scrolling for the full printable recipe with amounts and exact details.

How to Know When Shrimp is Done Cooking:

Shrimp can overcook very quickly, so it's important to keep an eye on them while they are in the oven.  Shrimp cooking in a hot oven will only take a few minutes to cook.  I'd start checking them at 4-5 minutes but they may take up to 7 or 8 depending on your oven and the exact size of the shrimp.  They are done when they turn opaque and just start to curl.

How to Serve Shrimp Fajitas 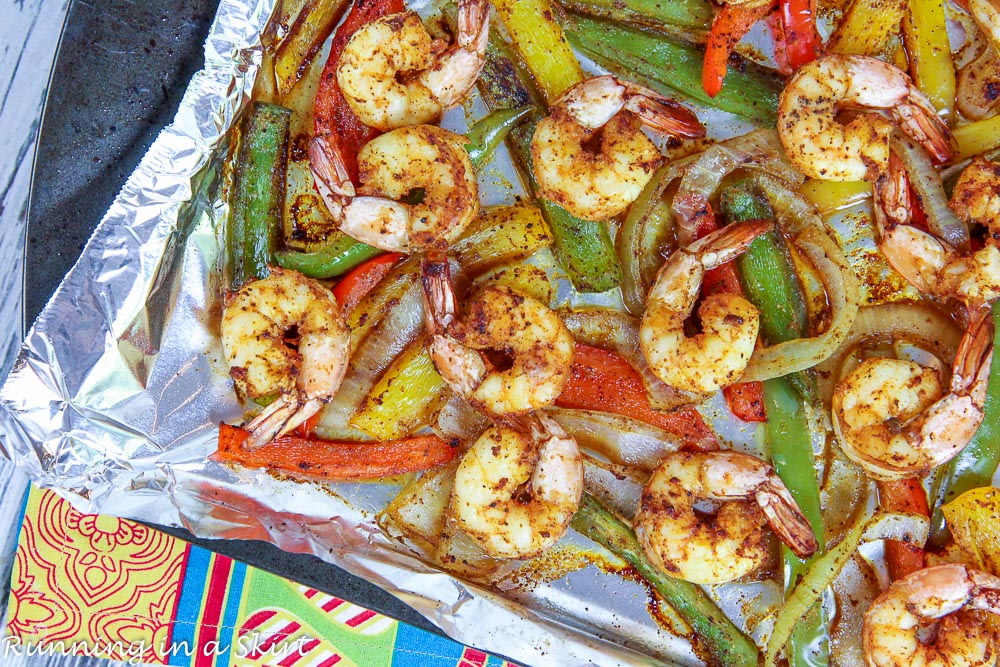 Can I make these ahead of time?

How do I store leftovers?

Store leftovers in an airtight container in the refrigerator for up to three days.

Can I make these in a skillet?

Yes!  Use a large non-stick skillet.  Cook the peppers and onions over medium-high heat until cooked.  Remove the peppers from the pan.  Add the shrimp and cook for 3-5 minutes until done.  Toss everything together and serve. 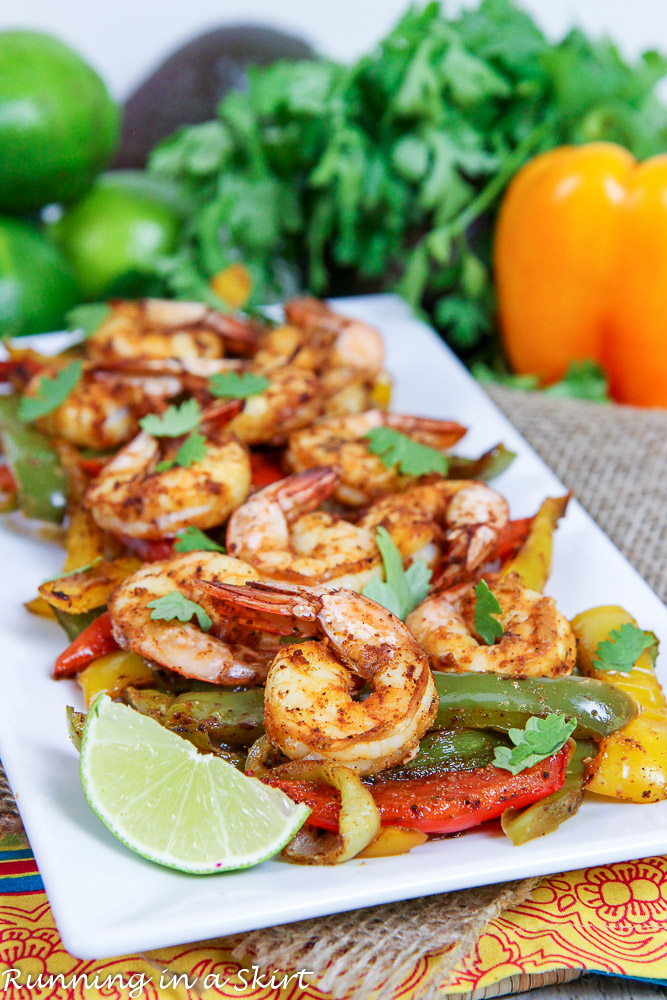 If you are serving these Sheet Pan Shrimp Fajitas like traditional fajitas, here are some of my favorite ideas for toppings. 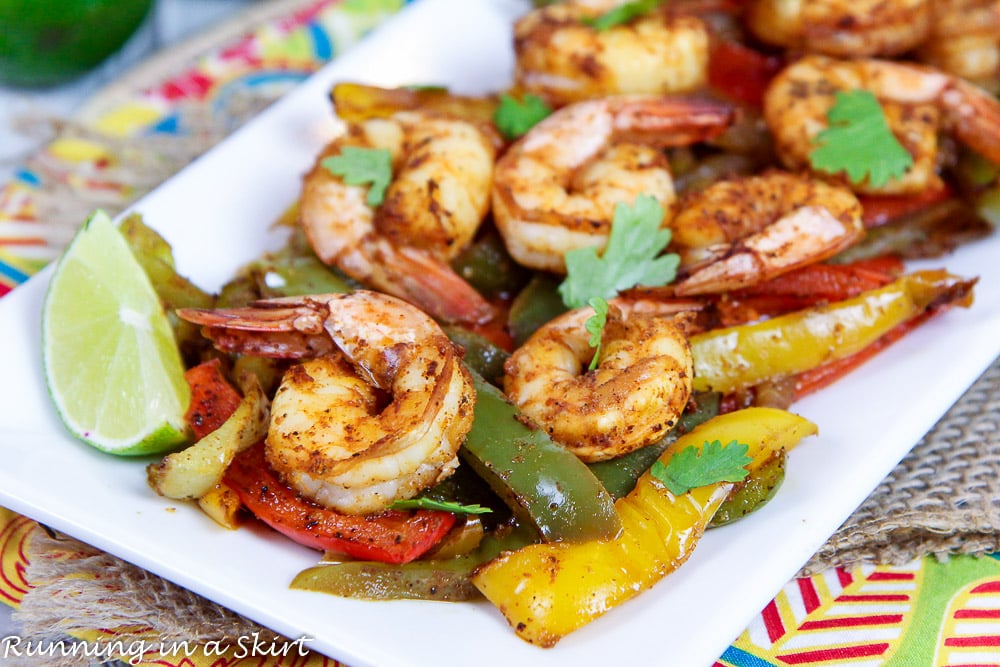 Sheet Pan Shrimp Fajitas are the perfect family meal.  There are SO many reasons to love this dinner including that it's fast, healthy, and simple and everyone can tweak it to their own taste and diet.

Serve my easy Sheet Pan Shrimp Fajitas recipe with your favorite fajitas toppings like cheese, Greek yogurt, lime, or cilantro.  I like to pile mine up on a whole wheat tortilla.  If you aren't eating carbs this would also be delicious over a bowl of cauliflower rice mixed with lime and cilantro.  Any way you serve it this Fajitas recipe is a family favorite!

Make it a Meal:

Here are a few side dishes to serve with these shrimp fajitas.

How to Serve: Store any leftovers in an airtight container in the fridge for up to 3 days.