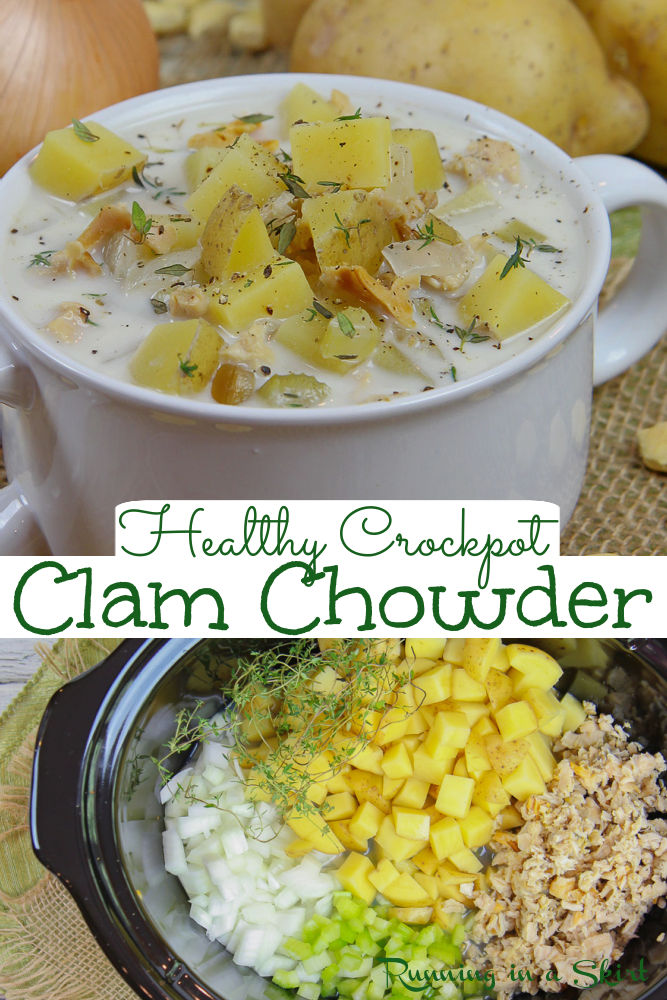 This Crockpot Clam Chowder recipe is super easy to make in your favorite slow cooker.  This rich and flavorful comfort food soup is packed with canned clams, clam juice, golden potatoes, and a creamy white broth.  My version uses some simple healthy swaps so it is lighter and healthier with no canned soup! 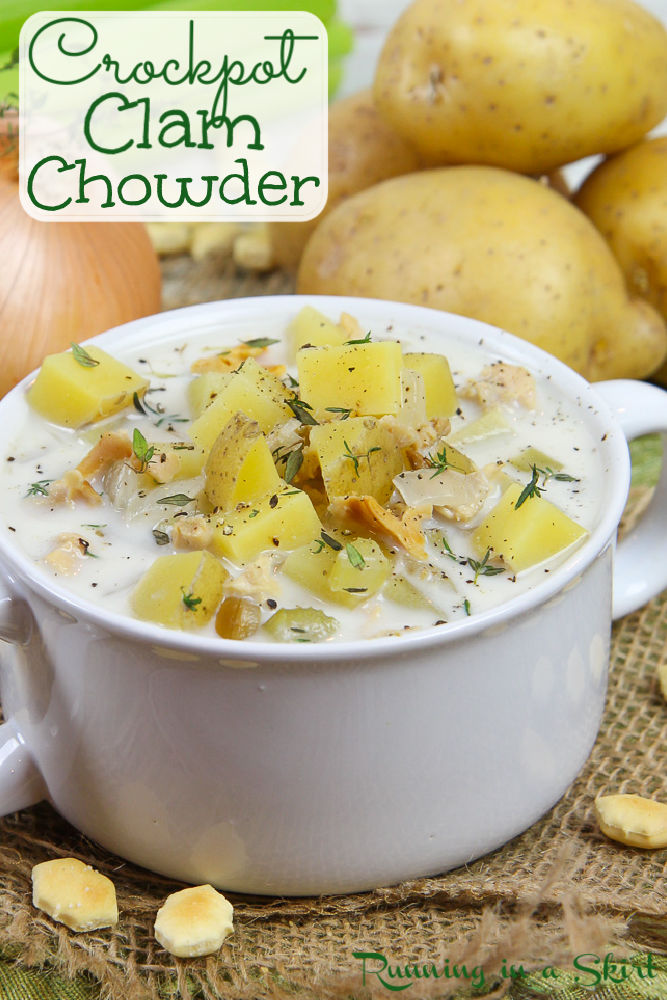 This Crockpot Clam Chowder recipe is everything you are looking for in an easy weekday dinner.  It's warm, cozy, super flavorful yet is crazy easy to make in your favorite slow cooker.  Your family will think you fussed over the stove with this soup for hours, instead of doing just 10 minutes of prep work for a rich and creamy soup that will rival your favorite restaurant.

It's probably no surprise that with my love of seafood, I have a soft spot for Clam Chowder at a restaurant.  I enjoy it out, but my home-cooked version is of course lightened up and a bit healthier.  I use no bacon or pork, making this recipe pescatarian friendly plus it's a bit lighter without heavy cream.

My Slow Cooker Clam Chowder is New England style and so delish.  Even with my healthy swaps, the rich flavor of this creamy chowder will have everyone asking for another serving. 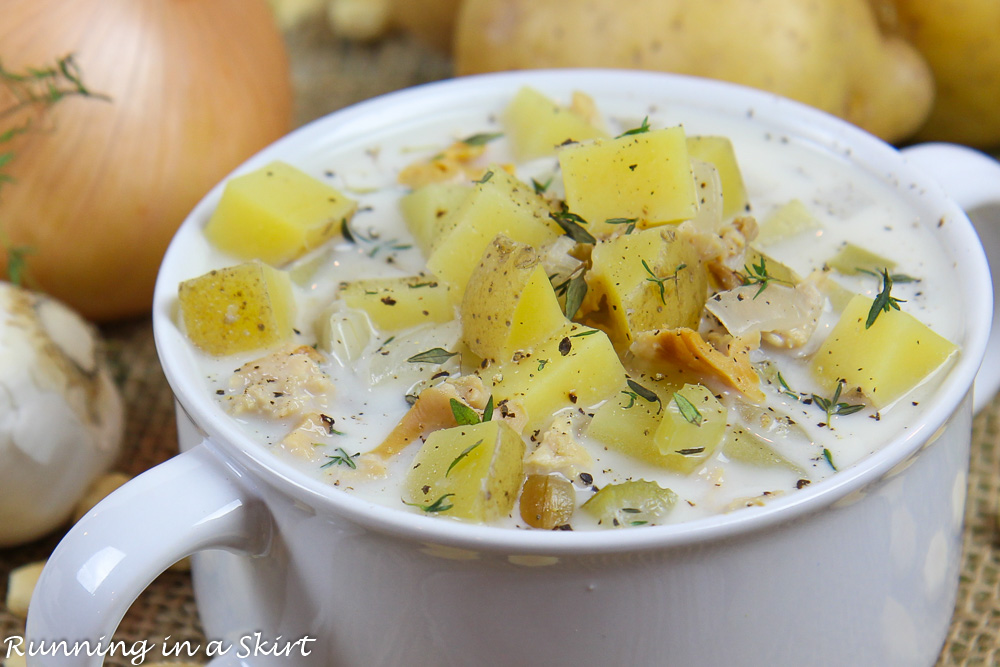 Manhattan Clam Chowder has a very different red broth from more of a tomato soup base.  It almost always has tomatoes and is often referred to as Manhattan Red Chowder

This recipe is considered a New England or Boston Clam Chowder.  It is made without any pork though making it a pescatarian-friendly version. 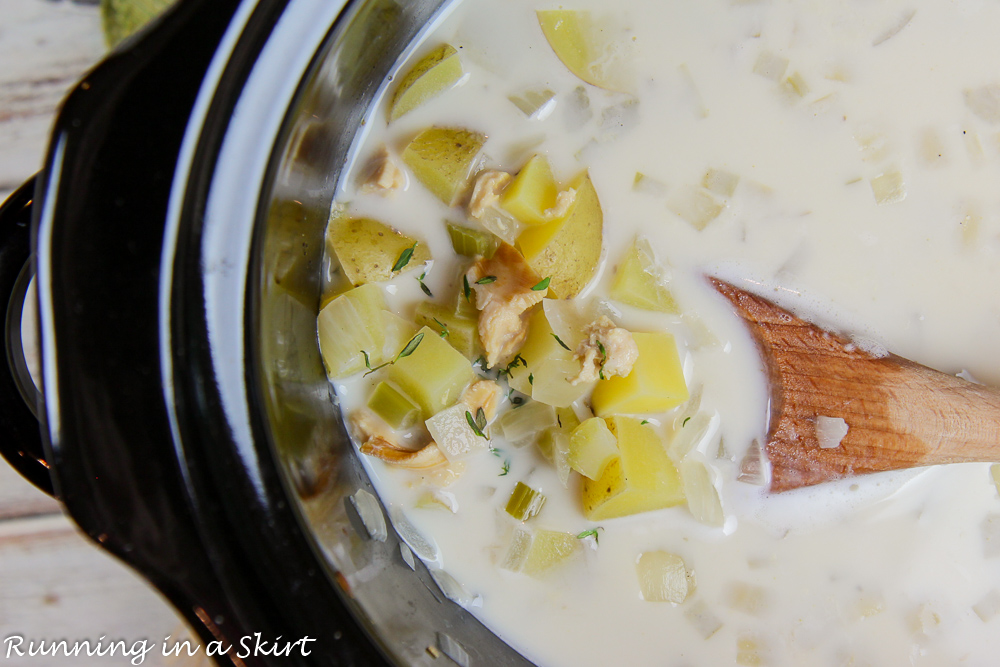 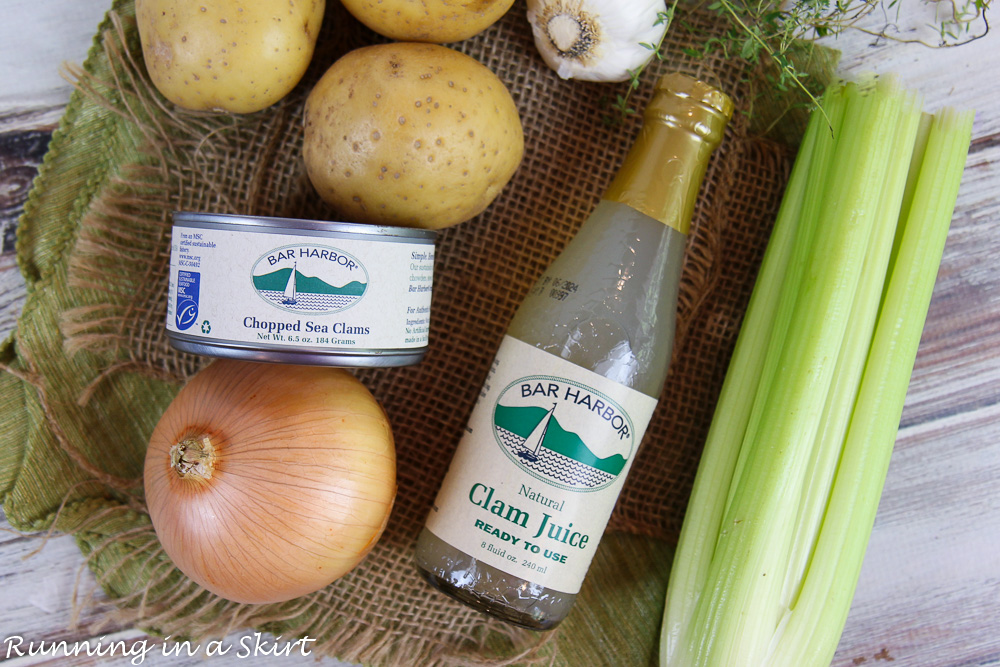 It's easy to make Crockpot Clam Chowder! Here's what you do.

How can I thicken clam chowder?

I thicken this clam chowder by using a combination of milk and corn starch.  The cornstarch thickens the soup.  You can also make a roux on the stove with flour, butter, and milk or use pre-made thick canned soup like cream of potato soup. 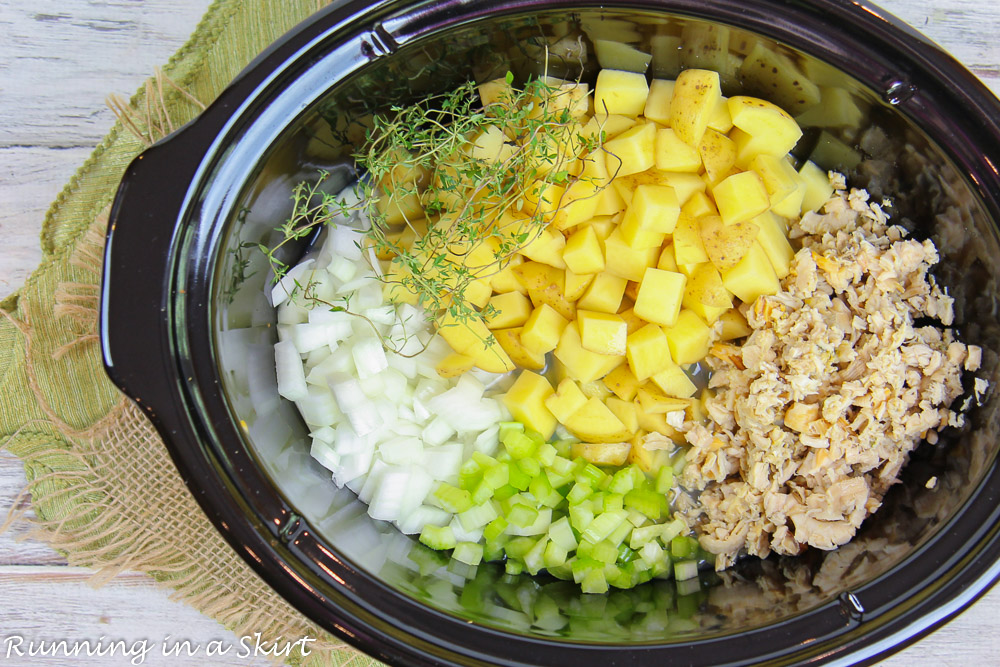 I love this Crockpot Clam Chowder as written, but here are some fun ways to mix it up.

How do you store leftovers?

Store any leftovers in an airtight container in the fridge for up to 5 days.

How do I reheat the clam chowder?

You can reheat the Crockpot Clam Chowder in the microwave.  Cover it and heat it for 30 seconds at a time until it's warm enough for your taste.  You can also reheat it on the stovetop by putting it in a saucepan over medium heat and warming it up.

Can you freeze clam chowder?

Yes!  Clam Chowder actually freezes very well.  You can either freeze the entire batch in a freezer-safe container or separate it into individual portions.  To thaw it out set it in the fridge overnight and then follow the reheating instructions above.

Can I double this recipe?

Yes, you just need to have a BIG slow cooker to do it.

Can I use fresh clams?

Yes, you can! While I think canned clams work great for this recipe you can use fresh ones.  To prepare them, soak them in a pot of cold water with cornmeal in it.  Let them soak for about 30 minutes and they should spot the clams.  If your clams are larger chop them into smaller pieces and add them to the soup.  You'll also need to add some extra clam juice because the canned clams have some extra built in.

Can I make this in the Instant Pot or stove? 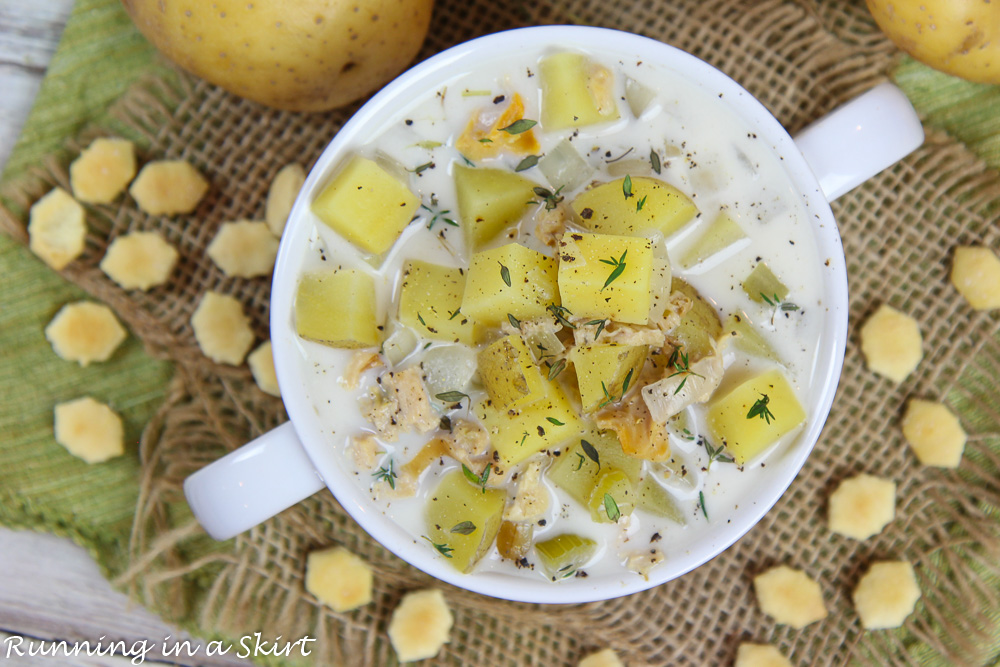 This Crockpot Clam Chowder is the Perfect Weekday Meal!

My family loves this simple Crockpot Clam Chowder for dinner or lunch and I love how easy it is to make.  Plus, with my healthy swaps, it's even more enjoyable. Here are a few ideas for toppings.

Or round out your meal with some of these ideas. 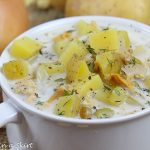 Store any leftovers in an airtight container in the fridge for up to 5 days. Reheat in the microwave or stovetop. For a lower sodium soup substitute more low sodium vegetable broth for the clam juice. For a creamier or richer soup use half and half instead of milk.