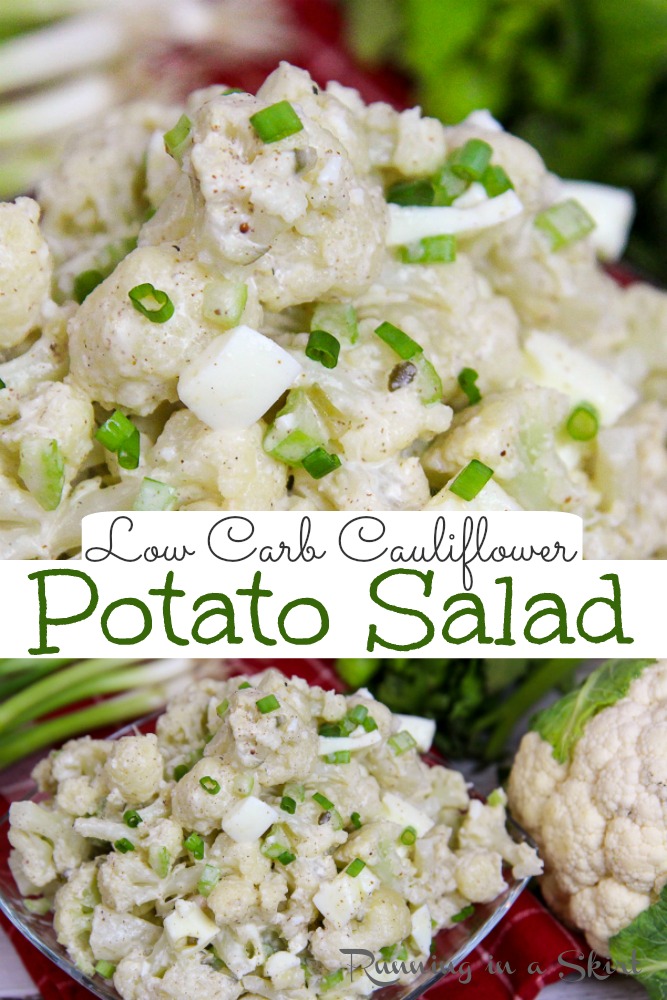 The BEST Cauliflower Potato Salad Recipe is a healthy cauliflower mock potato salad made with cauliflower instead of potatoes.  I also swapped out traditional mayonnaise for Greek Yogurt making this Low Carb Potato Salad vitamin-packed, keto-friendly and vegetarian.  Plus its only 6 ingredients! 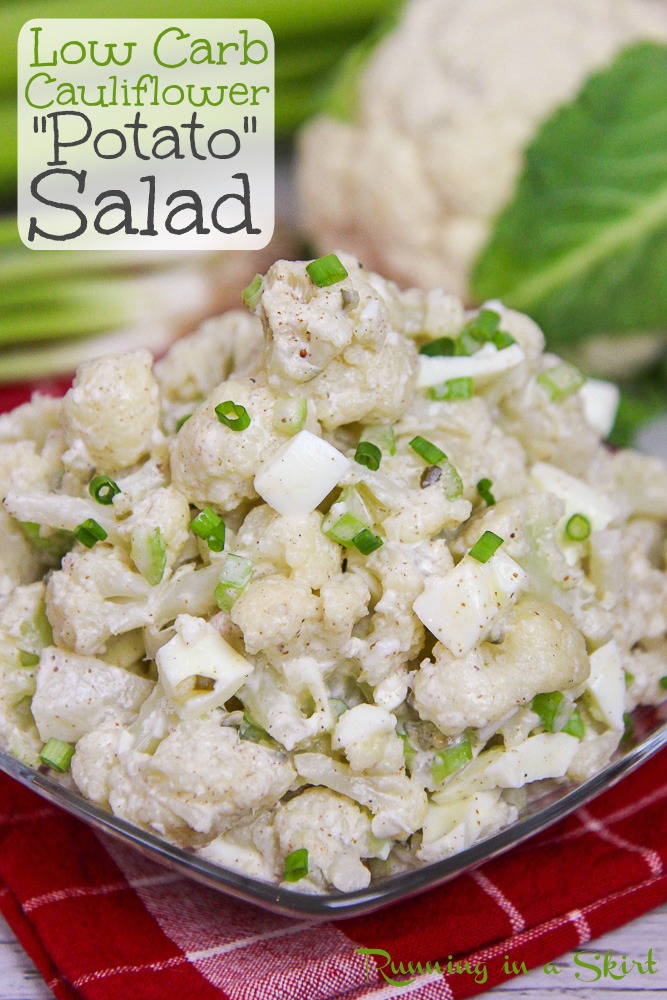 Cookout season is here in the mountains!  I love spending love evenings outside eating good food and enjoying the daylight that lingers long into the evening.  From the veggie-packed salad to traditional cookout fare...  summer food is the best.  My Cauliflower Potato Salad recipe is at the top of the list of recipes on repeat all season long.

If you are looking for a healthy barbecue side dish with an unusual twist... this is it.  My Low Carb Potato Salad makes some surprising swaps to make it super healthy AND irresistibly tasty. 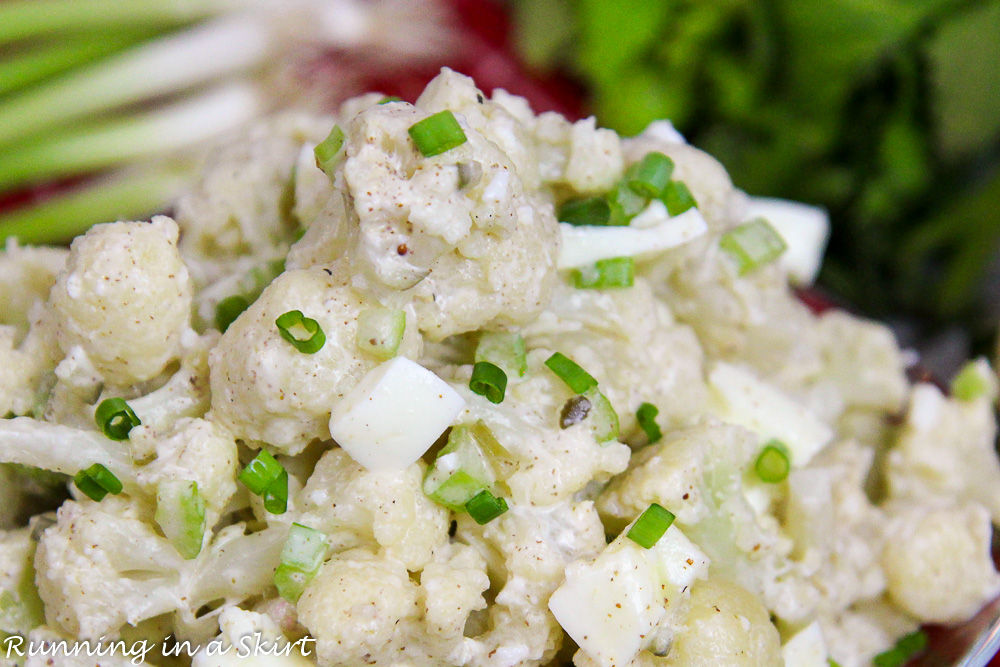 What says cookout more than potato salad!?  It's probably no big surprise that I'm not a huge fan of the traditional mayo covered kind, but I do love all the other flavors in it.   You can't wrong with the combination of creamy eggs, mustard, and relish!  Plus this entire recipe is made with only six ingredients.

So I set out to make a healthier version for the season and along came THE BEST Cauliflower Potato Salad recipe.  This Low Carb Potato Salad is made with cauliflower not only tastes amazing but is low-carb, low-calorie, and nutrient-packed. 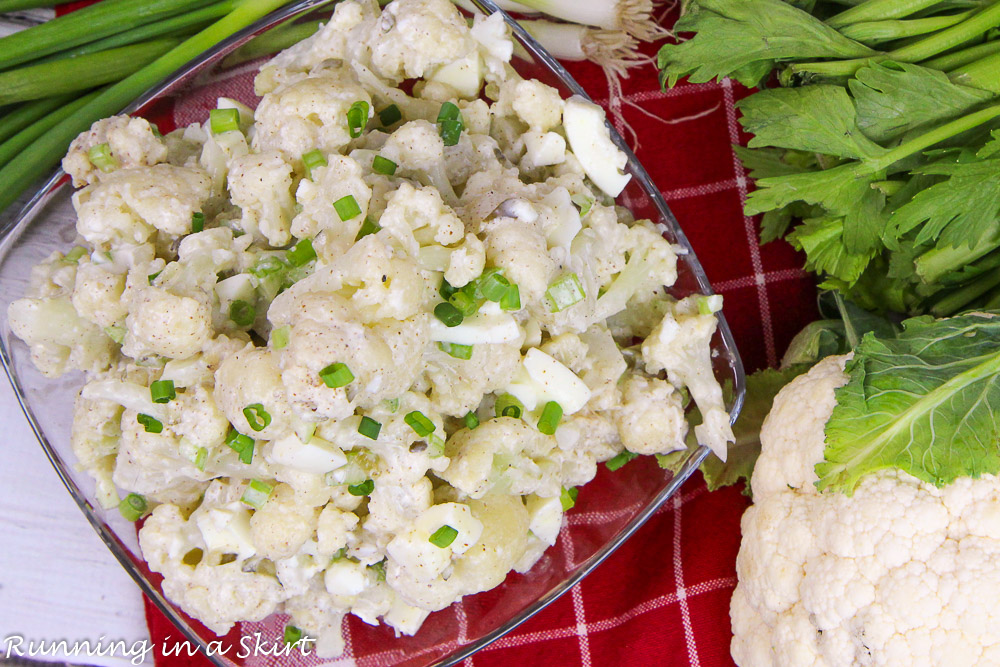 Now, to be completely honest with you I personally have nothing against eating carbs.  I don't follow a low carb or keto diet (I am a pescatarian!) and I love potatoes of all kinds.  BUT I know many of you avoid carbs (hello... Pops!) or eat keto.  If that works well for your diet this is a great Low Carb Potato Salad for you.  I'm a firm believer in finding what works for your body and finding balance.

Even if you don't follow any diets this is still a super tasty summer side dish that's packed with vitamins from the cauliflower and probiotics from the greek yogurt!  It is much healthier than a traditional potato salad.  An entire serving of this salad is only 50 calories!

But even though I don't actually follow low-carb I really appreciate this Cauliflower Potato Salad recipe because cauliflower is such a hidden superfood!  Did you know it is packed with vitamin C?  It also has vitamin K, folate, and vitamin B6 among others.

I was surprised to learn that because the cauliflower is white!  Since it's not part of the "rainbow" I never really thought of it having all those nutrients.  But it does!  The egg and greek yogurt in this also add some protein, which is great for a vegetarian diet. 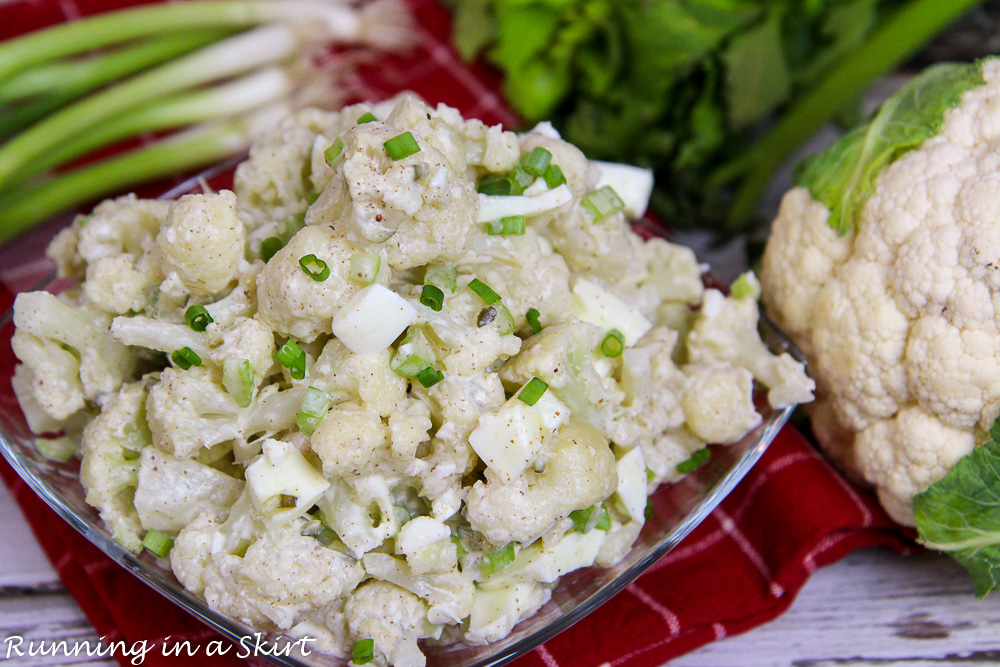 This Mock Low Carb Potato Salad is made with just SIX ingredients.

You can garnish your potato salad with extra celery salt and green onions.

How do you make Cauliflower Potato Salad? 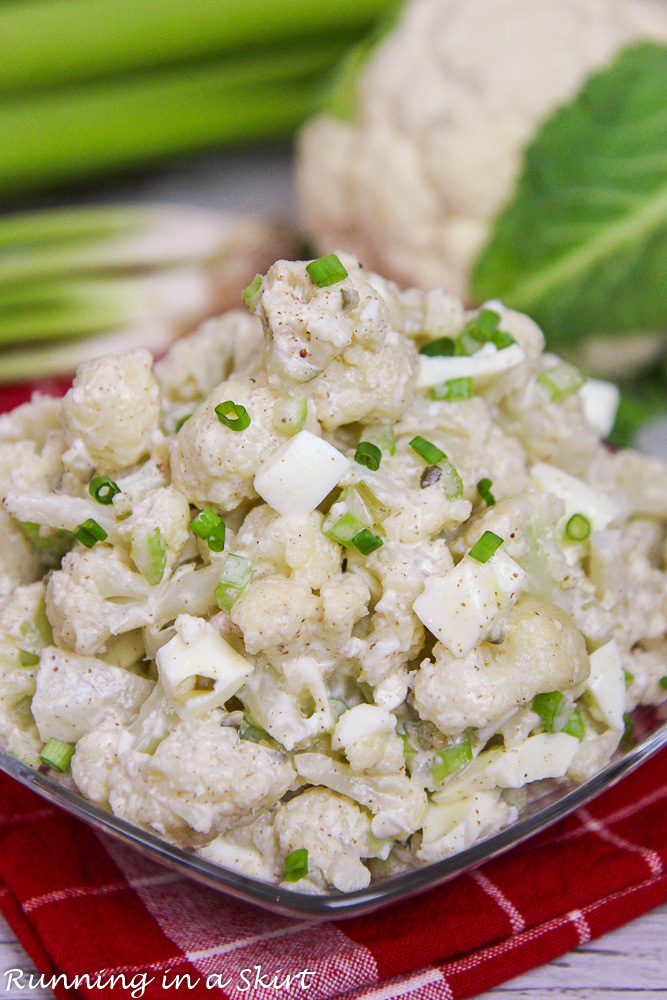 What do I serve with Cauliflower Potato Salad?

This Cauliflower Potato Salad takes like traditional potato salad so it goes great with any of your favorite cookout dishes.  Here are a few of mine:

Step aside traditional potato salad, a new star of summer is in town! I hope you enjoy making my Potato Salad made with cauliflower as much as I do. 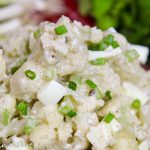 Served chilled or room temperature.  I think it tastes best after sitting in the fridge for a few hours.