I did something completely out of character for me this past weekend.  I made a last minute decision to run what may be the final Bele Chere 5K.  Yes, I did something spontaneous!  I have been itching to do a race since I had to pull out of the Frostbite 10K last February.  I just wanted to really feel like a runner again

I ran the Bele Chere 5K twice in my first couple years of running and always enjoyed the big race that closed off streets through the heart of our downtown.  A “big” race for Asheville is about 1,200 people.  The festival around the race is being cancelled due to lack of city funds, so the race, will probably not happen again.  I suspect organizers will put something else together, but with the festival gone, it will not be the same.  I did not want to miss out on running the last one.

I knew I wasn’t in real racing shape and really hadn't trained for the race.  But I have consistently been running 3 miles several times a week and I was positive I could finish the race running.  And most of the time that is a victory alone! 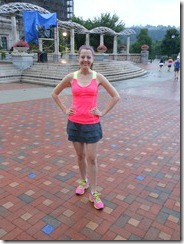 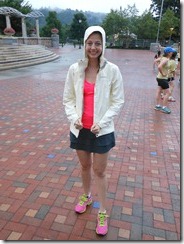 And… My rain coat.  Yup- it was raining.  It stormed all night and continued to rain in the morning.  I tried to stay a little dry before gun time.  My dad was in town and was kind enough to wake up for the early race and carry a giant umbrella and take some pictures for me.

I looked at the radar before we left the car and there was a giant cell heading straight for downtown.   I knew it was coming, but I didn’t know exactly what it would do to my race. 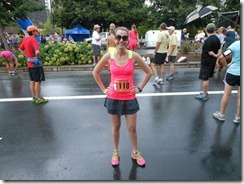 I stood in the middle of the pack waiting to move up to the start line. 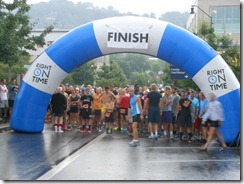 And we are off! 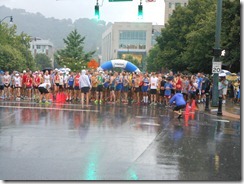 Just as the gun fired it started to POUR!  I usually avoid running outside in inclement weather (hello treadmill!) and had never before run in rain this heavy.  In the 19 races I’ve run I have run in cold, heat, fog and light rain but nothing like this!  At first it was a little shocking, but after you were drenched it didn’t matter as much. 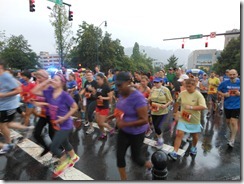 I did struggle with my wet and heavy shoes.  There were huge puddles everywhere.  People started joking that this was going to end up like a mud run.  I also ended up with water pouring down my face so badly that I almost had a contact wash out of my eye. I had to blink it back into place.  I saw people all around me stop running and a few even looked like they were going to quit. 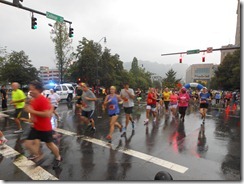 Mile 1 was fast.  Too fast.  Despite the downpour, I felt pumped to be back in the game.  It was pouring so hard though that I could hardly even see my pace watch.  Pace- 9:10.  It felt mainly downhill and smooth.  I had no idea how fast I could really run so I didn’t have any set goal paces.

Mile 2 was probably a better goal pace for me considering I’m coming back after an extended illness and surgery.  Pace- 9:52!  Hello hills!

Mile 3 was hard.  The wet shoes and clothes started feeling yucky.  The hills also started to feel brutal.  I believe we were coming back up from the smooth downhill in mile 1.  On the downhill bursts in Mile 3 I started to worry I was going to slip if I pushed too hard.  10:21- DOH! 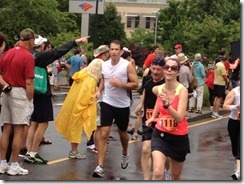 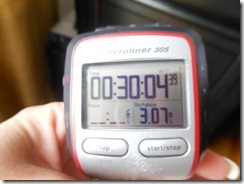 Couldn’t I have at least pulled another 5 seconds out of my legs to break 30 minutes??!! Aw man!!! 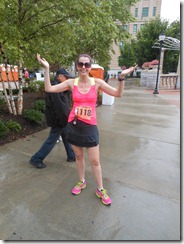 Considering the circumstances, I think it actually went pretty well.  It was only June 17th that I posted about my first run back after surgery.  I knew I had to go into it remembering I’m just getting back into shape and my time wasn’t going to be where I was before.  I knew a PR wasn’t going to happen (My 5K PR is 27:22) so it was about having a good time.   Mission accomplished; I was so happy to just be able to run a race.  A month ago I would not have even been able to finish this race running.

There are two minor victories and race accomplishments though….

AND… remember how in this post I wrote that my short term running goal was to run 3 miles in under 30 minutes?  Well, according to my GPS I hit the 3 mile mark at 29:22!! BOO-YA! 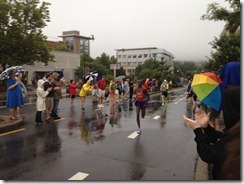 Maybe one day I’ll look a little more like the winner finishing this race!  He looks fierce!

HAVE YOU EVER SIGNED UP FOR A RACE LAST MINUTE?

HAVE YOU EVER RUN A RACE IN THE POURING RAIN?