Hey y'all!  Last Sunday we decided to see my SIL Megan and her family who live on Lake Murray.  After A LOT of debate, the Hub's and I decided we felt safer seeing them now when we all have been pretty isolated than as the weeks go by and we all do a few more things.  It's so hard to know what the right decisions are to keep everyone healthy.

Our day trip started early and we got their mid-morning with enough time to play in the kiddie pool before lunch.  My nephew's Owen and Keegan have grown so much.  You may remember Keegan is just two weeks older than the boys. 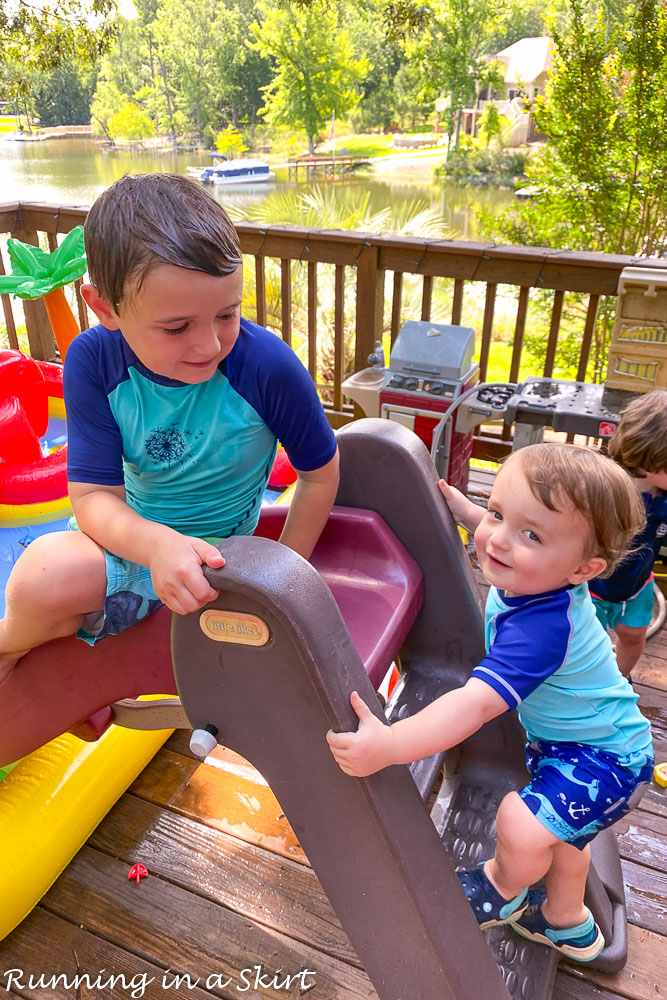 Hunter and Jackson loved the pool and the big kid slide. 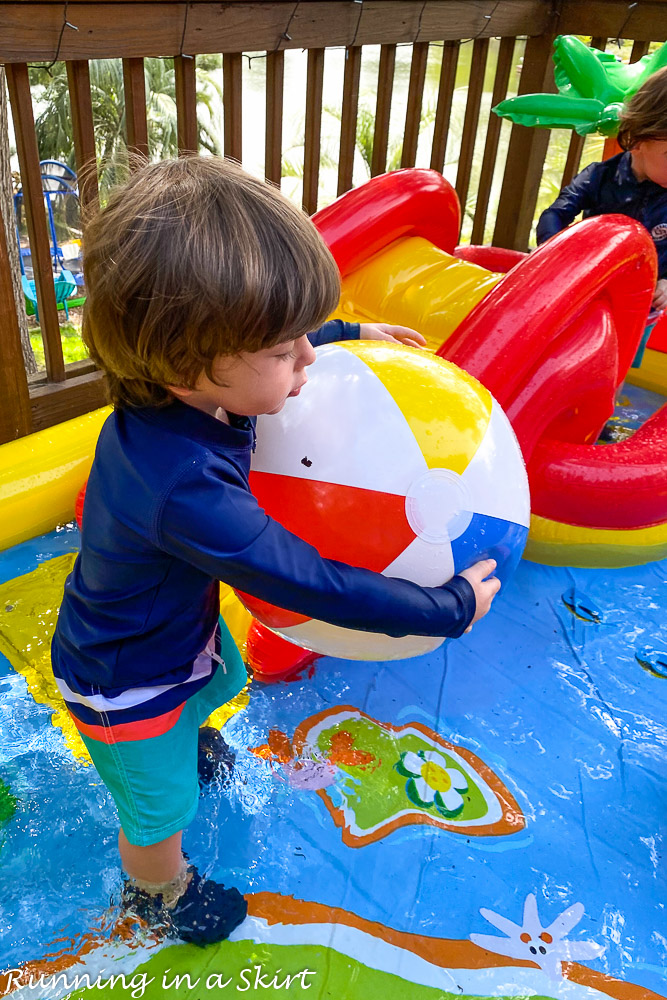 After the nap, we packed everyone on Megan and Justin's boat for a ride. 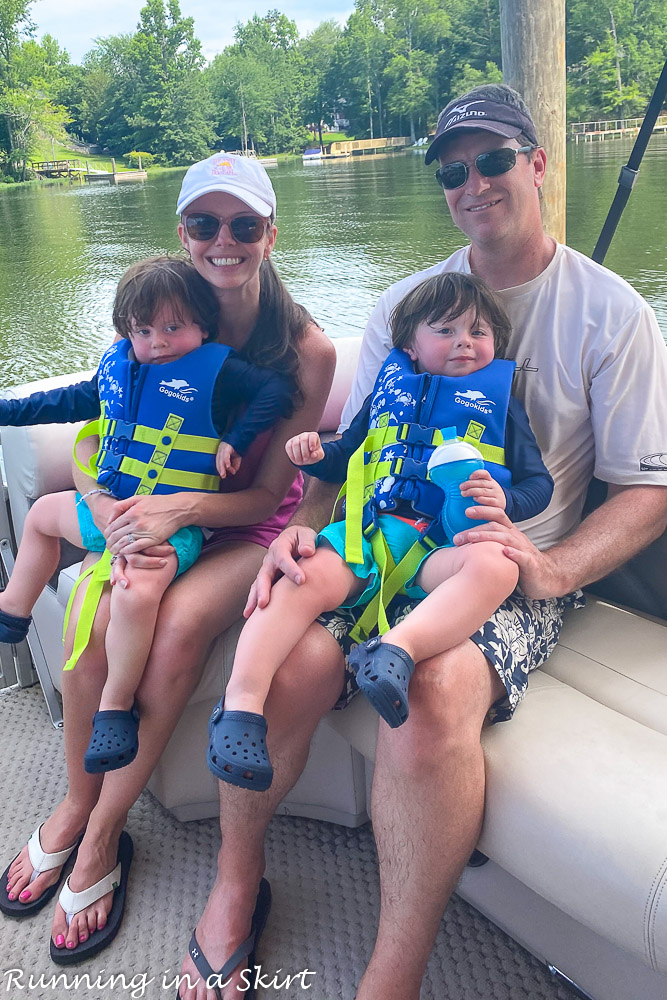 It was the boy's first boat ride and they did such a good job. 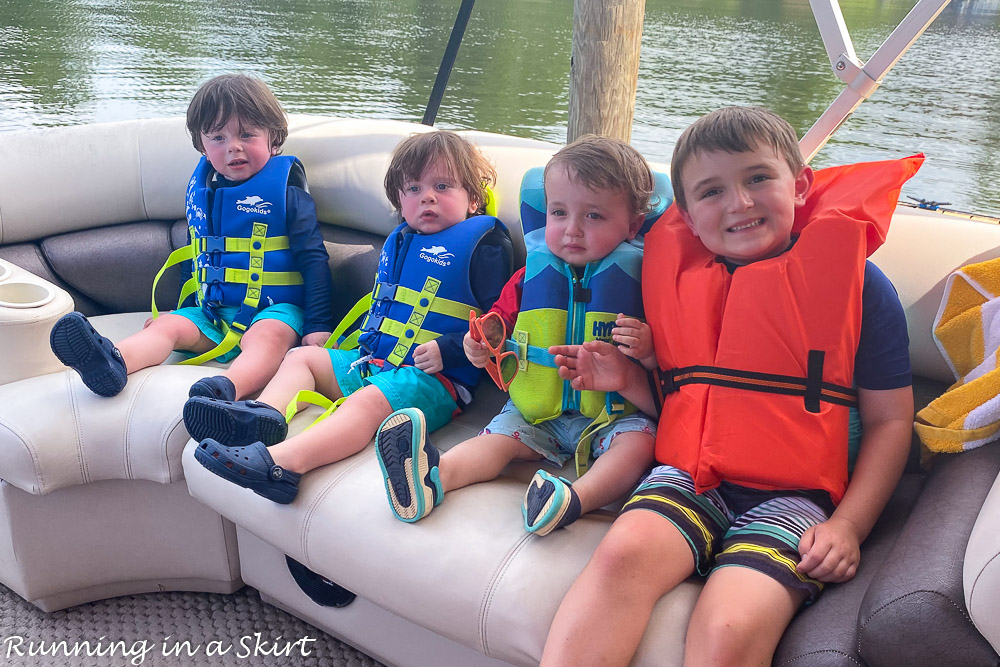 Hunter has actually taken an interest in boats since our Hilton Head trip.  We could see boats in the water from the window seat of our rental and he would enthusiastically watch them and say "boat! boat! boat!" every time he saw one.  We told him boats went "toot toot!"  He'd then say "toot toot" and "bye" as the left.  It really was adorable.

I think his little mind was blown being on a boat AND seeing more boats.  He kept saying "boat" again and using his sign for "more." It was super cute. 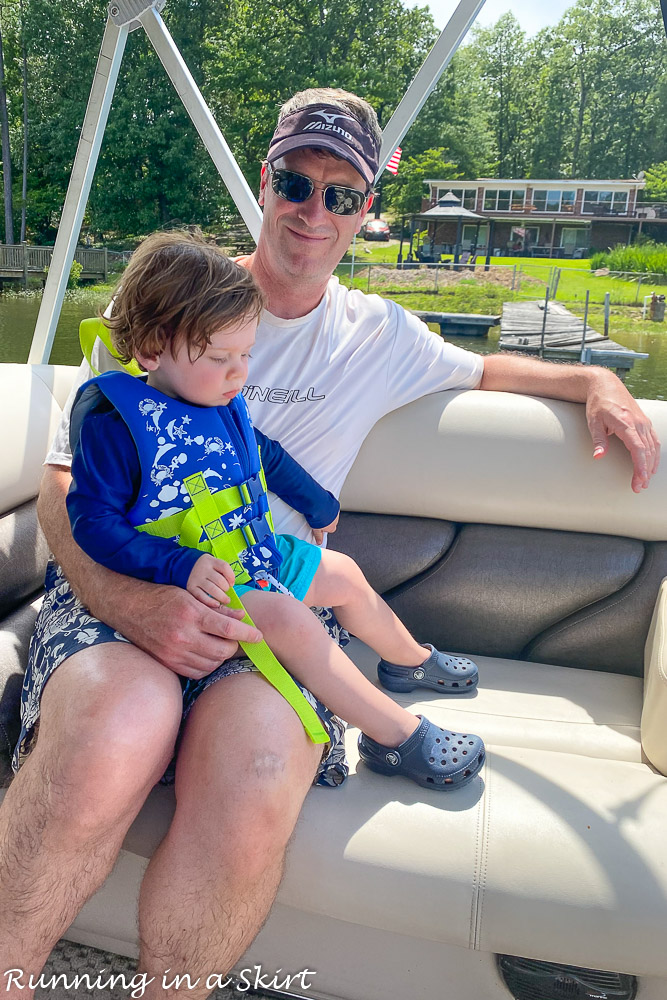 He was definitely in his element. 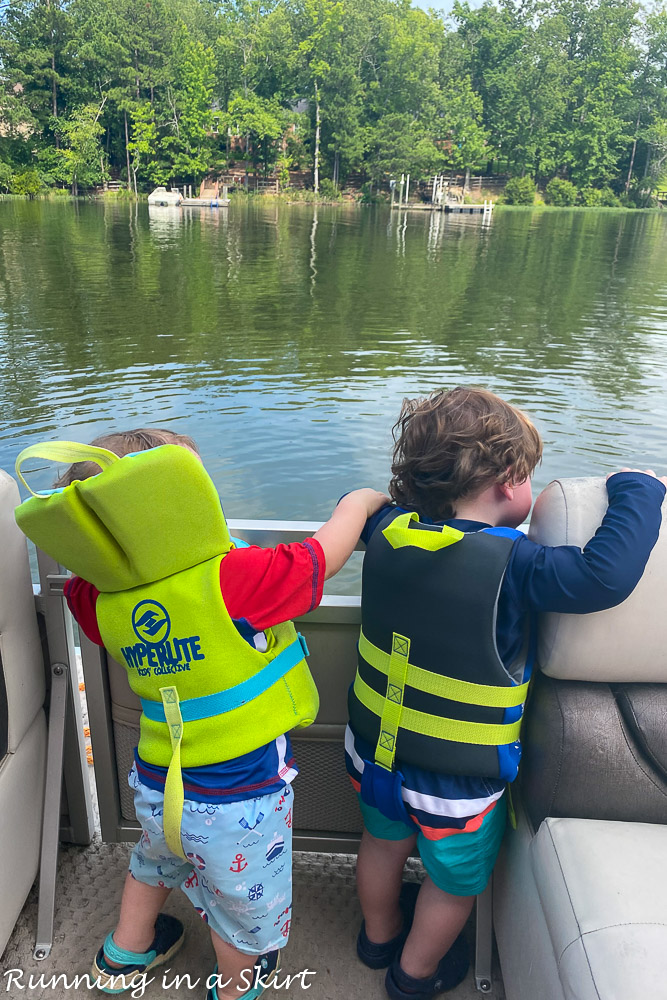 Jackson did good but he has been struggling with some motion sickness in the car and plane so we decided to not push him on the boat when he looked a little less animated than normal. 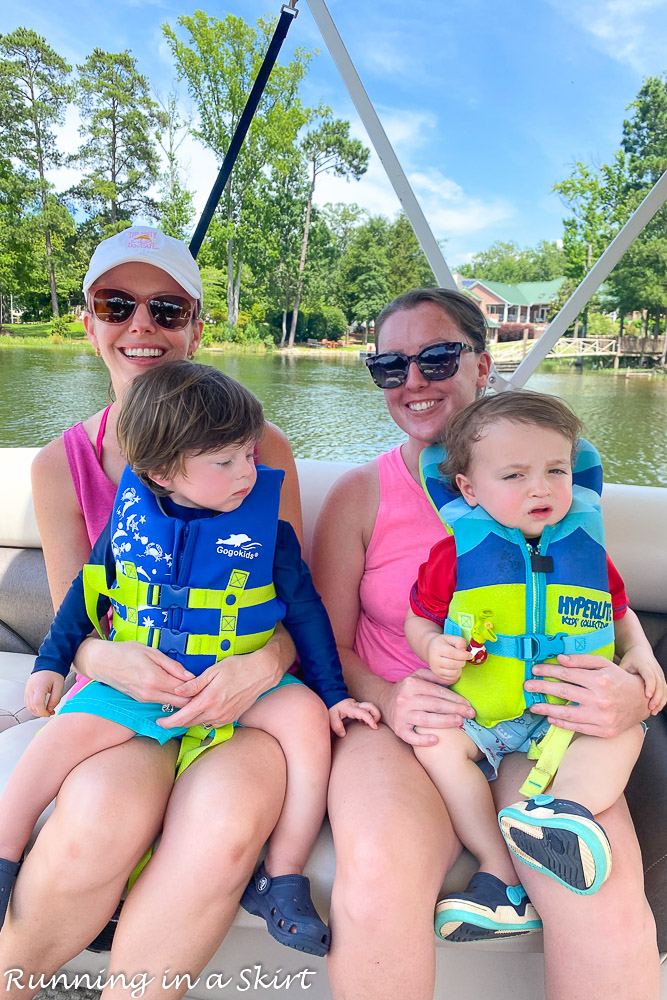 He was still really sweet and seemed to enjoy the experience. 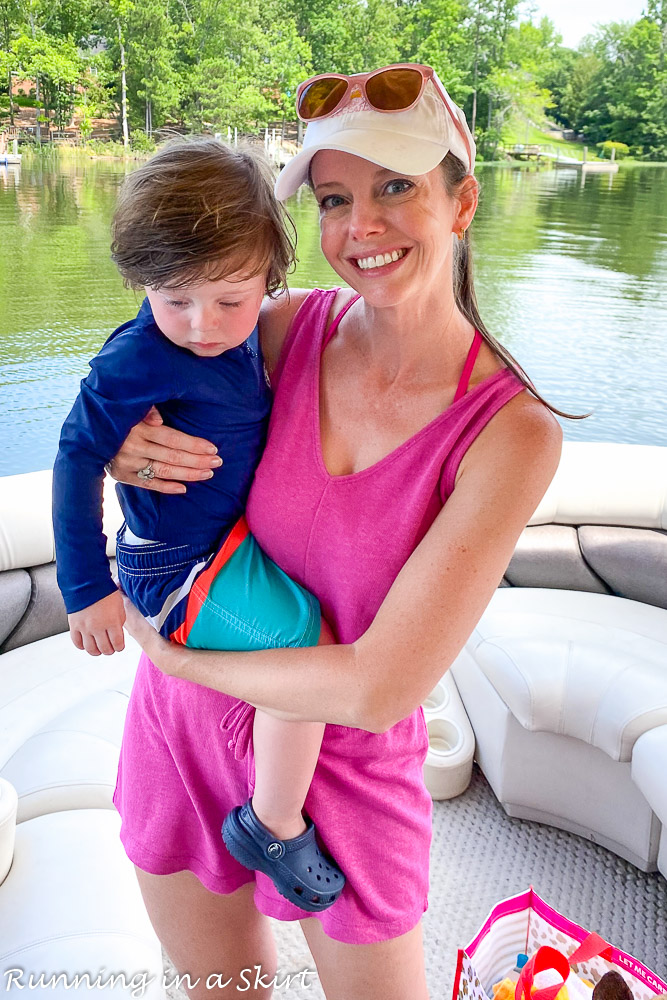 The boys definitely lived their best life on Sunday!  They all had so much fun playing together and I can't believe how much everyone has grown since we were able to see them last. 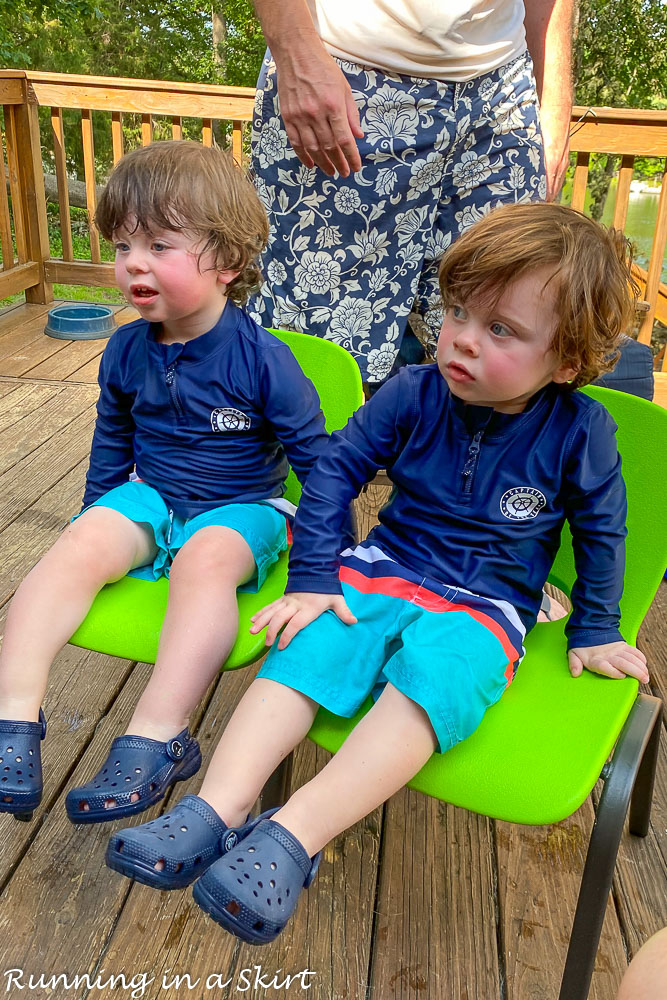 We ended up packing everyone up and heading back home to Asheville around bedtime.  I thought they would sleep in the car but it didn't work that way.  Hunter stayed up the entire ride saying "boat!" and "toot toot!"  I think we may have a future boater in our hands. 🙂

That was more or less the highlight of the week!  We are heading to Pittsburgh this weekend to see the Hub's family since they have been isolated too.  It has been way too long since the boys have seen their Grandparents and we decided to just make it happen.  It seemed safer for us to fly up to them in the small plane without having to make any stops than them driving down here and having to stop along the way.  I'm so excited to see family and finally have a little company!

I hope you are able to have a little fun too.  Have a blessed weekend everyone.