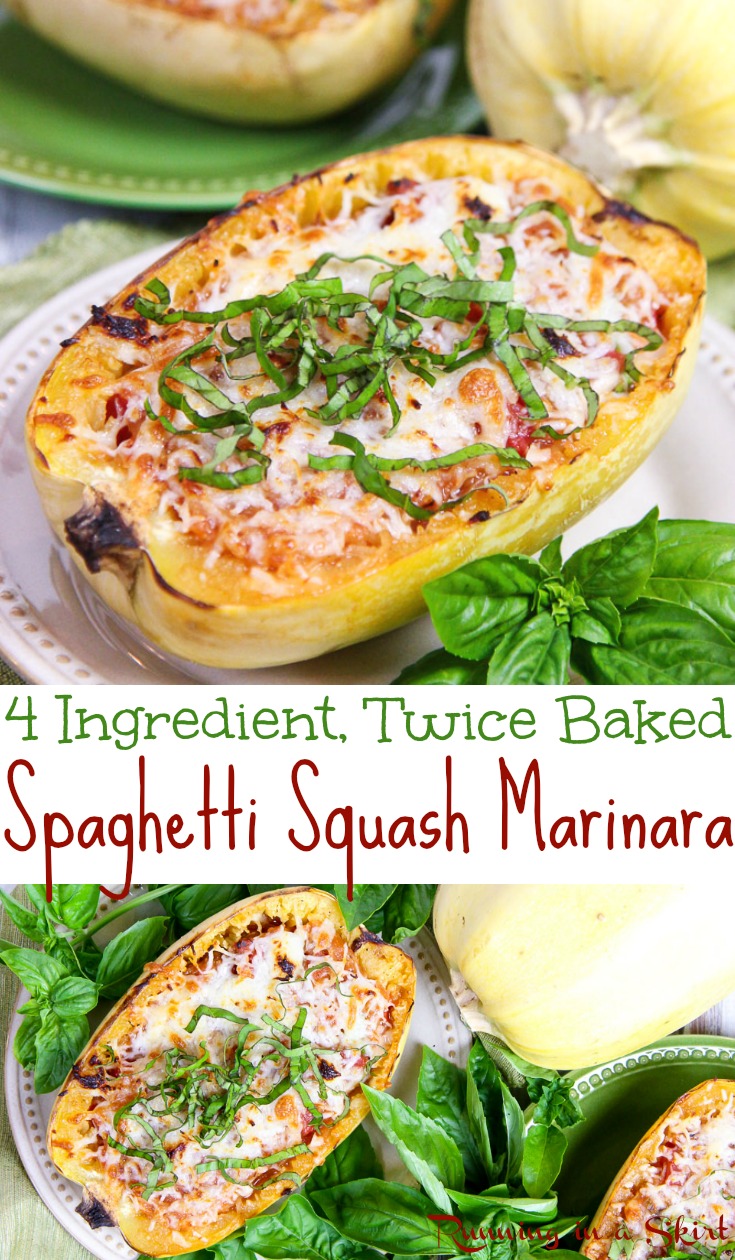 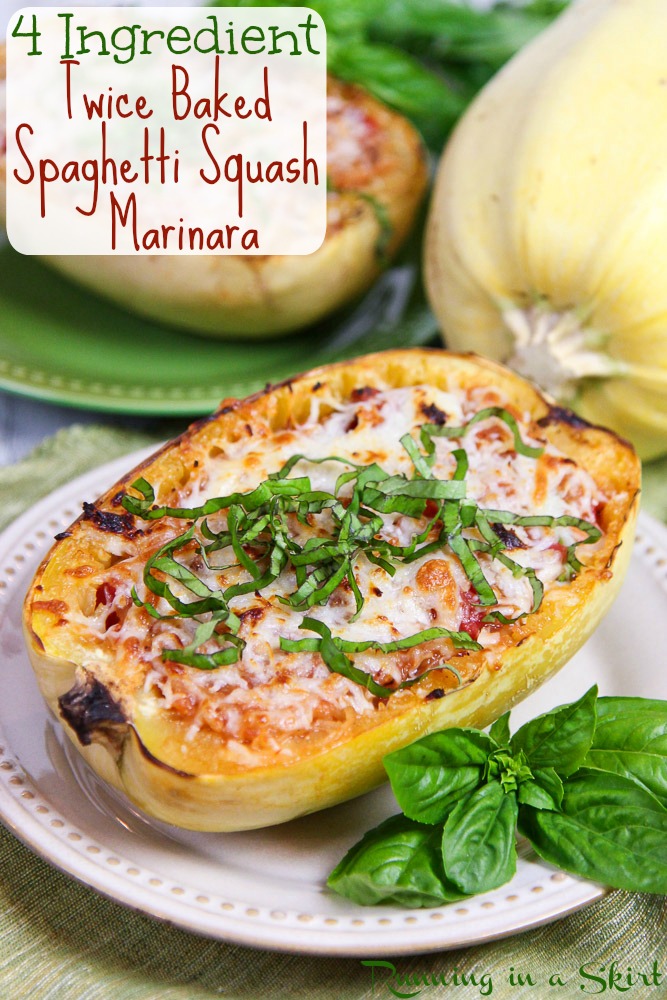 Ohhhhhh I had the best weekend.  I had a houseful of some of my oldest friends in town for my girls baby shower and it was so lovely.  I literally had people fly in from across the country and world to celebrate the twins.  I'm putting together a full post to share with you Friday.

In the meantime, I thought I'd share one of my FAVORITE new recipes I've created... my Twice Baked Spaghetti Squash Marinara recipe.  I made this for the blog and then proceeded to make it once every few weeks since then.  It's one of those recipes that SO easy to make it's easy to add to your dinner rotation. 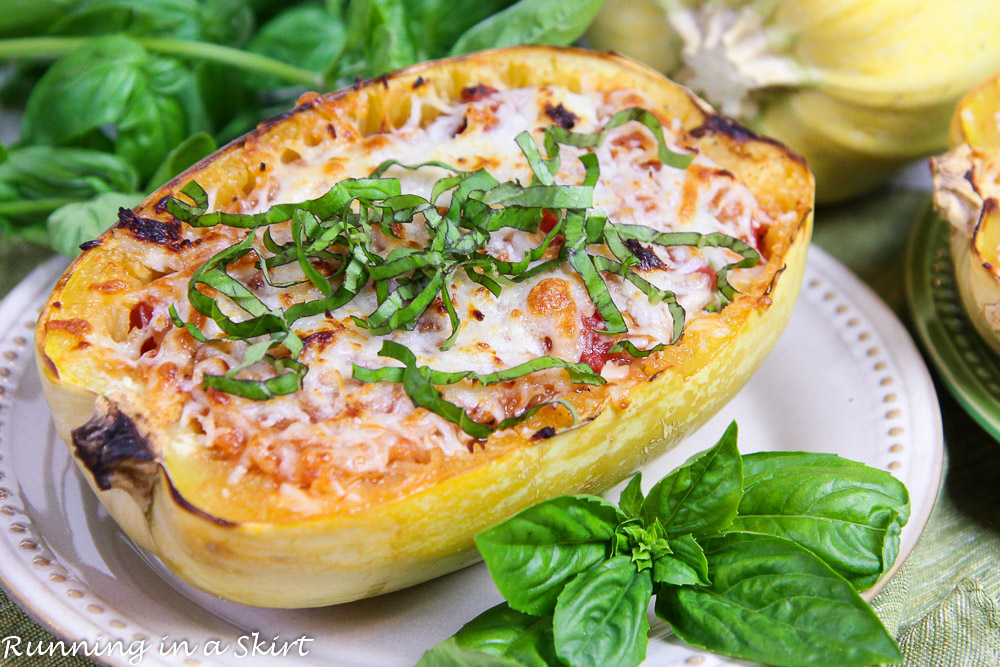 If you aren't familiar with spaghetti squash, it's a hearty, tough-shelled squash that shreds like spaghetti noodles when you take a fork to it after you bake it.  There are so many ways to use it, but I think it's the most fun to eat when you stuff it back into the hard shell and twice bake it like a potato. 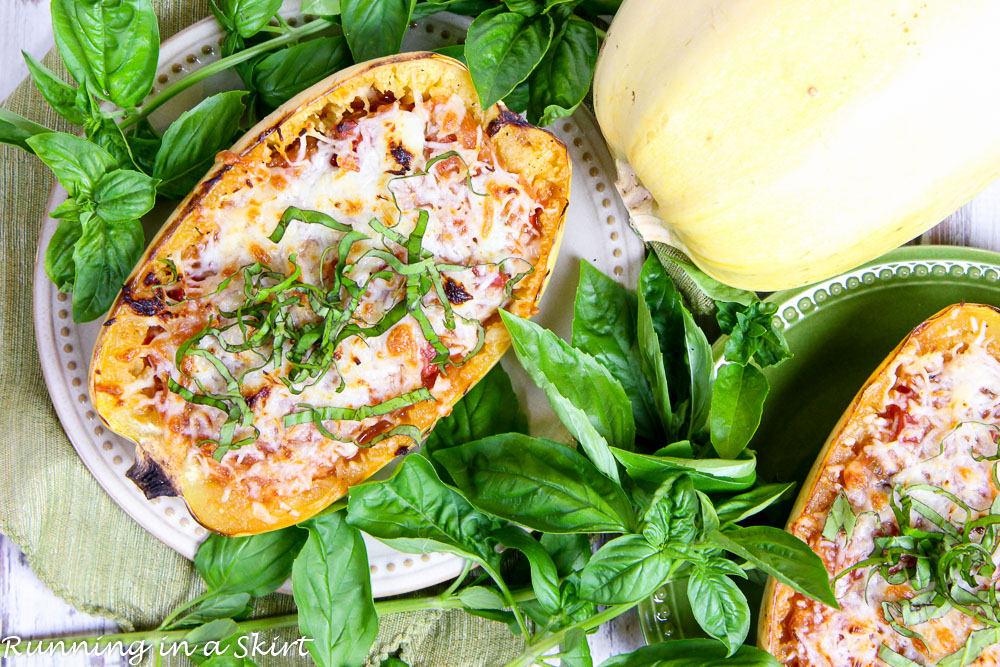 So for this Twice Baked Spaghetti Squash Marinara recipe, all you need is one spaghetti squash.  My life hack for this post is to pierce the tough squash with a knife and pop the entire thing in the microwave for a few minutes before you even attempt to cut it in half.

Next, you cut it and place both sides face down on a baking dish.  It takes a while to fully cook it, but it's hands-off time and you can even that part ahead of time. 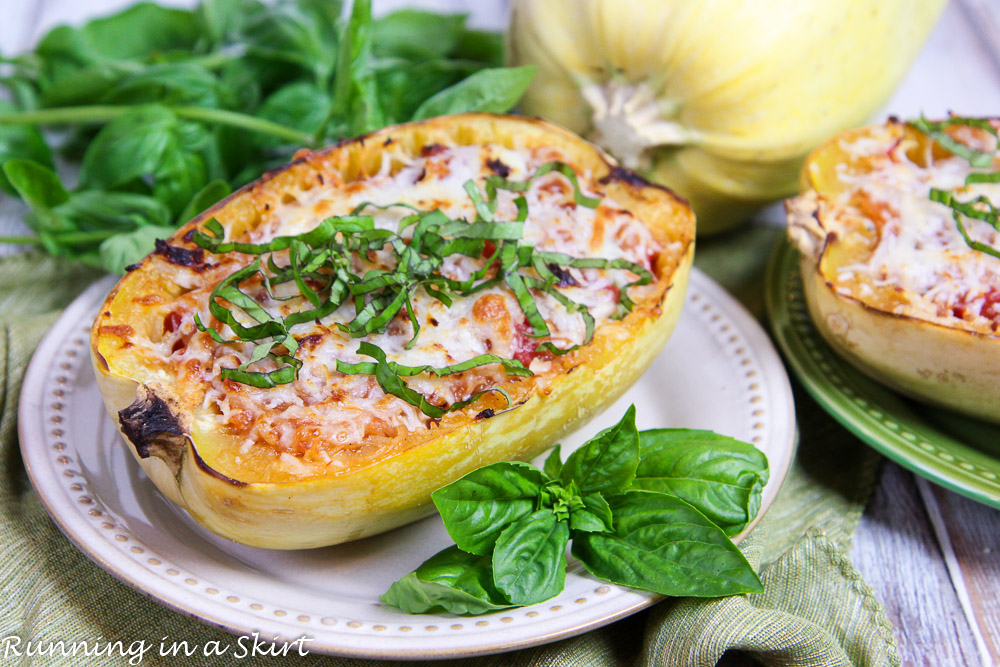 After the squash is tender, you scoop out the seeds like a pumpkin and use a fork to clear out the "noodles" being careful to keep the squash shell intact.  I then add them to a large bowl with canned tomatoes, marinara sauce, and a little cheese!  I'll hand huge handfuls of fresh basil if I have it.

The last step in making my Twice Baked Spaghetti Squash Marinara recipe is to stuff the squash mixture back into the shell and add a nice topping of cheese!  You can even make the entire dish to this point ahead of time and at dinner pop the finished product in the oven.  Just add a little more cooking time to account for them being in the fridge. 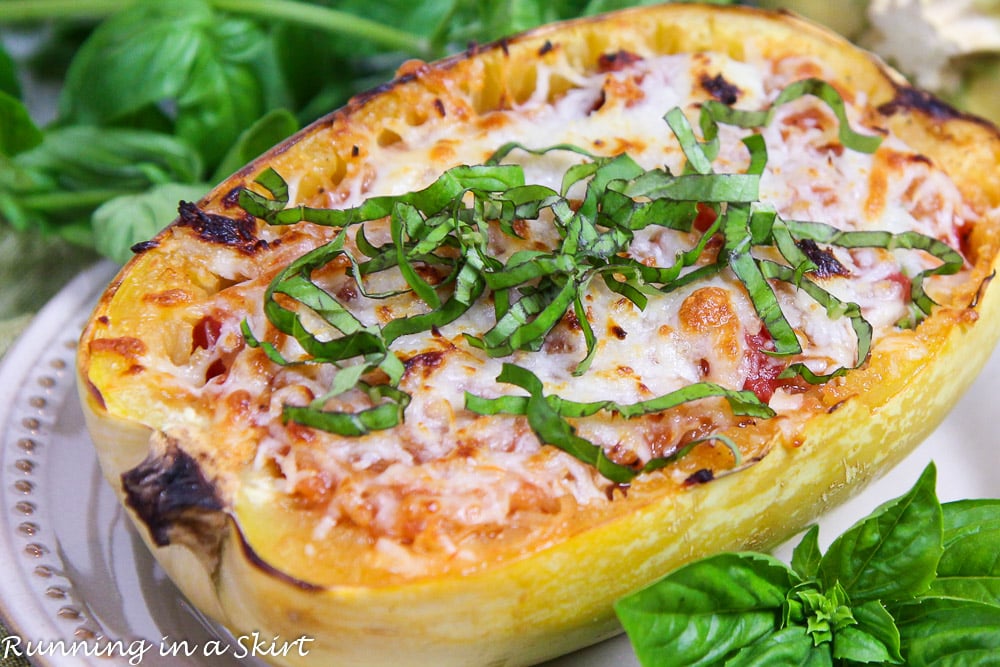 My Twice Baked Spaghetti Squash Marinara recipe bakes up bubbly like a baked ziti but this pasta-free version is so much lighter and low carb.  Plus you get all sorts of wonderful vitamins from the squash!

I knew it was a hit when the Hubs said, "This is my favorite dish you've made in a while!" WOOP! 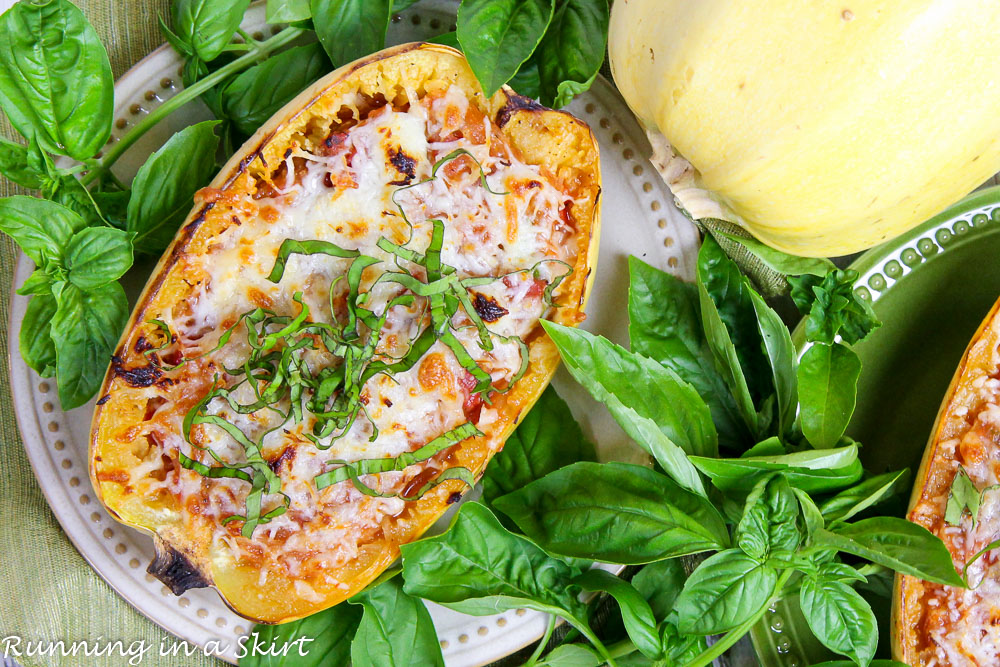 I hope you will give my Twice Baked Spaghetti Squash Marinara recipe a try!  It's quickly becoming a family favorite of ours and I'm sure you'll love it too. 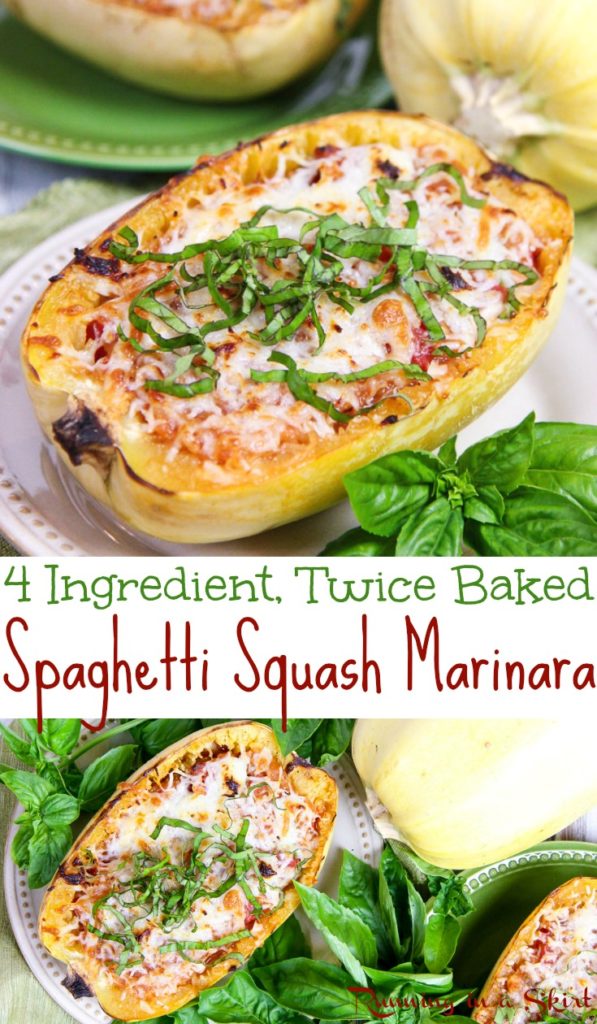 *The exact amount of sauce and cheese will vary due to the size of your squash.  Just add enough until the noodles are covered but not soggy. **Try  my homemade Crock Pot Marinara Sauce 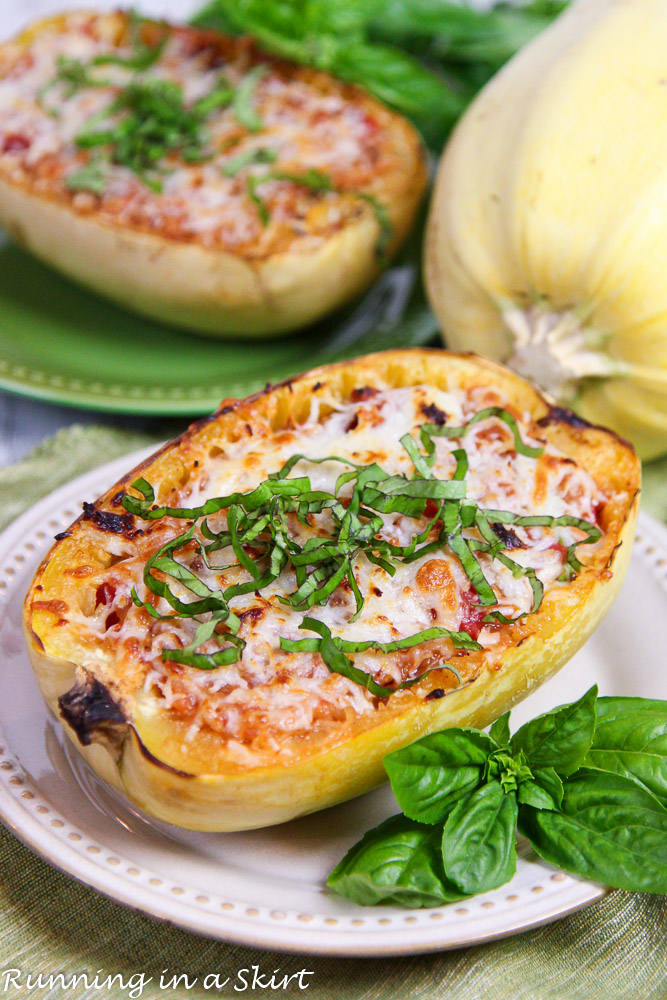 I’m linking up my Twice Baked Spaghetti Squash Marinara recipe with: Meatless Monday, Meatless Monday, Full Plate Thursday, Foodie Friday, and the Weekend Potluck. Thanks so much ladies for the link up parties!