It’s under two weeks until the Chicago Marathon and I’m resting.  Turns out my sore hips were actually a strained gluteal muscle.  Yes, a strained butt.  The doctor said it’s a minor problem and I’ll be fine for the race.  I just need to make sure I don’t make it worse and give it some time to heal now so I can go into the marathon as healthy as possible.  I love running and exercising, so resting is hard for me. Ugh!

To keep my mind focused on running 26.2 miles in a few weeks I ordered some running movies.  I have “Spirit of the Marathon”, “Prefontaine”, and “Chariots of Fire” to watch over the next few weeks.   My husband was thrilled…. really. If that doesn’t get me in the running spirit, perhaps Marathon Monday will! Yay!

Today’s story is from Asheville runner and Girls on the Run Manager Rachelle Sorensen. 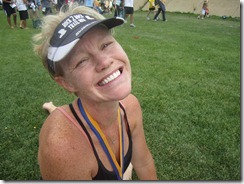 Rachelle’s marathon story is awesome. She shares how she also ran a marathon as a charity runner and how it meant so much to her to finish the race.  AND, she ran her marathon in another country.  Very cool.  Thank you Rachelle for sharing your story.  It is truly an inspiration! I can only hope my marathon goes as well as yours.

I ran my first marathon in Dublin, Ireland in October 2000. It was just a few days before my 30th birthday. I ran as a member of Team Diabetes in part to honor my dad, a life-long diabetic and part to honor myself and my need to complete something.  Before I took up the sport of running, I spent an extra-ordinary amount of time “running around in circles.” I have always had a lot of energy but lacked focus and follow through. My road to Dublin was littered with unfinished projects and the ghosts of unmet goals.  I needed to start something hard and more importantly, I needed to finish.

I trained hard, logging about 40 miles a week for several months. It was quite a roller coaster, although I have always been active and athletic, running was still relatively new to me. It is a humbling sport, there were days when I felt like my feet were made of cement followed by days that I felt I could run all day. The difference was simply the day. I remember driving to Hendersonville from Asheville once during my training and thinking, “I don’t even like driving this far….how in the world am I going to run this distance”. That feeling of fear was compounded when a knee injury forced me to stop training a couple of weeks early and at a time when my longest run was only 19 miles. At that point I turned inward and instead of running, my training became “virtual”. I would spend a little time each day visualizing myself running with grace and ease past each the mile marker. Mile 1, Mile 2….Mile 26! I also focused on eating well, staying hydrated and did exercises to strengthen my knee.

After what seemed like years of training and talking about the marathon, it was time to catch a plane. The excitement of traveling to Ireland overrode any nervousness about the race. However, I was naïve and did not even consider the variables I found myself faced with once I landed in Dublin. The time change, the climate, the culture and the cuisine all came into play in a way I had not anticipated. Cars driving on the left side of the road, cobblestone streets and foods I didn’t recognize about did me in. I was grateful that I had a couple of days to acclimate, familiarize myself with my surroundings and find a McDonald’s. (I don’t recommend eating McDonald’s as training fuel – but man, I needed a Diet Coke and food that I was already acquainted with).

On race day morning, I rose early, ate some porridge and set out on my big adventure. Standing on the starting line was one of the happiest moments of my life. I was already so proud of myself. I hadn’t quit, I hadn’t chickened out, I was going to do this and I felt awesome!

Bang! The gun went off and so did I, along with 9,000+ other people. I dodged runners and discarded clothing for most of the first couple of miles then I found my groove and settled in to go the distance. The Dublin Marathon is called the “friendly marathon” and rightly so. The streets were lined with spectators cheering us on and encouraging us – playing fiddles and handing out bread and candy. It was absolutely amazing.

I didn’t have a time goal in mind, I had no idea what to even expect out of myself in that aspect. I chose instead to focus on finishing. I used a “one mile at a time” method and I clicked my watch timer to a new lap each time I passed a mile marker and focused simply on that mile, that 10-12 minutes. I felt strong, I felt proud, and I felt so alive and grateful to have a healthy body that could carry me this distance. To say that running this race was life-changing is an understatement.

As I approached mile 19 I was introduced to “the wall” not personally thank goodness, but I witnessed people struggling and saw their bodies start to protest. It was then that I had to really dig in, stay positive and celebrate the fact that with each step I was hitting a PR (Personal Record) and was running further than I ever had before. It worked. Finally, I saw the sign I had been looking for, Mile 26. Another .2 and done! I was finisher #3,751 with a time of 4 hours, 42 minutes and 43 seconds. At that point I could have flown home to the states fueled on my giddiness and adrenaline. I was on top of the world. I was handed a tinfoil blanket, a bottle of water and a banana – to date that is the best banana I have ever eaten. Then I hobbled over to the Guinness Factory a couple of blocks away and “replenished” with a celebratory pint.

It was a great experience and through that journey I learned that by putting one foot in front of the other and by trusting myself and the process that I can do anything. That’s a nice feeling.

Have a great race Julie! My advice, take it one step at a time and enjoy it. I can’t wait to read your story.