Make sure to check out my Hilton Head Thanksgiving recap here first.

One of the first ideas that popped into my head after the Hubs and I decided to take a break from hosting Thanksgiving this year was I'd be able to run a Turkey Trot.  The past five years I've been so busy cooking on Thanksgiving that running has been the last thing on my mind.

Luckily I found out Hilton Head has a great Turkey Trot and part of our group wanted to run with me including my SIL Danielle, my other SIL Megan, her son Owen, my friends Dan, Sommer and their kids.  I've done so many races by myself, so I was stoked that so many people decided to run it.

(These photos aren't the greatest because I was using my phone in a ziplock bag in the rain!) 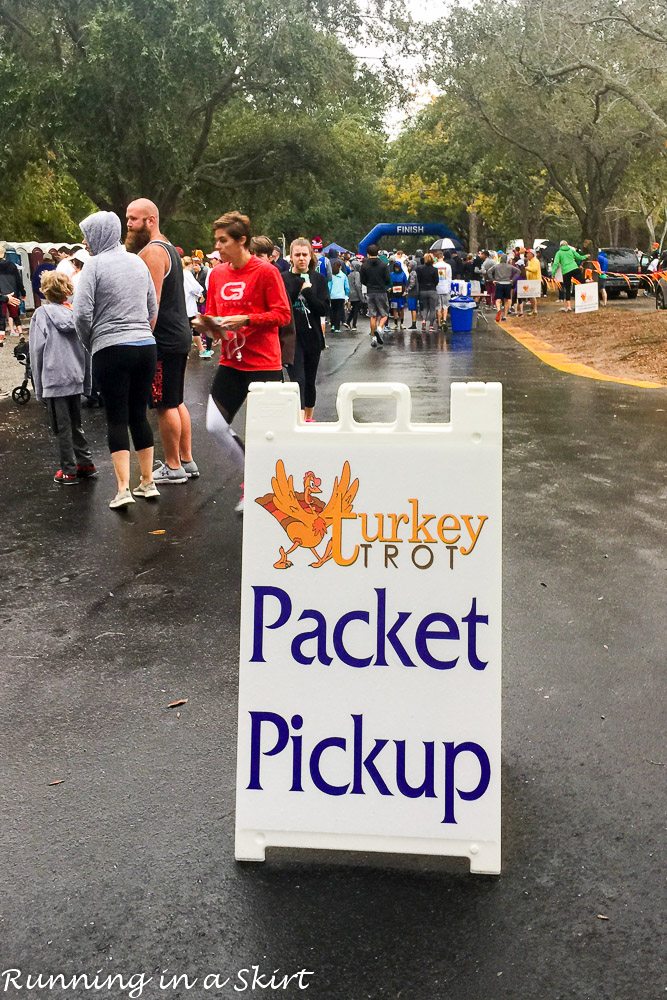 You might have noticed but I'm out of the practice with racing.  I've never stopped running, but I stopped doing so many races a few years ago.  I was doing a race every few weeks for a while and I got a little burnt out.  It had been two years since I ran my last race (where I paced Megan to a PR!) and with getting sick earlier in the month with strep I decided not to put any pressure at all on myself about the timing of the race.  I knew I was going to be slow.  I was going to run how I felt and the victory would be in crossing the finish line. 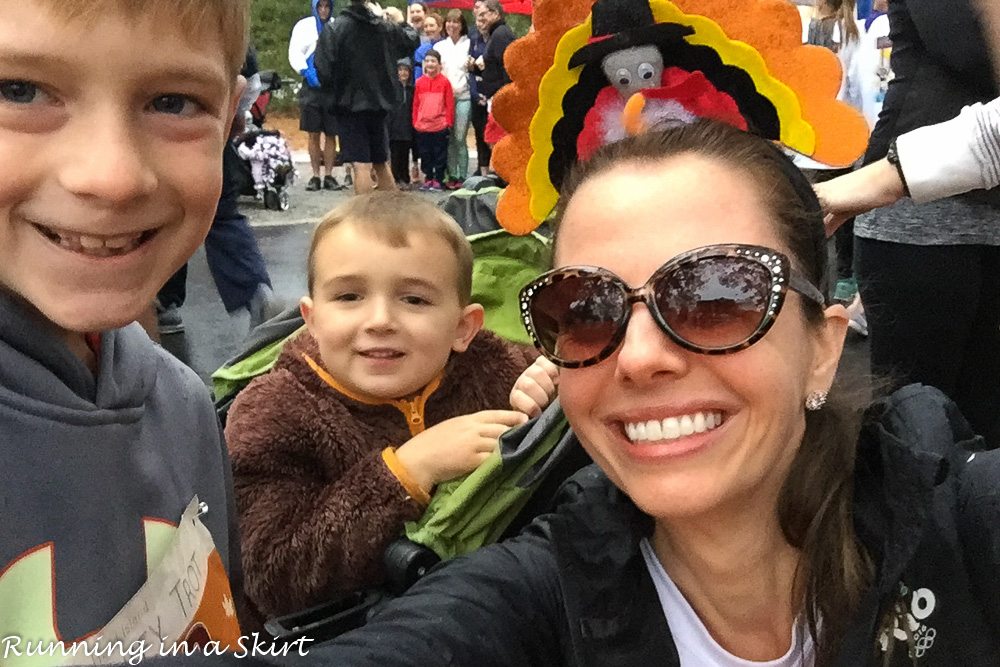 We woke up Thursday morning and it was around 50 degrees and raining.  I'm honestly someone who jumps on my treadmill at the first sign of bad weather, so I was a little bummed at the less than ideal conditions.

The back of the socks say "Run First, Gobble Later..." 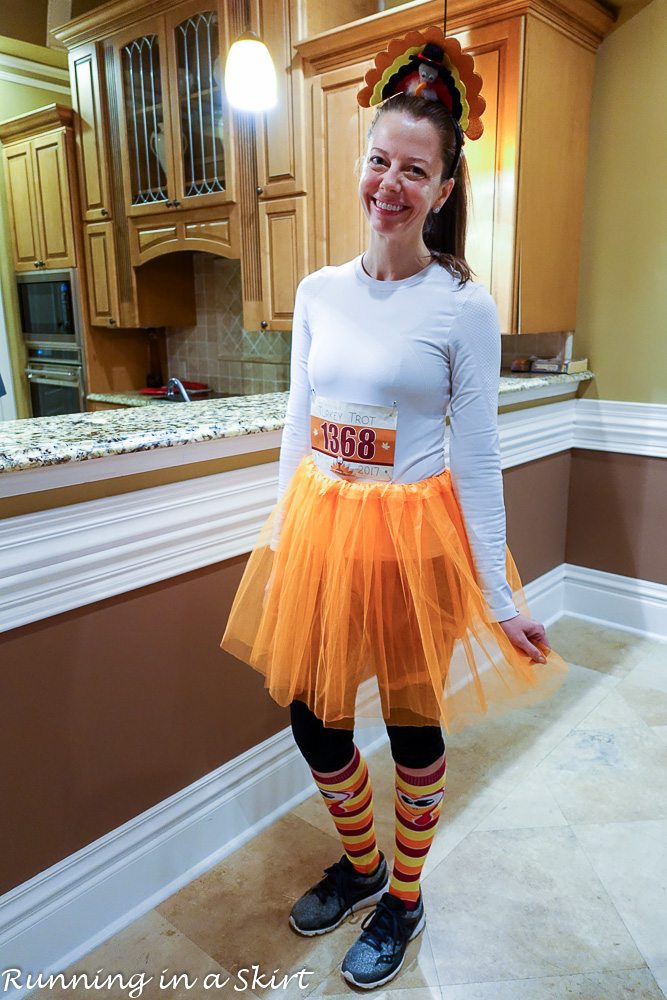 Plus running in a tutu in the rain seemed beyond silly, but I decided to embrace it. 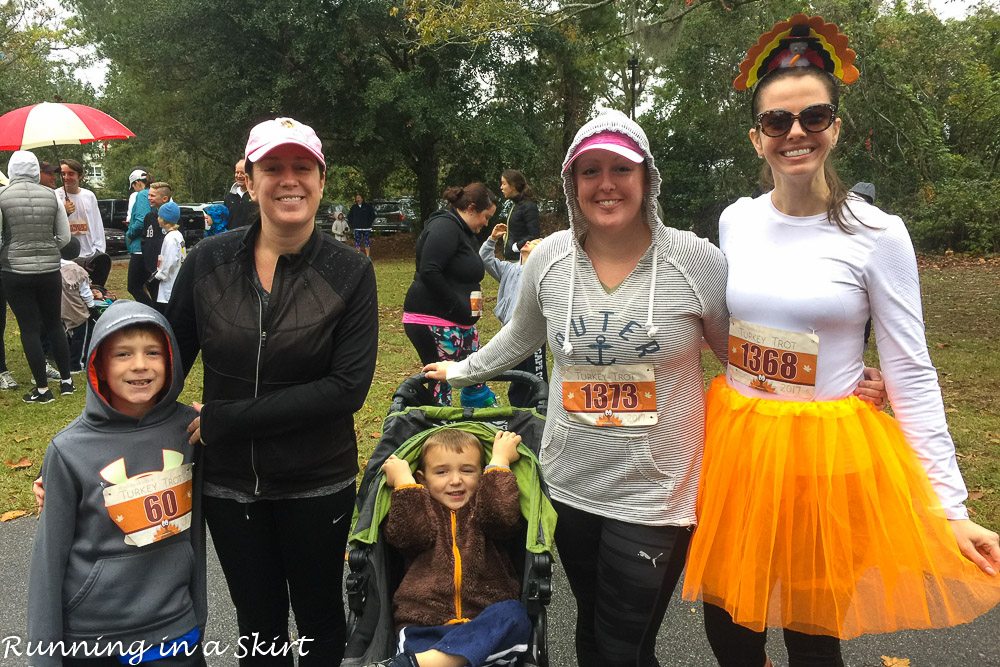 Some of our group debated whether to actually run or not because of the chilly rain, but in the end most of us made it to the start line. 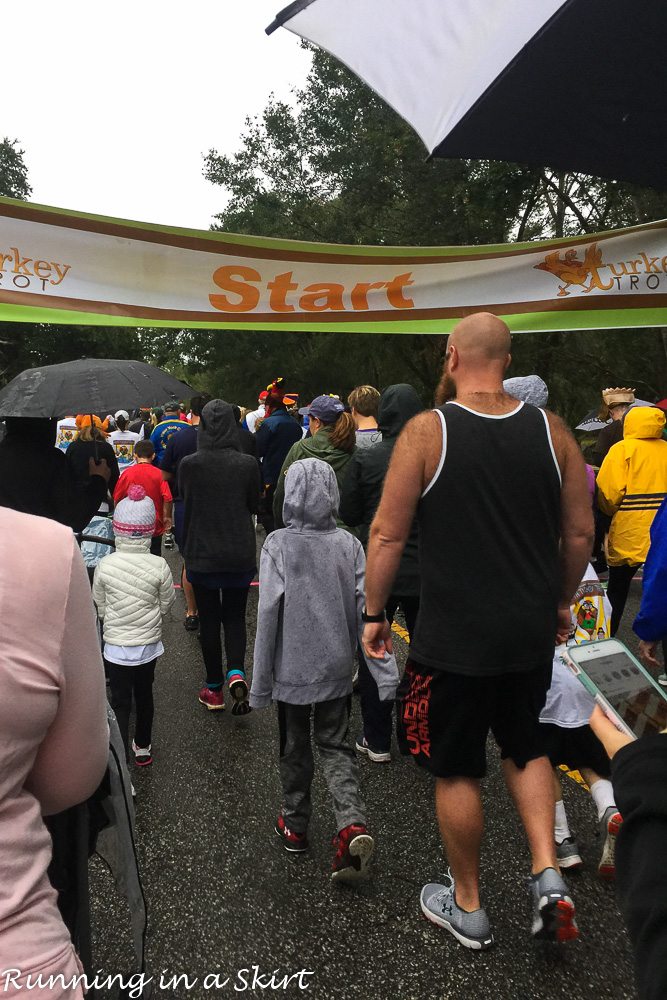 There was a big crowd and when our group got separated in the line up, I decided to start near the back with Megan, Danielle, Ty and Owen in the stroller.  I was super impressed with the size of the crowd even with the rain.

My plan was to run with my small group for as long as they kept running and if they took a walk break to keep moving on.  As the race started it was so much fun to see how excited the kids were. 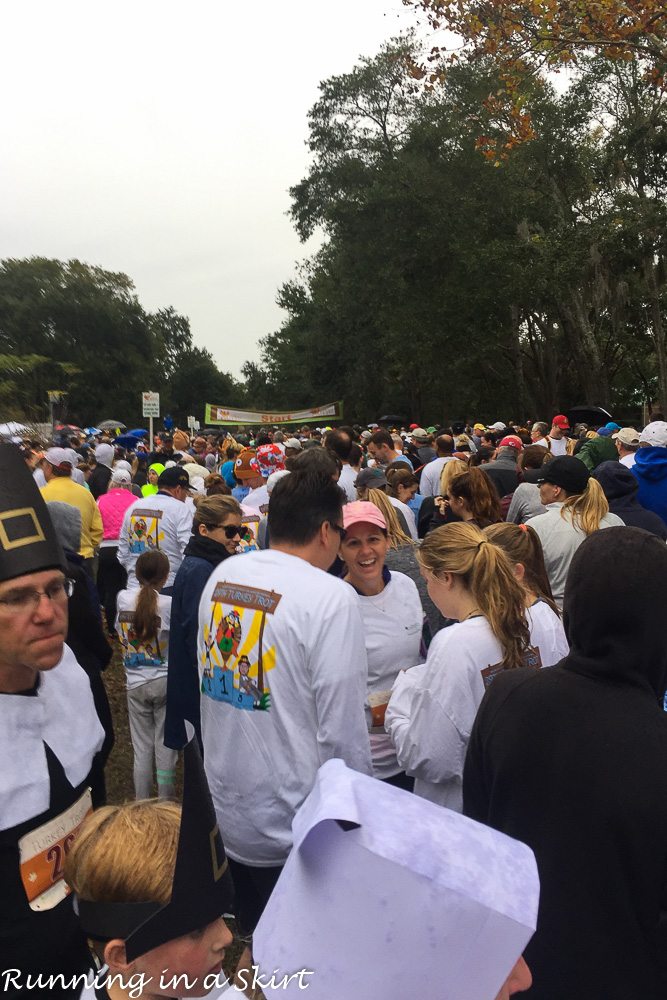 After the first quarter mile my nephew Ty, who is super athletic, was wanting to run faster, so I let his Mom know we were going ahead.  He promised me he actually wanted to run the race so we look off.   We ran for nearly the entire race with just a few short walk breaks.  It was his first race and he did so good and finished really strong.  I didn't start a watch or check splits or anything because that's not what the day was about though.

I really enjoyed getting some one on one time with him too.  Since I wasn't really planning on racing anyway it was totally worth it to take the walk breaks to help him see the joy of running!  He even said he wanted to run more races.   I honestly think he could be a great runner and would smoke me really soon if he decided running was something he wanted to embrace. 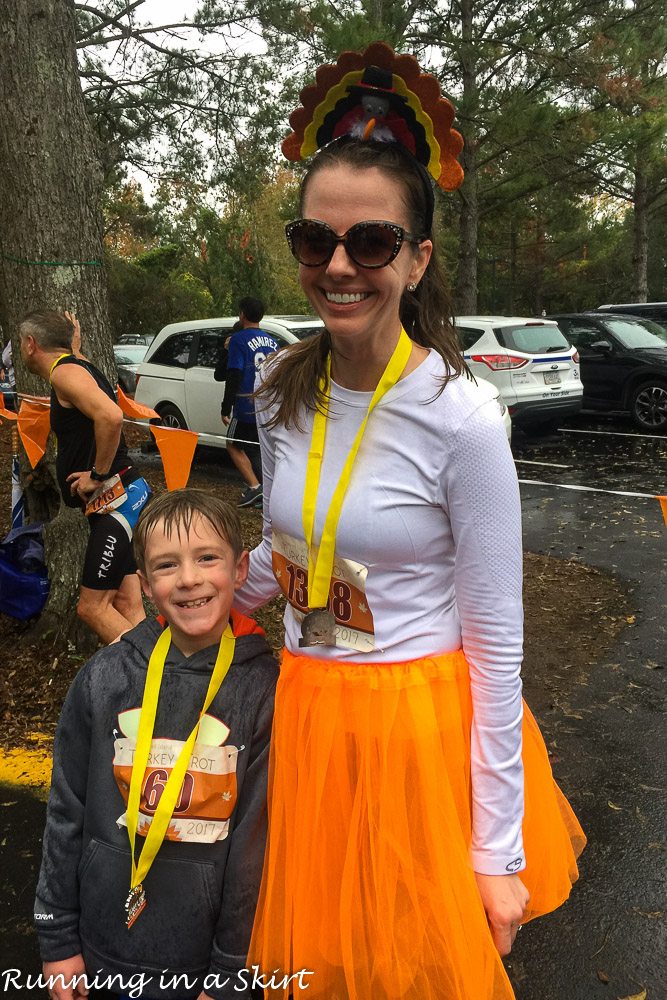 My friends Sommer, Dan and their son Carson also did amazing in the race.  Carson and Dan ran super fast and I could not be prouder of them! 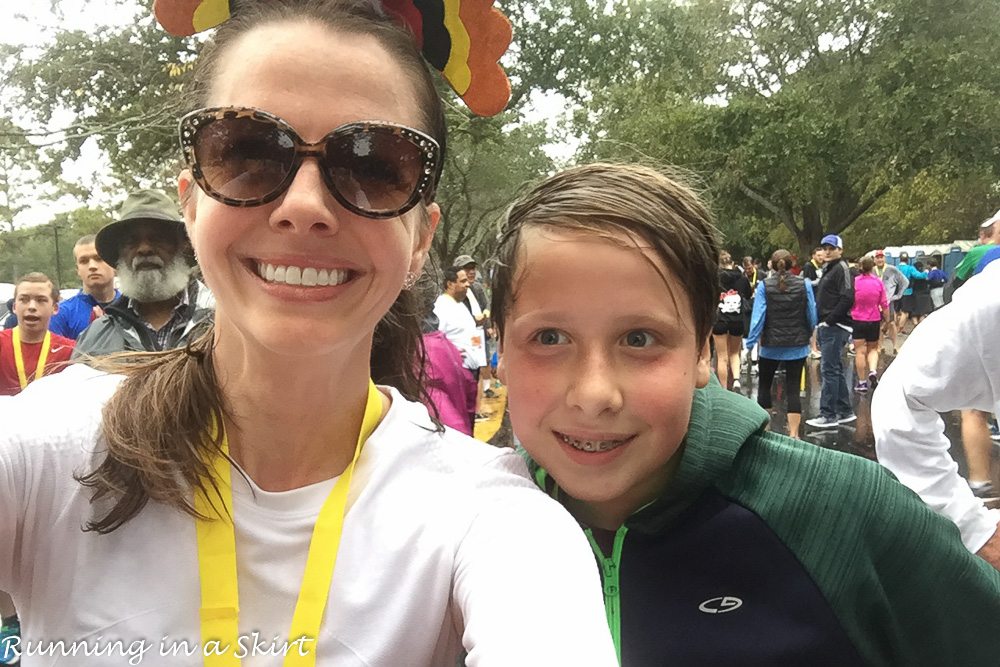 One of the best parts about the Hilton Head Turkey Trot was everyone got medals.  I'm a sucker for bling!  You don't see a lot of participant medals for 5K's in Asheville, so it was pretty fun to get one. 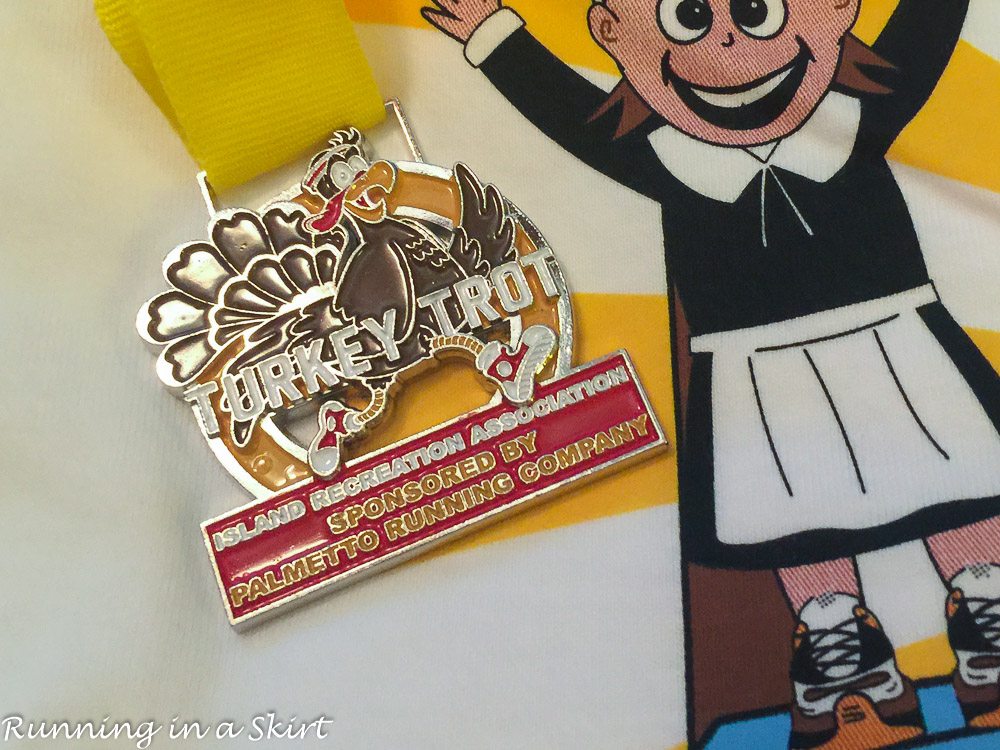 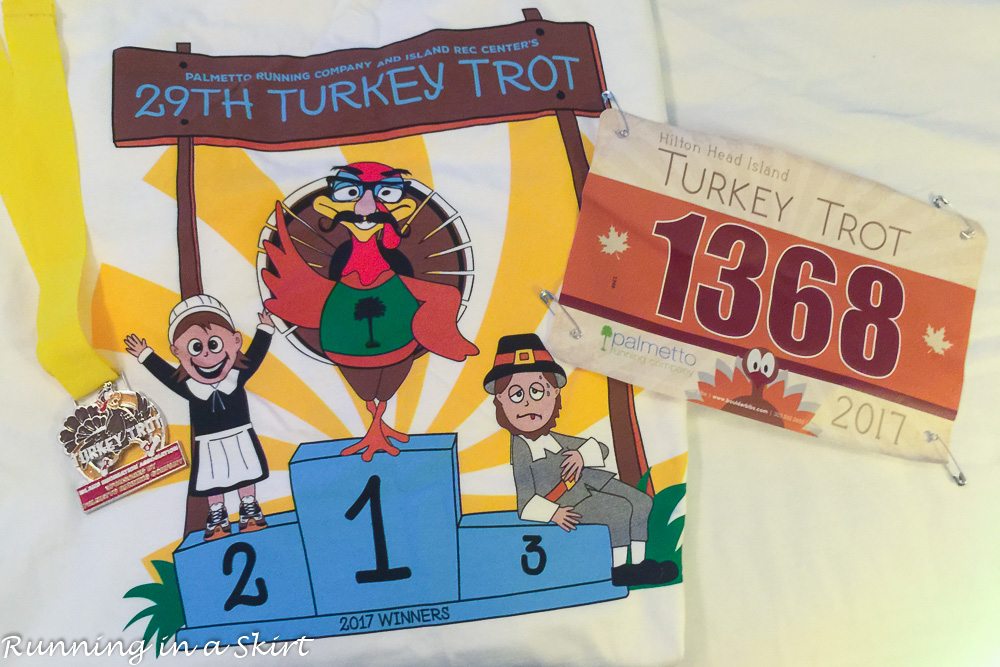 Even better though was getting to spend time with my family, sharing my love of running and finding a perfect way to stay active on Thanksgiving.   Once we got moving it honestly didn't even bother me that it rained the entire race.  I've run a lot of races in my day and honestly this one was one of the funnest I've ever done.

It's moments like these that stick with you for a lifetime. 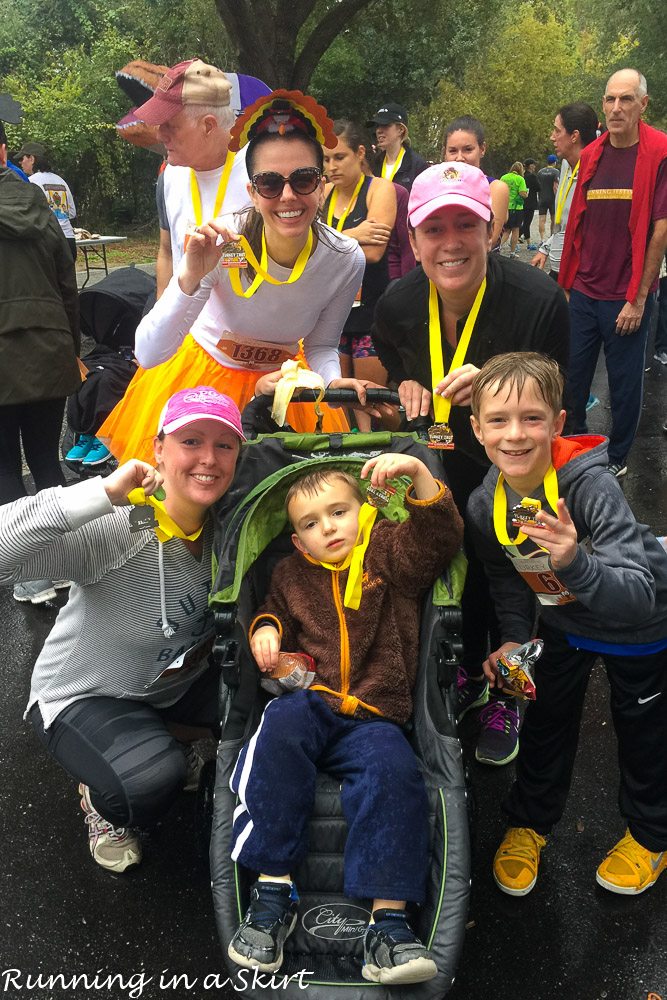 I'm hoping we can somehow make a Turkey Trot or race part of a new family tradition.

Have you ever done a turkey trot?