Just over a month ago, I told you about how my Grandmother, Bea, had a heart attack, was in ICU at the hospital, and needed heart surgery to repair a leaking heart.

So many of you reached out, letting me know that you were praying for her and my family during such a difficult time.  I want to thank you all for the thoughts and prayers.  They meant so much to all of us.  Her situation was changing on a daily basis and it never seemed like the right time to write an update because there was so much uncertainty over what was going to happen.

When my Grandmother first had the heart attack, doctors told both my Grandmother and my family that she was not going to be able to go back home again.  They felt there was enough damage to her heart, that without surgery, she would need hospice care.  It’s a gut wrenching thing for anyone to hear.  I love Bea so much.

Doctors underestimated my Grandmother.  Bea changed her mind several times, but in the end, decided she didn’t want to have the heart surgery now.  She is in her mid 80’s and the surgery would be so hard on her.  You can’t fault her for not wanting to go through it.   Bea just wanted to go home.

Her condition kept improving and doctors eventually released her to a rehabilitation center.  She arrived at rehab in an ambulance and after a two week stay, she walked out of the facility on her own.  Don’t tell my Grandmother she can’t do something, she will prove you wrong.  Maybe that’s where I get it from.

Bea is back at home, where she wants to be.  Her heart is still leaking, so we all know this is just a temporary fix.  But for now she is doing as well as can be expected.

No one can say I don’t believe in miracles. 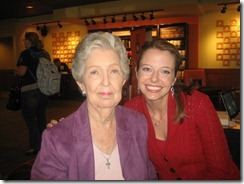