After a nice relaxing weekend, It’s time to focus on the big weekend race.  Look what I got! 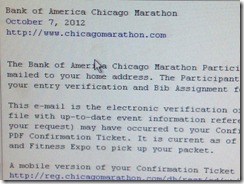 These people say I signed up to run 26.2 miles on Sunday.

That’s nuts. Did I really do that?

The dogs are thrilled, but they haven’t figured out that they aren’t going yet. 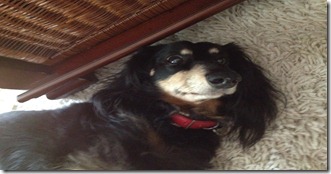 Hey Mom, I know you are busy, but you should probably rub my belly right now. 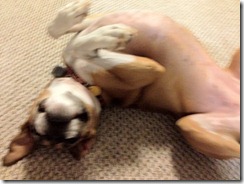 A marathon! That sounds like so much fun, I’ll run it with you!

And with all the excitement in the house for the marathon, It’s the perfect time for Marathon Monday!  Ta-dah!!!!

Today’s installment is from my friend Rebecca Mayernick.

She is a super fast Asheville runner who is temporarily living in Germany for work.  When I first started thinking about running she encouraged me and offered some much needed guidance.

Now she is offering more awesome advice and sharing her marathon story… including how she qualified for Boston on her first marathon run!  So awesome.

Thanks Rebecca for sharing your story!

My first marathon was somewhat of a last-minute decision. I had just completed the Blue Ridge Relay in the fall of 2008 with five awesome friends, when my friend Karen suggested that we train for a marathon that was 6 weeks away, Ridge to Bridge in Morganton, NC. Her arguments were pretty convincing - we had already done some great training for the relay with long runs up to 15 miles and high weekly mileage, I had run 26 miles in the relay (although it was broken into 6 chunks), it was an "easy" downhill course which could help us achieve Boston-qualifying times, and she could get us registered even though the race was full. 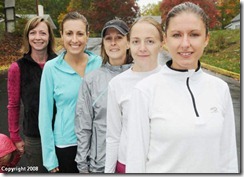 So the week after the Blue Ridge Relay, Karen, our friend Kim, and I started our marathon "training plan". For me this consisted of a pretty normal weekday run schedule and a long downhill run on the weekend. To prepare our quads for the downhill course, we would drive up on the Blue Ridge Parkway, drop off a car, and run down to Karen's house in West Asheville. Karen's husband, Erik, had the pleasure of bicycling uphill to retrieve the car.

I managed 3 long runs of 15, 17, and 20 miles before I got tendinitis in my knee and had to start my taper early. My last "long run" was actually an 11-miler on the elliptical machine. After 3 weeks of elliptical training and too much carb loading, I felt pretty unprepared to run a marathon.

The morning of the marathon was cool and foggy... and dark. It was too early! Much earlier than I wanted to be riding a bus to the top of a mountain to run down it. The race started, and Kim and Karen took off. I stayed back a little but was still running much faster than my goal pace since the downhill course pulled me along. The first 13 miles were beautiful... and fast.

The second half of the marathon was supposed to be "flat to rolling". I found this to be an inaccurate description, particularly in mile 17 which was a full uphill mile. This is where things got really tough for me. It was a small race with only about 150 runners so everyone was pretty spread out by then, and it got very lonely walking up hills with trashed quads. I managed to run a good portion of the second half but much slower than the first half. When the finish line came in sight, I was never happier to see anything in my entire life. After crossing the line, the first thing I said to Kim was "I am never running another marathon again!". She responded that I had to run another one because I had qualified for Boston with a time of 3 hours and 33 minutes.

As convinced as I was that I would never run another marathon again, about one month later I registered for Boston. Looking back now, I am so glad I did. Training for Boston, making the trip with 3 wonderful friends, and running the race were all part of an amazing experience for me. Since Boston, I have run two more full marathons and many more half marathons. The training doesn't always go according to plan, and you don't always get a PR, but I can assure you that every marathon is a special experience that you never forget. 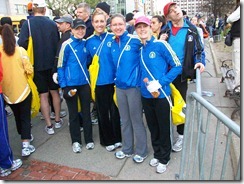 I am on marathon-hiatus right now due to a crazy work schedule and a move to another country, but I would like to get back into it next year. I'll be sure to pick a "destination" race location, invite good friends, and set multiple goals so that I can achieve at least one!

Julie, I wish you the best in your first marathon. You will love it (and may hate it at the same time). My advice to you is to set more than one goal for yourself because after all of the training and hard work, it would be a shame to be disappointed in yourself for missing a time goal. I have gone into my marathons with a time goal, a goal to not walk, and a goal to finish - I am proud to say I usually achieve 2 out of 3. 🙂