When I started running Sunday morning one of the first things going through my mind was... what I was going to call the 18 mile run blog post?  I have to admit my initial ideas were a bit ambitious; “18 Amazing Miles” or “18 Mile Run – Today was a Fairy Tale” were the front runners.  Turns out that was a serious case of optimism on my part because by mile 8 those titles were way on the back burner.

Now I don’t want you to worry, I finished the run and I didn’t feel that bad afterwards.  I’ve had plenty of BAD runs, especially way back in
April and May for my 9 and 10 milers.  My 18 miler wasn’t bad, but it was tough and I had to put some serious physical and mental power into keeping my goal pace.

I got up early because, while it was a mild morning in the 60’s, I knew as soon as the fog burned off that the sun was going to be blazing.  I had the runners breakfast of champions. 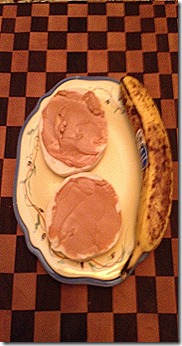 Oh, peanut butter, how I love you!

I head out and it’s still dark.  I haven’t had a lot of time to think about this run with everything going on, but I know I need to get my game face on.   I kept thinking that 16 miles was fine, so 18 wasn’t going to be that much different. 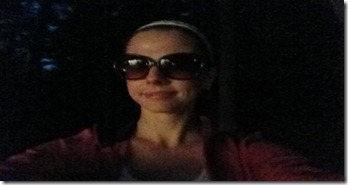 Woops, I keep forgetting sunrise gets later and later this time of year!

And, wearing the sunglasses seemed like a good idea at the time….

I put on my game face and gear. 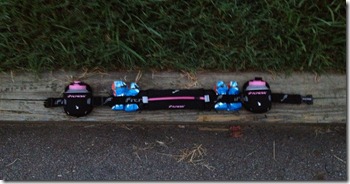 Yes, I know this resembles a glorified fanny pack.

The fashion gods are frowning on me.

I felt very quick and light when I started my run and probably went out a little too fast.  I caught myself making my legs slow down frequently.  By mile 5 this light feeling is long gone and my hips are starting feeling stiff.   I also started feeling the small blister on my foot that had popped up on a random 8 mile weekday run a couple weeks ago.  It’s a problem I have been having on and off since June.  I had coated my feet in the anti-chafing stuff and put a piece of mole skin on the problem area. But even with those precautions, I could feel it getting sore.

But I kept running…. and running… and running.  I stayed with my plan of gu every four miles and water every mile.  Eventually, I found if I was not paying attention to my pace I would start to fade off to almost a minute slower than my goal pace.  I had to really pay attention to keep my feet moving forward.  I focused extra attention on my form because my gut feeling was that the end of the run was going to be tough.

I was right.  I was feeling those miles at the end.  My hips were tight and I knew something was going on with my foot.  I did push through and made my last mile one of my strongest.

When I got home I was scared to take off my socks, thinking I was going to have a popped blister with raw skin.  What I found was much grosser in my opinion… a pretty large blood blister.  I really didn’t even know that was possible.

This is where I should put a picture of my gross blister, but who really wants to see that anyway….

Instead, here is another picture of Rhett and Reina because they are way cuter than my foot.

Today I dealt with the blister because it was pretty red.  I had a doctor look at it and it needs a little tlc (I’m once again sparing you gross details.)  I’m going to take a couple day break from running to let it heal back over.  I think that will be good for my foot and my tired legs.  Sometimes your body is trying to tell you it needs a couple days off.

I wasn’t upset that this run was tough though.  Although I did mutter to my husband…  “why am I doing this again…?” just once while I was stepping into the ridiculously frigid ice bath.  But I think sometimes in running, a struggle may be good for you.  I had to fight fatigue, stiff hips and a gross blood blister on my foot.  I proved to myself that I can be tough and stay with it.  I didn’t slow down or stop… I fought for my 18 miles.  So my 18 miles may not have been amazing, but it felt strong.  And I’m proud of that.

Leave Comments below or answer these questions….

How do you overcome challenges like those I face on this run?

Runners— Have you ever had a “strong” run?